A Dispassionate Analysis of CAA 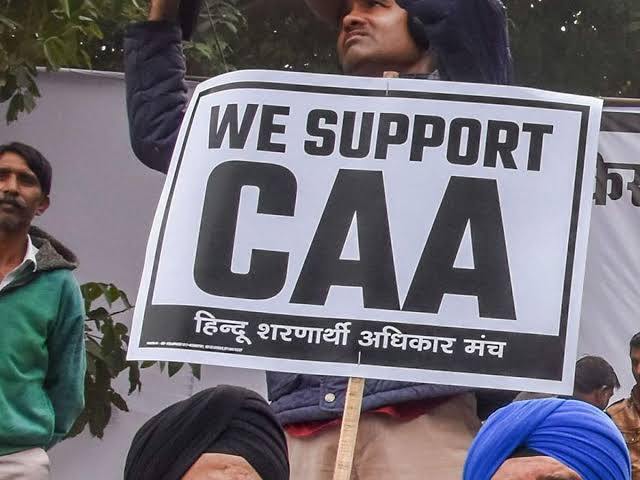 The media reports suggest that India has been witnessing turmoil in the aftermath of the Parliament passing the Citizenship Amendment Bill, 2019. Much of the protests which are going on are on the premise that the Amendment Act fundamentally violates the basic principles of the Constitution and it is exclusionary in terms of religion. Here, I would like to dispassionately analyse the Citizenship Amendment Act, 2019 from legal dimension.

Whether the CAA violates Article 14 of the Constitution

Coming to the issue regarding violation of Article 14, as eminent lawyer and jurist Harish Salve says, “You don’t have the same law for the lion and the lambs”. This basically takes us to the proposition that equals have to be treated equally and unequals ought not to be treated equally.[1]  This is considered to be the essence of Article 14. Hence, when the UNHRC says that the Act is ‘fundamentally discriminatory’, there can be no denial. One will have to consider it in the light of ‘positive discrimination’ which is one of the accepted methods across the world to guarantee equality.

The CAA seeks to classify persons belonging to six communities from the three theocratic states. My limited understanding of identifying these six communities, apart from citing the Nehru-Liaqat Pact is that-

The fact that these communities are considered to be religious minorities in their home country cannot be contested. The contention which may arise is that whether these communities have been victims of religious persecution in these three countries. For all practical purposes, we may refer to the Rome Statute to understand the meaning of persecution.

“Persecution” means the intentional and severe deprivation of fundamental rights contrary to international law by reason of the identity of the group or collectivity. (Emphasis mine)

In the present case, the groups identified in the Act are believed to have been persecuted by the reason of following their own religious belief and belong to those religious groups which do not follow the tenets of Islam. This forms the identity of each group collectively.

I would like to cite the report of United States Commission on International Religious Freedom (USCIRF) on Pakistan. It is important to note that the same USCIRF interestingly raised concerns over the Citizenship Amendment Bill, 2019 which provides citizenship to the religiously persecuted minorities from Pakistan. In its report on Pakistan, it stated-

“Hindu and Christian women were particularly vulnerable to [kidnapping, forcible marriage, and rape] because of the societal marginalization and lack of legal protections for religious minorities”.

Additionally, a document prepared by the UK Home Office says that religious minorities are disproportionately affected by the misuse of the blasphemy laws, which are frequently used for personal or political gain. It further says, “whether or not a blasphemy charge is found to be true, the accused, their family and the whole community may be at risk of vigilante violence.” This amounts to systematic discrimination of people which is beyond any threshold of any democracy, but for Pakistan. The whole object of the blasphemy law is based on the premise of systematic religious discrimination which effectively denies the fundamental right to freedom of thought and religious belief. Apart from this, non-Islamic religious structures have also been desecrated and destroyed in Pakistan and Afghanistan. One can list several other documents to suggest severe deprivation of fundamental rights. It is important to note that the decrease in population figures have not been cited in this article.

Considering the people of six minority communities in these three countries have been severely deprived of their fundamental rights by the reason of belonging to other religious groups, it can definitely qualify as religious persecution.

Lastly, if one refers to the Joint Committee Report on the CAB, it will be clear that the Intelligence Bureau has categorically stated that 31,313 people will benefit from this Act. It has also been stated that all of them belong either of the six communities specified in the Act. Going by the data available, one can infer that the members of these six communities have been seeking citizenship by the virtue of religious persecution.

Therefore, I believe that the reason of identifying these six religious communities can be justified with reason and data.

In order to pass the test of Article 14, two conditions are to be fulfilled when it comes to reasonable classification-[2]

The six communities mentioned in the Act can be distinguished from the others clearly, as they are declared as minority religious groups in all the three countries. They can be grouped together and distinguished from others. It is important for us to note that the Parliament cannot be held liable for not including Ahmadis in this group as they are not declared as non-Muslims in all these three countries.

One important objection being raised is that the bill does not explicitly state that these six communities have been grouped together because of the reason that they face religious persecution which leads to ambiguity. However, the Statement of Objects and Reasons clearly says “…many persons belonging to Hindu, Sikh, Buddhist, Jain, Parsi and Christian communities have faced persecution on grounds of religion in those countries. Some of them also have fears about such persecution in their day-to-day life where right to practice, profess and propagate their religion has been obstructed and restricted.” The context provided clearly signifies the legislative intent which the Hon’ble Supreme Court will have to consider. The justification provided by the Hon’ble Home Minister in the Parliament also indicates the legislative intent. When we construe the ‘legislative intent’ with the provisions of the Act, the object sought to be achieved by the enactment of the Act becomes clear.

Hence, it is not arbitrary and unreasonable to classify members of these six communities who stand in a different position when compared to their Muslim brethren in their home country with justified intelligible differentia.

Whether enacting it for religious minorities from only three countries justified

Another objection that has been raised is that the law extends only to people belonging to minority communities from three Islamic countries and not extend its application to religiously persecuted minorities from other countries like Myanmar. In order to understand this, I would like to draw a comparison to the application of the Scheduled Caste and Scheduled Tribe (Prevention of Atrocities) Act, 1989. This Act provides protection only to members belonging to either Schedules Caste or Scheduled Tribe, but does not include the Other Backward Classes (OBCs) which also comprises the religious minorities. Similarly, application of ‘creamy layer’ in reservations are applicable to the OBCs and not the SCs/STs (presently pending in the Supreme Court). A supposedly generic law like the Right to Education is not applicable to minority educational institutions. Therefore, class-specific laws are not new to the Republic of India.

The Hon’ble Supreme Court has held that it is not necessary for all laws to be general in character and have universal application.[3] The Parliament is not forbidden from classifying and distinguishing for the purposes of legislation. Hence, the Parliament cannot be held liable for not providing this benefit to either the Ahmadis from Pakistan or for Rohingya Muslims from Myanmar.

To put things in perspective, if the Parliament in future believes that the Rohingyas are not a threat to the national security, and should be given a relaxed window to apply for citizenship, it can use its discretion to enact it only for Rohingyas subject to other laws in force.

The Amendment to Foreigners Order, 1948 as a precursor to the CAA

Many of them who are objecting to the present amendment are not aware about the amendment made to the Foreigners Order, 1948, in 2015 by inserting Section 3A which reads as follows-

Exemption of certain class of foreigners. (1) Persons belonging to minority communities in Bangladesh and Pakistan, namely, Hindus, Sikhs, Buddhists, Jains, Parsis and Christians who were compelled to seek shelter in India due to religious persecution or fear of religious persecution and entered into India on or before the 31st December, 2014………….are hereby granted exemption from the application of provisions of the Foreigners Act, 1946 and the orders made thereunder in respect of their stay in India without such documents or after the expiry of those documents, as the case may be, from the date of publication of this order in the Official Gazette”

This order of the government clearly provided immunity to those people who fled Pakistan or Bangladesh due to the fear of persecution from being deported. It is also important to note that the Calcutta High Court has already pronounced an order upholding the immunity given by the virtue of the applicability of this order. Hence, taking this amendment order into the context of Citizenship Amendment Act, 2019, would help us to get a clearer picture of the object sought to be achieved.

In order to make sure that ‘passion’ to propagate one’s own idea does not override the details of the law, which mostly has been the case with the protestors today, I have refrained from using political rhetoric but for the concluding paragraph. I have cited reports of the western world since it has become important for some people today to have our domestic policies and laws approved from them. While ‘people with humanity’ can be critical of this article for flawed legal analysis, I for once know that they have been deprived of a chance to insult religious symbols or the people who hold constitutional positions in their attempt of critiquing this.

Since the matter is already pending in the Hon’ble Supreme Court, let us leave it to the wisdom of the judiciary to determine the validity of the CAA instead of doing it on streets.