Announcement: IndiaFacts Seminar on the Persecution of Hindus 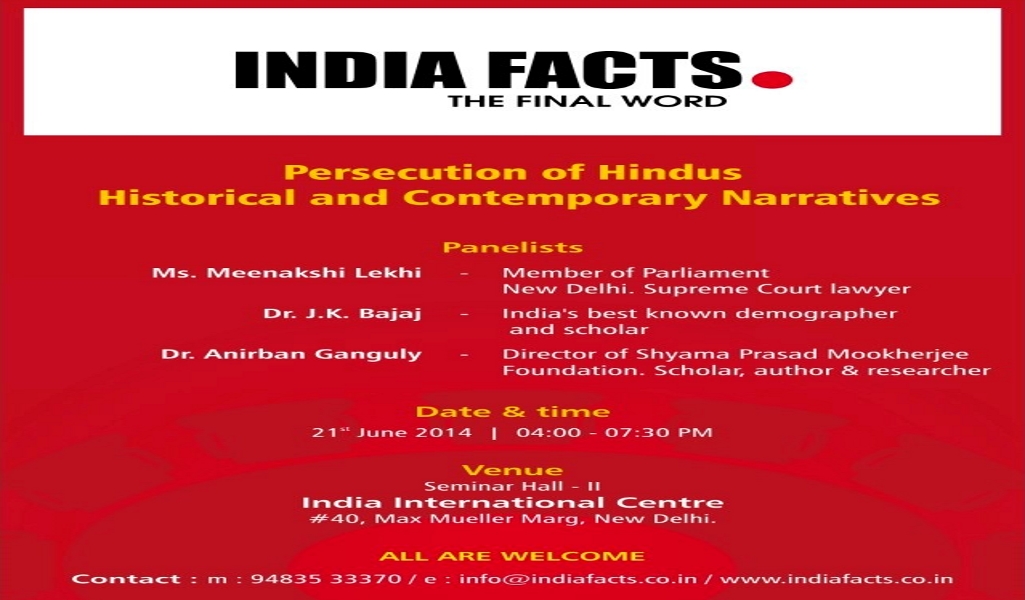 No article or book on the history of the Hindus is complete without Will Durant’s legendary quote on the medieval conquest of India by Islamic invaders:

The Islamic conquest of India is probably the bloodiest story in history. It is a discouraging tale, for its evident moral is that civilization is a precious good, whose delicate complex of order and freedom, culture and peace, can at any moment be overthrown by barbarians invading from without or multiplying within.

What is equally valid is Jadunath Sarkar’s observation that the British colonization of India was an event in which the control of India merely changed hands–from Muslim rulers to the British.

The common factor remained the same: the seemingly unending persecution of Hindus in their own homeland, a nightmare which continues till date.

Indeed, in the present day, the persecution of Hindus in their own homeland continues with a somewhat abated physical vigour but is carried on insidiously. The consequences of a certain brand of politics practiced over 60+ years has created yet another danger: of large sections of elite Hindus who have directly and tacitly aided and abetted in the persecution of Hindus even to this day. Indeed, what no history book or mainstream narrative mentions is an evident fact:  that Pakistan was the triumph of precisely this persecution of Hindus.

As we observe events unfolding in the country, it is clear that Kashmir has been ethnically cleansed of Hindus, and the Sikhs living there are subjected to regular threats from Islamist groups. Down south, Kerala presents an alarming picture of rapid Islamization and frequent attacks against Hindus. West Bengal is worse. It appears that Hindu persecution has received state patronage. The archives in IndiaFacts showcase the exact nature of this persecution.

Yet, our mainstream media and the intelligentsia continues to turn a blind eye to this absolute, ongoing horror.

IndiaFacts in keeping with its commitment to restoring decency in public discourse and exposing and correcting distortions with regard to Hinduism has therefore organized a seminar and question and answer session on the topic. Here are the complete details:

The event is free of charge and open to all.  No registration is required. The invite is given below.