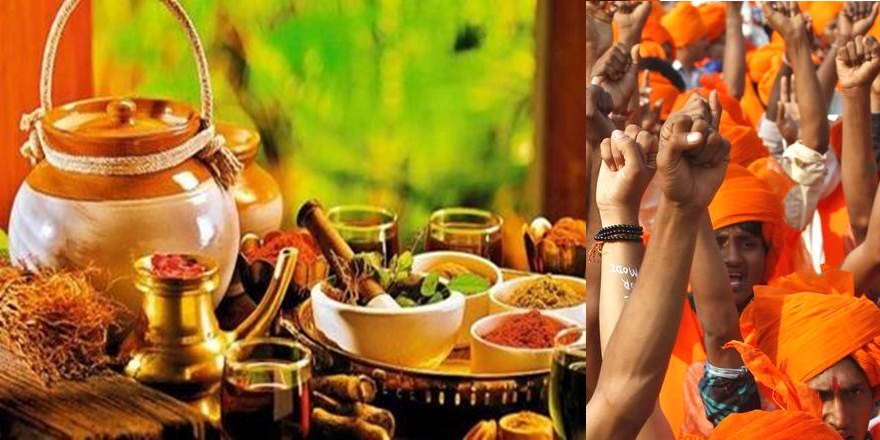 These claims have been made in a research paper in an academic journal[1] by Joseph Alter who is the professor of medical anthropology at the University of Pittsburg, USA. When Prof Alter presented the paper in a seminar in Canberra, I questioned his claims which he struggled to defend.

Any research is undertaken to answer a research question which is usually situated in a research framework. Once clearly defined, it guides further steps such as data collection, data analysis, and drawing conclusions about the research question at hand. Interestingly, by reading the paper of Prof Alter one gets the feeling that probably the conclusion to be drawn was decided in advance and a story was built around it.

The arguments that were made during the seminar as well as my subsequent thoughts on his paper are enumerated below.

Prof Alter states that the paper is grounded in the philosophical work of Michel Serres (2008)[2]. He also cites Latour (2004, 2005)[3],[4] to advance his argument. However, as Latour (1995:1)[5] states in his first conversation with Serres, ‘you map out a path, you go everywhere-the sciences, mythology, literature-but at the same time you often cover up the traces that led you to your results’. The reader may unfortunately come to similar conclusion after reading Prof Alter’s paper.

The motivation for the research is unclear

It is an established practice in any research to spell out the motivation that prompted the researcher to undertake the research. Motivation is the key as it helps situate the paper in an appropriate theoretical framework. It should persuade the reader and provide the rationale for the work being undertaken. Unfortunately, the author doesn’t make that clear and the reader is left in the lurch. Had Prof Alter not made the startling claim in the concluding paragraph that ‘Ayurveda invokes and provokes nationalism’, I may not have read the paper.

For example, in the abstract, he writes (and provides also a taste of his convoluted writing) as follows: ‘this article presents [a] an analytical perspective on the embodiment of viscerality [b] to provide a more nuanced understanding of how these experiences blur distinctions of cultural continuity and [c] how an ecology of the body shapes the cultural politics of tradition in India’.

But in the introduction, he states that ‘[d] I take up the question of body in relation to medical practice and nationalism [e] arguing that an affectively visceral relationship between the body and environment can profoundly contradict the supposedly logical relationship among culture, health, and medicine in the imagination of a community and in the political ideology of state nationalism’.

Yet in the conclusion he states that the [f] ‘main point of this article has been to disambiguate the body and the embodied experiences from the politics of nationalism’ and [g] ‘to develop an analytical conceptualization of viscerality so as to better understand the different ways in which the body is implicated in the politics of health and culture’.

As is obvious, (a) and (g) above don’t really match, as the former is about providing an analytical perspective on viscerality embedded in the body while the latter is about developing a conceptualisation of viscerality itself. We can’t provide a perspective on something that is not conceptually well developed, can we? Similarly, in (b) above he refers to cultural continuity but later in (g) mentions just the ‘politics of culture’.

Again, (a) to (c) don’t refer to ‘nationalism’ at all. While nationalism a political sciences construct can manifest itself in terms of ethnic, cultural, religious etc, ‘state nationalism’, the term he uses, is often construed as a euphemism for ‘fascism’. Is the intention here to somehow link everything Hindu including Ayurveda to fascism and hence draw the conclusion that it promotes fundamentalism? ‘State nationalism’ gets a mention only once at the beginning of the paper but is soon forgotten in the rest of the paper.

Even if Prof Alter is researching multiple research questions in the same paper, there needs to be a coherence between them. One can’t solve all problems in the world in one research paper, can one? The confusion is quite apparent. I am persuaded to believe that the purpose of the paper is not really to enlighten on a topic by posing a researchable question but to keep it aims/objectives/questions vague and then to draw outlandish conclusions such as Ayurveda breeds fundamentalism.

The author uses a variety of constructs drawn from diverse disciplines such as health practices (nature cure, Ayurveda, viscerality, yoga), sociology/anthropology (culture and cultural practices), political science (nationalism, state nationalism, neo-orientalism, fundamentalism, and globalisation), Hindu philosophy (sankhya, Vedic revivalism). While any research that stands at the intersection of various disciplines is welcome and can potentially bring new knowledge, the last of these constructs – Vedic revivalism- suddenly emerges in the concluding paragraph without any mention thereof earlier in the paper. Interestingly, Prof Alter uses it to claim that Ayurveda invokes and provokes nationalism and Vedic revivalism. There is no well-reasoned argument throughout the paper establishing a link between these two concepts – Ayurveda and Vedic revivalism.

It is well known that Adi Sankara –the proponent of Advaita Vedanta (circa 800AD) is largely accredited with Vedic revivalism and countering of the Buddhist view point. At that point in time, the notion of nationalism was alien to the Indian culture. Hindu revivalism was also spearheaded by social reformers[6].

Prof Alter explains the term nationalism on p2 of his paper. He then states that the term ‘visceral nationalism’ has been used pejoratively to describe passionate and often violent instinctive responses. One wonders why he didn’t cite the work of Wilk (1993)[7] who used the term ‘visceral’ nearly 20 years prior to Prof Alter’s paper to draw a distinction between the official vs visceral by Wilk (1993). According to Eriksen (1993)[8] Wilk used the term to draw a distinction between political vs personal nationalism or formal vs informal nationalism.

Prof Alter then goes on to state that while ‘nationalism’ per se is an irrational idea, ‘visceral nationalism’ goes beyond it and according to him it is the ‘very antithesis of reason’. Interestingly, he doesn’t provide any historical evidence to support his claim. Is he referring to the ‘visceral nationalism’ of the Nazi Germany to develop this construct? It is important to clarify this since he uses viscerality as the analytical tool in examining Ayurveda. The paper gives the impression, assuming his claim is logical, that visceral nationalism is something that is unique only to India and relevant only in the context of Ayurveda. Interestingly, while labelling nature cure as ‘cosmopolitan’ while Ayurveda as invoking and provoking ‘visceral nationalism’ is he not becoming visceral in his argument to show ‘hegemony/superiority’ of nature cure which he wrongly ascribes to European origin?

Latour (n.d./86)[9] commented on Michel Serres “it is impossible to distinguish who is providing the explanation; is it the commented text or the commentary”. The reader may have similar feeling when reading Prof Alter’s paper. It is only in the concluding paragraph that we come to know the method used by Prof Alter to gather evidence to answer the research question. He states that ‘based largely on re-reading of textual material, the analysis presented here is nevertheless informed by several decades of ethnographic research on the relationship among the body and various manifestations of power… over several decades of ethnographic research I have encountered numerous wrestlers, yogis, healers, and Gandhian social workers…’. It is obvious that he used convenience sampling and consequently ‘heard’ what he wanted to hear. Would gathering selective evidence to prove one’s point qualify as research? Interestingly, I raised this issue when I attended Prof Alter’s talk in Canberra in May 2016. I asked why he didn’t consult Ayurvedic academics and researchers in India to check whether his claim that Ayurveda ‘invokes and provokes nationalism’ is tenable. There was no response. I also asked whether his paper is refereed by suitable Ayurveda academics and researchers for which again there was no response.

Furthermore, a normal practice in ethnographic research is to present the rich text of responses and these were coded, categorised and what major themes emerge from the data analysis that help in answering the research question posed are clearly indicated. Unfortunately, the paper is devoid of all these normal precautions that a researcher takes leaving the reader wonder how the claims were made and supported. We just have one grand statement from Prof Alter that the paper is based on re-reading of relevant texts and his interactions over 20-year period with a myriad of respondents.

From the paper it appears that Prof Alter didn’t visit any Ayurveda hospitals/colleges/universities and there are many notable, for example, Tilak Ayurved College and Nanal hospital in Pune, (Urali Kanchan near Pune was one of the areas where Prof Alter conducted research), Podar Medical College in Mumbai or the Gujarat Ayurved University in Jamnagar. Did he interview patients who come from a variety of economic backgrounds and religious ethnicity? How many of those he sought responses from, what were the demographics of the respondents? We believe this group was very vital given the claims he is making. Similarly, what questions did he ask to assess whether ‘nationalism has become visceral’? Were these questions pilot tested?

He does mention about Nisrgopchar in Urali Kanchan and Arogya Mandir in UP – both of which are nature cure centres. How many patients did he interview, we have no clue from the paper, neither we have a clue how many patients in each group (Ayurveda group and nature cure group) he sought responses from.

On the background of the above, it is surprising that he makes a bold claim that he found nature cure to be cosmopolitan and Ayurveda to be soaked in visceral nationalism, neo-orientalism and fundamentalism in one big breath!

Second, he seems to imply that nature cure was unknown to Indians and that only after a book was first compiled thereon in Germany by Just and others and a copy was handed in to Gandhi. After Gandhi advocated it, nature cure became known to Indians. However, many elements of nature cure were already known to ancient Indians. Pancha Karma is an essential routine in Ayurveda and does capture nature cure. Furthermore, fasting (a major element of nature cure) is already imbedded in Indian life style from ancient time. These traditions are passed on from one generation to another for ages. It is possible that the compilation of varied nature cure practices was first attempted in Europe but how does that make it a ‘European’ concept as Prof Alter claims?

Besides the above, I noticed a few more issues that are worrisome.

Going by the analysis contained in this rebuttal, one can conclude that Prof Alter’s work is seriously flawed, and I wonder what his real motivation was in writing the paper. Incidentally, the very next day that he presented the seminar, he was to address the participants in Christian Yoga class. The entry thereto was restricted so I couldn’t attend it.

Note: The rebuttal was sent to Body & Society editor who advised that the editorial board considered it but decided against publishing. No reasons were assigned.

[3] Lantour, B, (2004) Politics of Nature: How to bring the sciences in to democracy, Cambridge, MA, Harvard University Press.

[4] Lantour, B. (2005) Reassembling the Social, An Introduction to the Actor-Network Theory, New York: Oxford University Press.

[16] Ramanama is reciting the name of Lord Rama. It is a typical Hindu practice to invoke the name of God (here Lord Rama) throughout life. This practice is going on for ages.

A New Assault on Ayurveda

Time is Ripe for Deeper Look at Indian Knowledge Systems