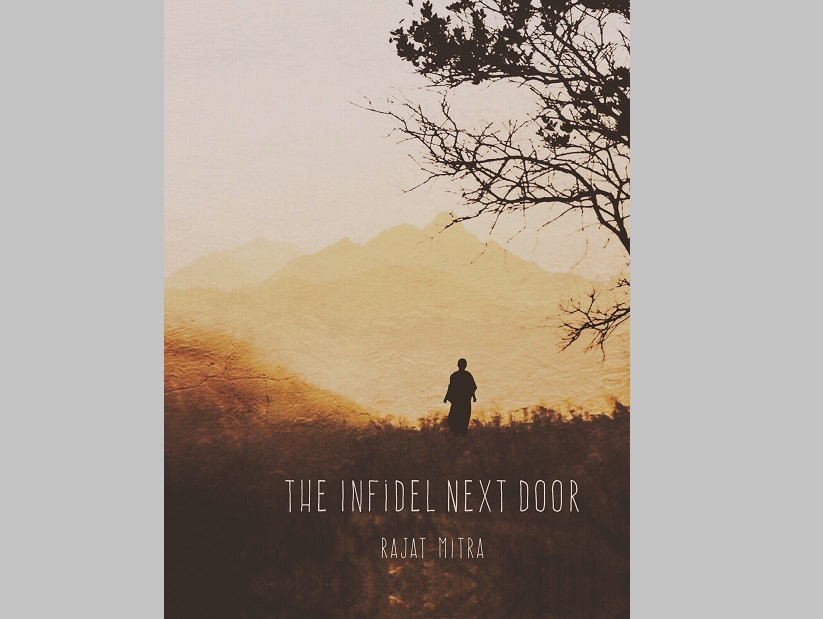 The Infidel Next Door by Rajat Mitra is available on Amazon.

The Infidel Next Door opens with an arranged marriage between a sick orphan girl and a shy boy; but it quickly evolves to embrace more than two lost souls finding each other; because between them there are deeply abiding secrets that keep each at arm’s length even as they learn that neither can hide or keep secrets about their past.
Replete with Hindu gods, temples, and religious perspectives, and a young boy who serves as both a miracle and a reminder of life’s fragility, The Infidel Next Door weaves through Indian culture and perspectives as if in a delicate dance, each step precisely described and compellingly intriguing.
When a temple is built next to a Muslim mosque, creating forces that confront one another on many levels, the story really earns its laurels as characters so carefully crafted earlier in the tale begin to comprehend the magnitude of the changes in their world and what it means to their choices and lives: “Remember what I taught you about infidels? It is Allah’s will that your fight begins on your doorstep.” “I will cast terror in their hearts as it is commanded in the book,” Anwar said. “It is a priest and he has a son who are coming next door. They won’t be a match for you.” “I will convert him to Islam and if he doesn’t obey, I will drive them away from Kashmir.” Haji chacha looked him in the eye. In a steady low pitched voice he said, “Inshallah, you are fortunate. You no longer have to imagine an enemy. He will come right next door to you. Your struggle will be unique in the annals of jihad.” “Why chacha?”Anwar asked. “Because a warrior comes alive through knowing that his enemy is big, real and more dangerous than he thought him to be.”
From caste systems to secrets surrounding births, defiance and difficult love relationships, and the challenges of children to either follow in or divert from the paths of tradition, The Infidel Next Door is alive with thought-provoking insights throughout, cemented by characters who struggle on many levels: “Aditya, you are like those distant mountain peaks. They look beautiful but one can’t live there. I want to remember you as someone who liberated me.” “That is not love, Zeba.” “Every woman, Aditya, falls in love with the man who teaches her to live. He then should live in her memory otherwise their relationship loses meaning.” “Zeba, this will be a living death for us.” “I know that. I have to be loyal to my husband inspite of thoughts of you that are there in every corner of my mind.” Tara came near and said to Zeba, “The light in your room has been switched on.”… She decided not to open the curtains and look outside again and closed the light. That was her past. There comes a time in everyone’s life when they have to close the curtains of the past. “I will give myself a chance, to my marriage, to this relationship with Salim,” she said, as she switched off the lights. It was better she stayed in the darkness.”
From traditions that clash to miracles and murders, The Infidel Next Door weaves a tight story of social, spiritual and psychological changes which are tinged with disaster and discovery at every turn.
One needn’t be familiar with Indian society, Muslim or Hindu religions, or even with regional Indian social and political forces in order to appreciate this compelling story, which draws together disparate lives and cross purposes in an engrossing saga that’s hard to put down and especially recommended for any Westerner who would better understand the subtler nuances of Indian society.
Disclaimer: The opinions expressed within this article are the personal opinions of the author. IndiaFacts does not assume any responsibility or liability for the accuracy, completeness, suitability, or validity of any information in this article.