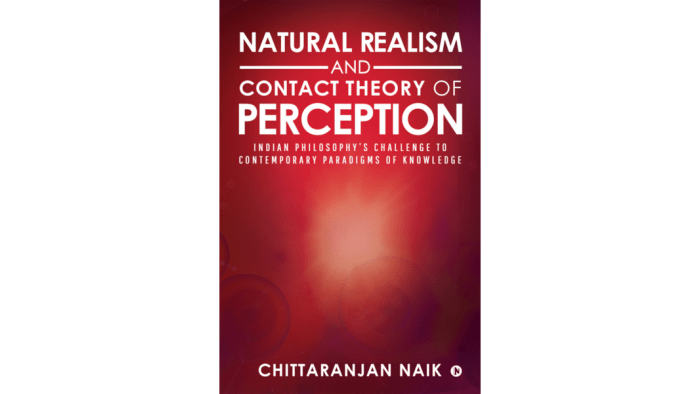 Natural Realism and Contact Theory of Perception by Chittaranjan Naik has been published by Indic Academy and is available on Amazon.

I would caution the reader to not be intimidated by the title of the book, for it may appear to be a micro-analysis of a subject matter that is far from interesting. That is primarily because of our preconceived notion that, perception is a universally settled matter and there could be no possibility of any contrary view pertaining to the matter. This book, from the very first sentence, takes off at a tremendous pace – as it is nothing short of a compelling intellectual thriller! The preface of this book is an inseparable portion as it lays down the sophisticated framework of the Vedic worldview. It has been broken down is such a way that even a first time reader would be able to grasp the subtlety of the subject matter, which otherwise requires a sharp intellect and years of study to comprehend.

There have been no attempts to question the validity of the western academic tradition whether it be of philosophical or scientific in nature. The philosophical skepticism of the west, over the years have inevitably overlapped into the scientific methodology, as demonstrated in this book, owing to the lack of a sophisticated framework in either of the systems. The philosophical skepticism has transformed into scientific skepticism, because of which ‘science’ is still incapable of explaining the hypothesis it postulates. So, it is apparent that we are not obligated to accept without questioning, the contemporary worldview held by scientists.

The author challenges the contemporary view of science at its most vulnerable point – the theory of perception. The Vedic philosophical worldview has been dismissed with contempt by both philosophers and scientists – ironically, without countering it. It might seem to be very strange that the author uses the same framework of Pramanas that is used in Vedic philosophies to counter the scientific worldview and yet upholds a theory, which is consistent – epistemologically, ontologically and metaphysically. Furthermore, this is one of the key points of this book which has a much larger implication, which the reader will discover towards the end of the book.

Most contemporary scholars of Indian philosophical tradition often claim that Vedas are scientific, but only superficially, without offering anything in support, thus reducing such claims to be a mere rhetoric. Consequently, academicians and scientists may dismiss such claims as pseudo-science. The author on the other hand takes the bull by the horns and thereby dismisses the scientific theories as unreasonable and establishes the conformity of the Vedas with Truth and not with unvalidated scientific theories.

The author, like a seasoned commander of an army, proceeds to strike at the heart of the dogmatic scientific theories which have been taught to us as gospel truth, with incisive precision. By using familiar terminologies and a straightforward style of writing, the author distills his enormous scholarship and makes it easy for even a layperson to easily read and comprehend. There is no prior understanding of either Indian or western philosophical systems necessary for the reader. This book can be classified under one of the unputdownables as mysteries of esoteric subjects like Shabda pramana are unravelled gradually and breaks the shackles of blind belief. It can be read in a single sitting, however, the mysteries unravelled will compel you to stop and ponder. Our whole worldview is turned upside down as it decimates the misconceptions and lays bare the shallowness of theories which are not supported by proper framework.

The sixth chapter of the book will not only put the lay reader in awe but even the experts in the field of Vedic philosophy. The stimulus theory that the brain processes the neural signals from the eye – falls flat and even the view of science on consciousness breaks apart, thus marking a paradigm shift.

The author clarifies, that although it is indeed a paradigm shift, the Vedic worldview has always upheld this in their Darshanas.There are severe and far reaching implications on not only the contemporary scientific views but also on contemporary views on Vedic Darshanas. The author has convincingly and precisely argued that the lag or delay in perception is untenable and that, perception is immediate as per the contact-theory of perception, which the author proposes. If you think I have spoiled the book for you, wait till you read the sixth chapter. But the extent of the implication does not stop there because, while explaining the contact theory of perception, the author has brought into the discourse, the entire Vedic framework along with its darshanas. So what is the greater implication?

We have all witnessed the emphatic way in which the scientific community has upheld the absence of the role of a sentient being on the pretext of negation of causality. So the narrative is reduced to scientists vs philosophers or science vs religion. Chittaranjan Naik bravely confronts this atheistic worldview which none of the philosophers including Vedic scholars have done until now. The author handles the most difficult topic of the law of causality in such a pragmatic way that it conforms to both reason and methodology. While the law of causality is determined to be only apparent and not absolute, the final conclusion is radically opposite to the atheistic worldview and instead emphatically declares the self-luminous sentient being as the absolute.

Notwithstanding this disruption in contemporary theories, many Vedic philosophers too, will be obliged to defend their philosophical positions as the author sticks to one particular darshana thus giving the contact theory of perception a level of consistency and coherence. This book poses an immediate threat to The departure from a cognitive nature of Vedanta to an empirical one among contemporary Vedantins. To further break it down, it upholds the validity of Shruti pramana. The arguments in this book can be compared to the mimamsakas of antiquity, who rescued the validity of Shruti pramana from the vitanda of logicians. It is for this reason that this book is of paramount importance, even without the artificial marketing gimmicks employed. A truth seeker, will certainly cherish the wisdom in this book, whether one agrees with the author or not.