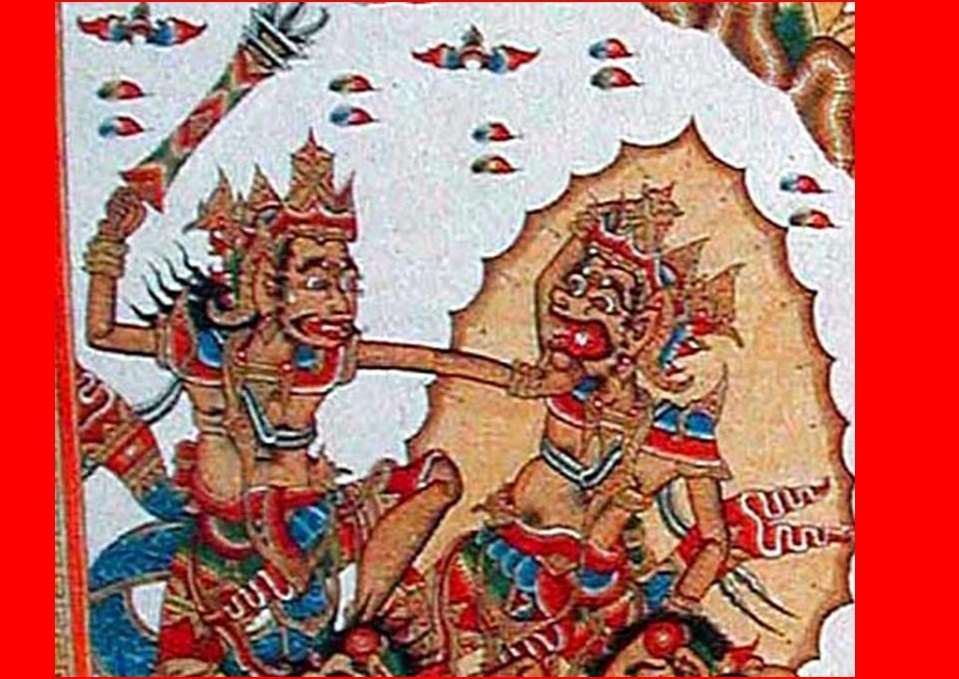 What is a paradox? According to Wikipedia, a paradox is “is a statement that, despite apparently sound reasoning from true premises, leads to an apparently-self-contradictory or logically unacceptable conclusion.”

As an example, consider the Liar paradox where a liar makes a statement, “This statement is false.” If the liar is lying, as is his nature, then the statement is true, in which case the liar is lying, and the statement is true, which it is not, and so on… Or take its related version – “You must reject this statement I am now making to you, because all the statements I make are incorrect“. It’s a favourite of mine (it appeared in a short story, “The Monkey Wrench”, by Gordon R Dickson, in the August 1951 issue of ‘Astounding Science Fiction‘). What is the consequence of a paradox? In the case of the “Monkey Wrench”, not very good, at all.

The Ramayana contains at least one instance where we witness a paradox in the making. An impossible situation arises that is averted, and which leaves one wondering, “what if”.

The story is described in Sarga 20-22 of Uttara Kanda, the last kanda in the Ramayana. Interspersed in this story are several other fascinating nuggets that are worth sharing.

Given a boon of invincibility by Brahma, Ravana proceeded on a campaign of conquest. That conquest led him to Ayodhya where he killed its king, Anaranya. Even as a boastful Ravana taunted the dying king, Anaranya uttered a curse that would eventually become the cause of Ravana’s death at the hands of Rama. Another curse would be the reason why the rakashasa king could not possess Sita, despite abducting her.

Seeing the destruction Ravana was wreaking on earth, sage Narada counselled Ravana, telling him that killing humans on earth was pointless – “People on earth are under the subjugation of death and have already been killed.” Thus egged on by Narada, Ravana decided to proceed to rasatala and fight and kill Yama there. This seems to be what Narada had in mind all along, for he goaded Ravana further – “If that is where you want to go, why follow any other path now?” and then, “Follow this path to Yama.” The “path to Yama” can be interpreted metaphorically as the road to death. This piece of cunning was typical of Narada. First, he had saved the mortals on earth from further depredations by Ravana. Second, he had succeeded in convincing Ravana to go to the land of death – literally and figuratively!

However, once Ravana had departed, Narada started to wonder about the epic encounter that loomed between Ravana and Yama. “How can one cause injury to Death?” was the basic question in his mind. He decided to proceed to Yama-loka to observe this duel. Even as he explained to Yama the reason for his visit, Ravana’s Pushpaka vimana could be seen approaching in the sky. The first thing that Ravana did was to free the most wicked among the dead who were being punished for their deeds. A veritable army of the un-dead.

As the battle raged, Yama decided to enter the battlefield, astride his “gruesome chariot“, and the sight of which “brought fear to the three worlds.” Along with Yama was his Kaladanda – the rod of chastisement. The battle began between the invincible rakshasa and Death.

The duel raged for seven nights – neither was killed, neither defeated, neither retreated. Yama finally became enraged and raised his “invincible” Kaladanda in his hand and readied to bring it down on Ravana.

It was at this moment that Brahma intervened. Why? Let us follow his argument. Brahma had granted a boon to Ravana, making him invulnerable against the gods, rakshasas, danavas, daityas, yakshas, serpents, and even birds (Ravana perhaps had Garuda in mind when he asked for protection from birds). Yes, Ravana was not invulnerable against humans, but that is a separate story. It was Brahma who had also crafted the Kaladanda – and it was “invincible” in “bringing down all creatures.” If brought down on someone, the Kaladanda would kill him.

Thus, if Yama brought down the Kaladanda on Ravana, one of two outcomes were possible – either Ravana would die, or he wouldn’t. In other words, what would happen if Dashagriva the immovable object came face-to-face with Kaladanda the irresistible force? Either the Kaladanda would prevail or Ravana would. Both could not emerge victorious. Could Kaladanda, the invincible rod of death, kill Ravana the invincible? A paradox, you would agree.

We never get to know because Brahma requested Yama to not proceed with his act of bringing down the Kaladanda on Ravana. Whatever the result, Brahma argued, “a falsehood will be committed.” Yama acceded to Brahma’s request. He did not bring down the Kaladanda against the “roamer in the night“.

Yama withdrew from the battle, Ravana declared victory, and Brahma’s paradox survived unchallenged. Are there are any other instances of paradoxes in the Ramayana?

Note: the events described in this article are taken from volume 3 of Bibek Debroy’s translation of the Baroda Critical Edition of the Valmiki Ramayana, published by Penguin.