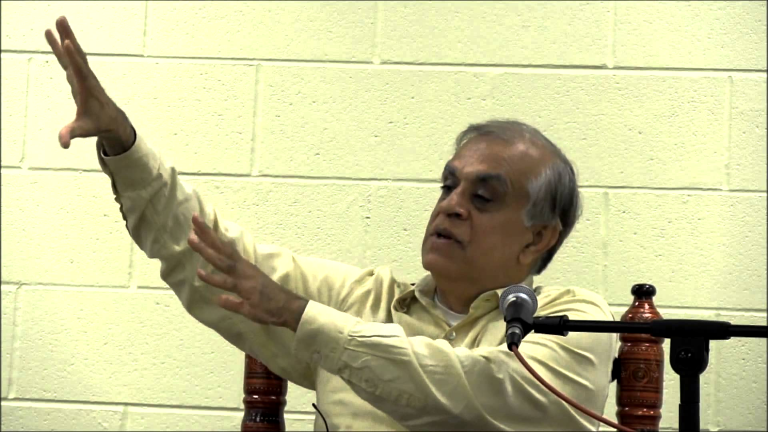 Note: To those of you that are aware of the background of our relationship with Rajiv Malhotra, we would like to reiterate our commitment to protecting our Dharma from all forms of attacks and hence this piece finds an unhesitating place on our platform.

When you see someone furiously pounding the table, you’d be justified in thinking that he has taken that advice too seriously, and conclude that neither the facts nor the law are on his side.

The fact is that in any battle — of wits or muscle, figurative or real, defensive or offensive — one leads with the best device at one’s disposal. In desperate situations, clutching at straws may be the best one can do when one is in over one’s head and lifeboats are missing. That clichéd image comes to mind seeing the recent charges of plagiarism against Rajiv Malhotra.

For those who are not familiar with Malhotra, he’s the author of ‘Breaking India,’ ‘Being Different’, and other books. Wikipedia notes that he’s an ‘Indian-American author and Hindu activist who, after a career in the computer and telecom industries, took early retirement in 1995 to found The Infinity Foundation. Through this organization Malhotra has promoted philanthropic and educational activities in the area of Hinduism studies. Malhotra has written prolifically in opposition to the academic study of Indian history and society, especially the study of Hinduism as it is conducted by scholars and university faculty, which he maintains denigrates the tradition and undermines the interests of India.’

I know Rajiv Malhotra and have deep respect for him. I am convinced that he is a serious seeker of knowledge and understanding. I know him sufficiently well to be absolutely certain of his integrity, his commitment to scholarship, his dedication to the cause of engaging ‘the other’ in serious discussion, his principled challenge to all to engage in purva-paksha: ‘a tradition in dharma discourse [which involves] building a deep familiarity with the opponent’s point of view before criticizing it.’

Even to me, a lay reader and an outsider to his area of investigation, his competence is clear. But domain experts too attest to his diligence and expertise. I urge you to read some of the reviews of his book ‘Being Different: An Indian Challenge to Western Universalism.’ Quote:

In this substantial work Malhotra explores a variety of topics inherent to Indic culture and worldviews. He reflects on many aspects of the Hindu world. His goal is not only to dismantle misconceptions, but also to formulate a new paradigm for intercultural discourse. . . . Malhotra begins by referring to a number of his own personal encounters with Western scholars and individuals in conferences and elsewhere to let the reader know how, through means subtle and overt, Christianity and the West have been intruding into the sacredness and integrity of Indic culture. Not that many Indians are not aware of this, but this book gives it all raw and ruthless exposure. It unveils aspects of what it sees as Western hegemonic intercultural ruses that may not be as obvious to superficial observers. These revelations are sure to jolt both unwitting Indians who may have held Western civilization in high regard, as well as scheming Westerners who may feel awkward being caught.

So one may wonder, what accounts for the spurious charges of plagiarism leveled against him by his detractors? Paradoxically, the attempt to discredit Malhotra by silly accusations of plagiarism in essence gives indirect support to the fundamental solidity of his incisive arguments. His opponents have failed to counter his thesis and in their desperation have had to resort to serious harassments. Having neither the facts nor the analytical skills to counter the thesis, they are reduced to idiotically pounding the metaphorical table in their frustration. If charges of plagiarism is the best offensive weapon they have, they deserve pity and maybe even a little bit of sympathy.

To be quite frank, I have little time to waste on the trivialities that Malhotra’s opponents have published, such as the one by Sandip Roy at FirstPost on 15 July.

‘Not my monkey, not my circus‘ is my motto. Granted that the antics of the circular firing squad of flying attack monkeys (to borrow a phrase much favored by Prof Brad deLong) is an entertaining distraction but really, we do have real problems that need addressing. I will not waste time showing how vacuous their charge of plagiarism is. Others have done it. Malhotra has addressed charges, such as this one, “Rajiv Malhotra has a rejoinder to Andrew Nicholson” (July 18th). Besides, there is no need to elevate their inane nonsense by actually quoting them.

So am I wasting time writing this? Not at all. My primary motivation is to express solidarity with the cause that Rajiv Malhotra has been tirelessly engaged in for decades. He is one among that rare breed of intellectuals who are willing to challenge the orthodoxy where it is substantially wrong; an orthodoxy that is slavishly and uncritically accepted by those whose minds are still colonized by a narrowly conceived Western narrative designed to denigrate and devalue Indian contribution to human knowledge and understanding. Malhotra provides the serious, intellectually sound, necessary corrective pushback to that worldview. Which naturally gores their precious goat. That partly explains their fury and their animosity towards Malhotra.

My secondary motive for writing this is my belief that public discussions should be accurate, honest, decent and intelligent. To oppose those with an agenda to poison the well of public discourse is a sacred duty to me. If we don’t speak out against what we perceive to be false and malicious, how will we discover what is true and valuable? I stand with Edmund Burke, the Irish statesman and philosopher, when he wrote in 1770, ‘When bad men combine, the good must associate; else they will fall, one by one, an unpitied sacrifice in a contemptible struggle.’

The circular firing squad of flying attack monkeys (FAM) has chosen Rajiv Malhotra as its target. We must note that the target is the man, not his thesis, because the FAMs, having failed to counter his thesis, have been reduced to firing specious charges of plagiarism at Malhotra. But indirectly, we are also targets of their random acts of senseless shootings. By not opposing them, we tacitly acquiesce to their implicit demand that we bow and obey their paymasters. By using the word ‘paymasters‘ I grant them this much dignity that I don’t believe that they would so abjectly debase themselves without being paid for it.

These charges against Malhotra are a distraction, a tiny scuffle in a minor battle that doesn’t amount to a hill of beans in the larger context of the civilizational war that we are forced to be in.

I think I speak for a majority when I say that I’d like to be left alone, to live and to let live. But unprovoked opposition to us and our civilizational ethos has been a historical reality. It is also historically true that those who oppressed India had the help of Indians. Indians are also involved in this petty attack against India. This batch of Indian flying attack monkeys will disband but there can be no doubt that new batches will form and new targets identified. That is as certain as the fact that ultimately we will prevail.

This was first published on the author’s blog, Atanu Dey On India’s Development.