Dholkal Ganesh and the Sad Tale Of Apathy 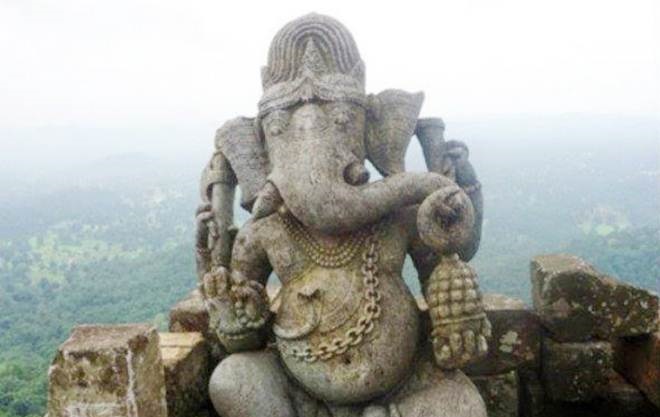 Fifty-six stone fragments lying forlornly on a blue tarpaulin. You can see the vermilion mark still on the part that used to be the face, as the trunk turns gracefully. A fragment that formed the large stomach still has the remnants of the snake coiled around it. The stone fragments are all that remains of a one thousand year old Shri Ganesh Moorthi of Dholkal, a remote place in the jungles of Bastar in Chattisgarh. So, what happened to the Ganesh, you might ask.

Well, it is a tale that has been repeated many times in the history of India.

The Dholkal Ganesh is the latest victim of the systematic vandalism and destruction of Hindu icons and objects of worship. For centuries, the Islamic invaders achieved this with great precision, and now we, the people of India, are doing the job ourselves! The perks of being independent, you see!

The Dholkal Ganesh was carved during the 9th and 10th century, during the reign of the Nagvanshi Kings of Bastar.  It was a six feet tall monolith weighing more than 500 kilos. Carved out of solid block of granite, the Moorthi stood on its majestic circular perch in the thick, impenetrable jungles of Bastar in Dantewada district of Chhattisgarh state. Revered by the local tribals, the Moorthi was first rediscovered by the British geologist Crookshanks, while surveying the area before opening the Bailadila mines, way back in 1943.

However, after independence, the Ganesh Moorthi again vanished from public memory, till a local journalist rediscovered it in 2012 while on a trek. The discovery created a sensation. So exquisite was the Moorthi, and so enchanting was the setting that it soon became a favoured destination for pilgrims, history lovers as well as adventure seekers. Chhattisgarh tourism started featuring the Moorthi prominently in its travel programs.

Dholkal Ganesh Moorthi became an icon for the state. An increase in tourism meant employment opportunities for the local people, revenue for the state and prosperity. Many tribes in the surrounding areas found gainful employment as guides and tour operators. The forest was suddenly full of a steady stream of people, trudging up the path to pay their respects to the 1000 year old Ganesh Moorthi.

So far, it looks like a beautiful win-win story for all, right? Well, all except the Maoist terrorists who control the Dantewada sector in which lie the jungles of Bastar.

The Maoists live off fear and poverty. The whole Maoist business model works only on the premise of the local tribals remaining poor, ignorant and isolated from the rest of the society.  Film director Vivek Agnihotri has portrayed the Maoist model very accurately in his pathbreaking film, Buddha in a Traffic Jam.

Maoists fear economic activity and progress. The Dholkal Ganesh had ensured progress and prosperity in the region. Suddenly, the forests of Bastar were no longer remote and isolated. The people were no longer desperately poor and without any hope. They had prospects of a gainful and productive employment. The Maoists obviously felt threatened by it. Maoists also hate Hindu faith and culture with a vengeance. So they did what they are really good at, destroy the Moorthi using force.

The mighty Dholkal Ganesh was pushed off its high perch from a height of 13,000 feet. Naturally, it broke into smithereens. The Moorthi that had survived Islamic destruction and British colonialism could not survive independent India! Santosh Misra, an officer with the Culture & Tourism department of the state of Chattisgarh, tweeted ‘Police suspects it 2 be a handiwork of naxals. Busloads of people had started coming to this area.’

The red terrorists that control huge tracts of forests in Dantewada have always tried to thwart any meaningful economic activity in the region. It is natural that they would feel threatened with the increased movement in the jungles. Moreover, the recent demonetisation drive has meant that their own illicit source of funds has stopped. According to newspaper reports, over 500 Maoists from the region have surrendered post demonetisation. The destruction of the Dholkal Ganesh is an audacious move that reflects the frustration in the ranks.

Today, the Dholkal Ganesh lies shattered in pieces. Maybe it will be pieced together again, maybe it will once again be installed atop its high perch. Till the Maoists strike again!

The destruction of the Dholkal Ganesh is no small matter. It is the loss of a 1000 year old priceless work of art. In any other country, there would have been a huge uproar, media would have discussed this vandalism at least for a month. But in India, the story did not even make it to the front page of any mainstream publication.

The very people who frothed at the mouth for weeks when a single stone was thrown at a church ignored the destruction of the Dholkal Ganesh. There were no studio discussions, no indignant tweets, and no threats of returning awards. So what if a Hindu religious symbol is destroyed, who cares? Not even the Hindus themselves!

Last week, I was in Hampi, the ravaged city that once was the capital of the mighty Vijayanagar Empire. Today, its mighty temples and palaces lie in ruins. The city could never recover from the destruction and plunder that it endured for six months at the hands of the Islamic invaders.

I was sitting outside the massive Krishna temple, when an Indian family walked in casually. They cursorily glanced around the broken Gopura, the vandalised figurines on the pillars, the empty Garbhagriha smelling of bats because the Moorthi was destroyed by the invaders. They displayed no emotion, no curiosity, not even a feeling of sadness at the destruction of such beauty. A child from the family dropped the wrapper from the candy he was eating on the temple precincts before they walked away.

‘We shouldn’t only blame the Islamic invaders’, observed my friend, the writer Aravindan Neelakandan, ’they only destroyed this temple once, it is we Indians, who continue to defile our heritage every single day!’

The destruction of the Dholkal Ganesh is just the latest episode in this sad tale of Hindu apathy!