From a falsehood, anything 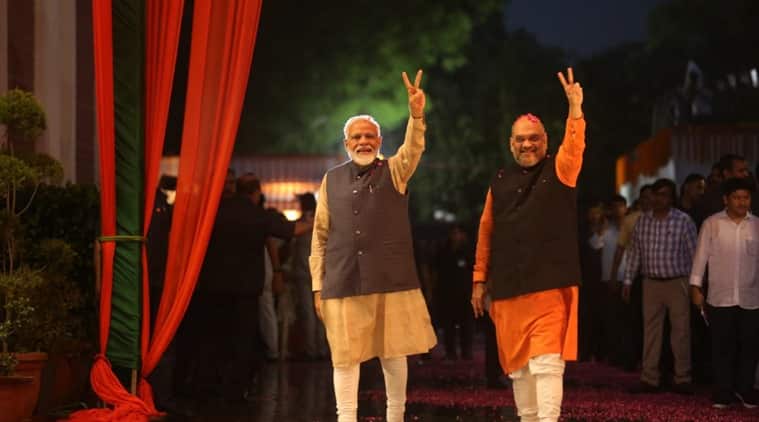 In Classical Logic, we come across the principle of explosion. That is, if one assumes a seeming contradiction is true, then anything that we state can be proved.

‘Either Delhi or Moscow are the capital of India’.

‘Delhi is not the capital of India’

Shri Pratap Bhanu Mehta, leading thinker of our times and the VC of the prestigious Ashoka University, illustrates for us this principle, in the form of this column  in the Indian Express upon the BJP’s return to office for a consecutive second term in 2019.

He utilizes several falsehoods to drive home yet another piece in the endless demonization of one man – Shri Narendra Modi. Much has been written about the man and much will continue to be written about him. What makes this piece stand out is Shri Mehta’s ascribing a superhuman ability to the Prime Minister to even make the Opposition think about him and only about him and his seeming ability to make everything about himself.

He sets his propositions clearly at the outset in the form of three propositions which he then proceeds to defend with dexterity.

Thus are the fantastic conclusions Shri Mehta derives. Let us now examine the falsehoods that he bases these conclusions upon. He brings in his falsehoods very subtly with a sleight of hand that bespeaks of years of experience in such polemics.

To start with, Shri Mehta claims – ‘In these times, civility is a rare commodity and the Congress can be granted that.’ The truth is that the entire Opposition has run the 2019 campaign starting in 2014 itself. The crudity of the attacks on Shri Modi, his family, his personal life, his sartorial preferences, his speaking style, his humble origins, his food habits have startled the common man. He has been called a neech, a saanp, bicchoo, dalal, a gorilla. One wonders where Shri Mehta saw civility in this.

Shri Mehta goes on to say – ‘It is also easy to blame control of institutions, media and money for the BJP’s electoral firepower.’ Yet again, the various investigative agencies, judiciary, election commission have been summarily accused by the Opposition of bias. Most of these have been wild, unprovable allegations. The media have largely continued on their old path, with the same editors who celebrated when Modi contracted swine flu and so on. One wonders how Shri Mehta views Karti Chidambaram’s win in Sivaganga, if not as a victory for money power.

A casual flip through of any Tamil, Malayalam, English TV channel or any of the national newspapers and new media outlets like The Wire or The News Minute would reveal the largely negative image of the man.

Let us look at the next two statements –

‘In sociological terms, this is yet another blow to those who peddle illusions about the power of caste and regional politics. Those identities are breaking down, and ripe for appropriation for the larger project of Hindutva. It is probably also the case that despite the cult of toxic masculinity that characterises BJP’s ideological discourse, Modi upended the politics of gender in new and creative ways. ‘

Firstly, Shri Mehta seems to bemoan the loss of the good old days when election coalitions were stitched together on no ideological basis, merely by appealing to caste and regional aspirations. The AGP, TRS, DMK, BJD, Shiv Sena, TMC are all alive and well, to account for regional aspirations. So are the SP and a number of Dalit issue parties, to account for caste-centered aspirations. That the Hindutva project of the Sangh Parivar is catalyzing a nation’s rising above such differences would be a cause for celebration in any rational country. But, not in this India of Shri Mehta’s. It is not surprising. In the past, such regional parties and caste-based parties brought in the ground support and votes, to help the think tanks and academics focus on creating the policies and draft the legislations that truly governed the Republic.

Next, Shri Mehta has discovered a cult of ‘toxic masculinity’, a Western portmanteau construct that serves to smear an unrelated political movement.

Interestingly, this term grew from psychological studies intended to help inmates of American prisons cope with psychological stress and help them adjust to society in ways that would reduce proclivities to crime upon their freedom from incarceration. Clinically, this characterized by extreme self-reliance, homophobia, urge to dominate others in a social environment, inability to express emotions other than anger, the tendency to devaluate women and the feminine behavior.

This is applied to male individuals who have social adjustment problems. One wonders how a movement that subsumes genders, includes women and has consistently stood for gender equality and struck Article 377 in power is accused of a collective psychological aberration.

On the other hand, the Opposition has included conservative Christian and Muslim organizations that have spoken in favor of retaining the same Art 377.

Shri Mehta now goes on to assert that Modi’s tenure has been one of failures on the economic. As proof, he merely offers up his assertion that the growth rate ‘feels like’ 4.5%. In an economy that routinely features among the world’s fastest growing in consecutive years and with inflation at its lowest in decades, one can only wonder at the falsehood that is offered up. Surely you’re joking, Mr Mehta?

Shri Mehta concludes by saying that the BJP’s 2019 campaign was one of mendacity and hate. He also says that the nation identifies with Modi. If both are true, then Indians, as a nation are hate-filled bigots. That is not much of a hope for a nation. It is, of course, the collective clamour among the media that Hindu India, by electing Modi, has proven itself irredeemably hate-filled and a poisonous society.

If Shri Mehta, along with his fellow-travelers were just to pause and consider the thought that maybe Indians identify with a man from a lower-middle-class background who displays a can-do spirit, optimism, hard work and sincerity?