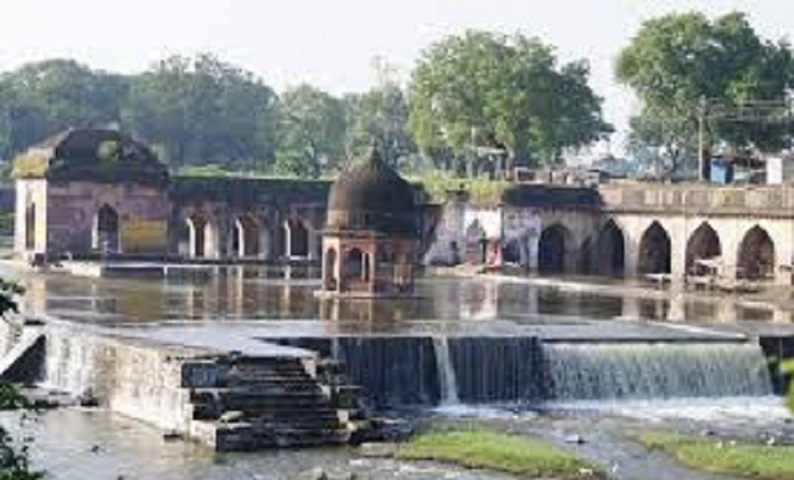 Kalidasa is known as the master of similes. The Sanskrit tradition has proclaimed him as upamAkAlidAsasya. The variety, depth and appropriateness of his similes remains unsurpassed to this day. A study of his similes is itself an education in many branches of knowledge. Instead of confining ourselves strictly to the similes, we can look at the superset technically known as saadrushyamoolaalankara. Drushtanta(Analogy) and atishayokti(hyperbole) also fall in the same category. The following selection from his works is a veritable treat.

Despite being a short lyrical poem, the quality of similes in Meghadutam is of a very high order. We can have a look at a few of them.

The Amrakantaka hill with river Narmada flowing down in multiple streams appears like a big elephant with its body painted in white stripes.

The early morning breeze blowing over the river Shipra in Ujjain is like a lover flattering his loved one with requests to wake up.

For the gods above, the river charmaNvati with the cloud above it, appears like a necklace of pearls adorned with an indraneelamani at the centre.

This is the masterly work where Kalidasa reaches his zenith in his usage of similes. In this work, he provides strikingly apt similes drawn from such diverse areas as mythology, agriculture, grammar, nature, scriptures, astrology, statecraft and day-to-day life.

His mastery over each one of these subjects, is aptly represented by his similes. Beyond strict similes, he has given us some wonderful examples of drushtanta, utpreksha and atishayoktias well. They are all basically rooted in comparison like the simile. Hence, we shall include them also in our examples.

The following selection is a veritable treat.

Me, the dullard, who is yearning for poetic fame will be made fun of just like a short man jumping to reach for a fruit hanging high up.

This work (Raghuvamsham) shall be read by those who can differentiate between right and wrong. The purity or the lack of it in gold is determined only when it is subjected to fire.

Upon the king’s request, sage Vasishtha, with his eyes closed, sank into dhyAna for a moment. At that moment, he appeared as still as a pond whose fishes are sleeping

King Raghu, leading his great army, appeared like King Bhagiratha leading the river Ganga towards the eastern sea. [This simile is very appropriate because King Raghu was heading towards the east on his conquest.]

They (the Vangas), having submitted to Raghu and being reinstalled in their domains, bore rich fruits for Raghu. It was like displacing the tender rice sapling from one side of the paddy field into the other and reaping rich benefits. [This is an actual agricultural process and is very apt for the situation.]

There may be many kings on the earth. But only this king (Parantapa, king of Magadha) makes the earth feel proud. Even though there are numerous stars in the sky, the night feels bright only because of the moon.

In the svayamvara, as Indumati approached each king his face glowed with expectation and excitement. But as she moved on without choosing them, their faces became pale and dejected. [Kalidasa compares this to the flame of a lamp passing through the main city-street, illuminating each home as it approaches it and leaving behind it in darkness as it moves forward.]

For this brilliant simile, the Indian literary tradition fondly assigned him the honorific title ‘deepashikhaakaalidaasa’.

Indumati accepted prince Aja with a pleasant twinkle in her eyes. It was as if her look itself had become the garland of marriage.

When King Aja returned after marrying Indumati, the women of the city forgot everything else and lined up to gaze at him with unabashed admiration. It was as if all their other senses were invested in their eyes only.

Even as Aja was celebrating his marriage with Indumati, his father, King Raghu, handed over the kingdom to him as if he was handing over another Indumati.

The sacred waters by which sage Vasishtha performed the coronation of King Aja fell on to the ground. The aroma that arose from the ground was like the earth heaving its sigh of relief for having gotten Aja as the king.

Now, we shall see the reaction of Dasharatha to the curse pronounced by the blind father of Shravankumara, who is killed by mistake by the king on a hunting mission. The curse was that Dasharatha would suffer separation from his son in his old age.

Revered sir, for me who has not been fortunate to have seen the lovely face of my own kid so far, even this curse of yours is a blessing; at least now I am sure to be blessed by a kid. Your curse is like the forest fire which, despite burning the forest to ashes, only ends up making it fertile for another bloom.

The news of Rama being coronated brought immense joy to each one of his adoring citizens of Ayodhya. It was like a canal which waters the trees in the gardens, filling the water bund created for one tree before moving on to the other and so forth. [This is also very apt – It essentially means that the citizens, overflowing with joy, spread the news from one to the other.]

The two wishes that the stubborn queen Kaikeyi extracted from Dasharatha were like two serpents emanating from their burrows after the rains.[To be noted is the aptness in mentioning the time – It is only after the rains that the snakes enjoy coming out. They will be closeted inside their burrows in the summer to avoid extreme heat.]

Just like the grief-stricken Rama’s wandering thoughts, the army of monkeys sent forth by Sugriva looked for Seeta in every place possible.[The appositeness of this simile should not be missed. Just like there is no place out of reach of thoughts, there was no place that the monkeys did not reach.]

Hanuman, looking for Seeta in Lanka, found her surrounded by rAkShasis. She appeared like a great medicinal plant surrounded by poisonous creepers.

The recognition-ring that Seeta had sent with Hanuman was duly presented by Hanuman to Rama as if he had brought with him the very heart of Seeta.

While Rama was camping on the seaside on his way to Lanka, he was approached by VibhishaNa, the younger brother of Ravana. It was as if the patron-goddess of Lanka had intimately advised him to do it for his own good.

Rama got a bridge built over the sea. It appeared as if the great serpent AdisheSha had risen from under to facilitate the sleep of Lord Vishnu.

The arrows of Rama sent mighty Kumbhakarna to eternal sleep as if telling him – ‘O sleep-loving Kumbhakarna, you were unduly woken up by your brother Ravana for no good reason’.

Because of his many arms, heads and legs, Ravana, though alone, appeared like the entire race of demons lined up.

Further, Kalidasa describes the aerial view from the divine Pushpakavimana when Rama and Seeta are returning to Ayodhya after killing Ravana. Some of the similes served up in that section are worth mentioning and savouring.

Seeta! Look at the bridge constructed by me; It divides the sea all the way from the Malaya (Sahyadri) mountain till Lanka. It appears to me like the Milky Way across a star-lit autumn night.

It was in this very place, while searching for you, that I found an anklet which had slipped off you. It appeared to me as if it was in distress at losing the company of your lotus feet and had hence become quiet.

Seeta! This is Lake Panchapsara, surrounded by the forest on all sides, where the sage Shatakarni moves about. From this distance, it appears like the moon peeking from among the clouds.

With sage Sharabhanga gone, the duty of welcoming and serving the guests is now vested in the trees of his hermitage, which bear fruits and provide shade, comforting the passers-by. It is like the duties of a father being performed by his able sons.

The final simile in the Ramayana section is also fascinating.

Thus, having killed Ravana, Rama dissolved himself into his original form. Before he went, he had established Hanuman on the Himalayas, and Vibhishana on the Trikuta hill in Lanka. They were like two victory towers proclaiming Rama’s greatness.

This simile is very apt because, in our tradition, Hanuman and Vibhishana are considered as immortals. And hence, this simile implies that Rama’s victory towers will be there for all time proclaiming his greatness.

We can conclude the Raghuvamsham fest with a couple of sobering similes from the description of the irresponsible King Agnivarna.

Like the sky a day before the new moon day, like a lake reduced to marsh during summer and like the dying flame of a lamp grazing the lamp itself, the solar race had come to the brink of extinction when Agnimitra fell ill (without a son to take the race forward).

Despite the best efforts of the doctors, the king could not be rescued from the disease. It was like a lamp getting blown off by the wind.

(Continued in the next part)

The author is an Information Technology professional and a student and practitioner of Sanskrit poetry.