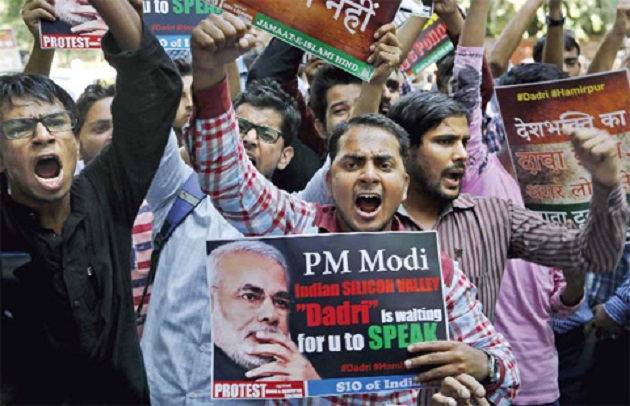 The awesome song – written by Indeevar, sang by Mahendra Kapoor, and picturised on nationalist actor Manoj Kumar – is from the movie ‘Purab Aur Paschim’. I am sure many from my generation have not even watched the movie. In fact some of my friends have insisted I change my hello tune to one of the trendy songs. When I asked my mother whether I need to change the hello tune, she told me that it is so unique and I should continue with that. It has been a decade since I kept the song as hello tune and hopefully I will continue to do so for the decades to come.

Recently Aamir Khan has hit the headlines with his comments on “rising intolerance”. Speaking at the eighth edition of Ramnath Goenka Excellence in Journalism Awards, the 50-year-old actor said he has been “alarmed” by a number of incidents of “intolerance” and quipped that his wife Kiran Rao even suggested they should leave the country.

It is pertinent to mention that on the day Aamir joined the chorus against “intolerance”, US ambassador to India Richard Verma said, “India has been a model of inclusiveness.”

Look at the chain of events. Earlier Aamir’s fellow Bollywood actor Shah Rukh Khan said there is “extreme intolerance” in India. SRK’s comments even prompted LeT chief and 26/11 mastermind Hafiz Saeed to invite him to move to Pakistan if he feels “insecure” in India.

Even as Aamir and Shah Rukh stirred up a hornet’s nest with their comments on “intolerance”, ‘secular’ actress Nandita Das said she does not think freedom of expression has ever been “so threatened”. As if that was not enough, Nandita’s fellow Psecularist Arundhati Roy even went on say that ‘intolerance’ is inadequate a word to describe the present atmosphere of the country.

A wave of dissent has seeped into the country, thanks to this pseudo-secular block. They continue to blame Prime Minister Narendra Modi for the sporadic crimes such as the lynching of a Muslim man for alleged beef stocking in UP’s Dadri, murder of “rationalist” MM Kalburgi in Karnataka and even the August 2013 killing of another “rationalist” N Dabholkar in Maharashtra. Interestingly when UP is governed by a SP government, Karnataka is governed by a Congress government. But, the ‘secular’ intelligencia choose to blame Narendra Modi-led BJP government at the centre to score brownie points despite knowing that law and order is a state subject. The overzealous secularists are so blind in playing the blame game that they are blaming the BJP government at the Centre for a 2013 murder in Maharashtra when the Congress was in power in both at the centre and the state.

Ever since Narendra Modi took the reins of the country, these people have beencontinuously raking up the chiche that minorities are not safe under Modi.

But the fact of the matter is that in a nation where PM Modi’s development agenda ‘Sabka Saath, Sabka Vikas’ (Together with all, Development for all) sans partisan politics, these forces don’t want this to happen because it is badly hurting their constituency. The manufactured intolerance is directly linked to the saffron surge – Modi’s rise to power, growing influence of the BJP and the rising acceptability of the RSS.

It could be recalled that most of the secular fundamentalists who are running this blatant disinformation campaign called ‘Intolerance’ were canvassing against Narendra Modi in the run up to the 2014 general election. More importantly, the campaign’s new brand ambassador Aamir Khan has a long hatred for Modi. In 2005 it was Aamir Khan who led a protest against then Prime Minister Manmohan Singh who defended then Gujarat Chief Minister Narendra Modi against the US’s intentions to deny visa to a democratically elected Indian representative. In the same year, Aamir had termed Modi a “murderer” during his interview with Shekhar Gupta in ND TV’s ‘Walk the Talk’ show.

Lies have been the hallmark of this anti-Modi brigade. Aptly says Prof Rakesh Sinha, Director of India Policy Foundation, “The dirt in the Indian Ocean must be less than the abuses Narendra Modi got from the secular forces.” The intolerance propaganda, peddled by a fraud gang of secularists, has a clear communal agenda to vitiate the atmosphere of the country. The nation must be aware of their sinister design.

At a time when India’s growth trajectory is picking up fast under Narendra Modi’s leadership, the secular jhoolawalas are running a well-orchestrated campaign against the Prime Minister, by spreading canards which ultimately aims at defaming India. The campaign will go down in history as ‘Hate India Campaign’.