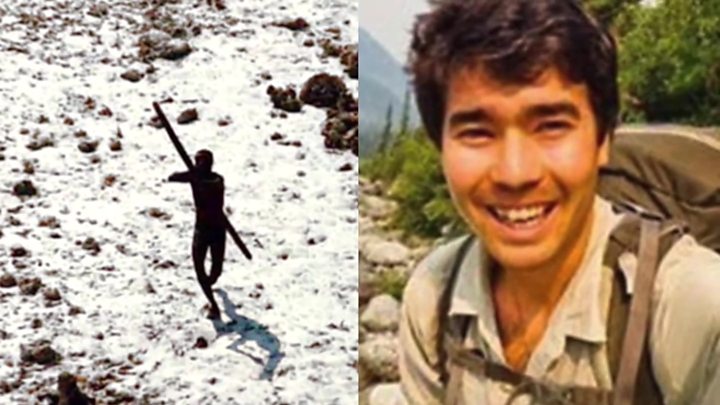 According to the World’s latest Christian martyr, the American missionary John Allen Chau, the North Sentinel Island is the “Satan’s last stronghold”. I can already foresee the late Chau manifesting as the Saint of Andaman and Nicobar Islands some years into the future. Here, we see the horrible black drama against a white background. It is one god’s attempt to exterminate all other gods, and Chau is his latest martyr who died in the holy fight.

Chau’s monotheist god has in the meantime exterminated countless gods and goddesses all over the globe and has the most number of believers among the species. But the god is still not satisfied according to the scriptural instructions given to the believers. The monotheist god needs to exterminate the whole Hindu pantheon and its believers, until he is the last chap standing in the world, before the Second Coming will be pronounced to have arrived by those lucky monotheists who made it to heaven.

Being the only remaining land of polytheists on earth, Chau is correct in presuming that the monotheist god’s antagonist lives in India. To make such a statement, however, I assume the late Chau had some relief and a satisfactory reason to suspect that the Satan has been or would soon be evicted from the rest of India once the last bastions of polytheism have been flattened. Perhaps, Chau knew that when polytheist traditions fall one by one, the Satan he knew also left the world, such as when women of fertile age violated the privacy of men and stepped on the pagan spiritual summit. I may also be wrong because Chau might have figured it out, correctly or incorrectly, that there are no original pagans left on the Indian subcontinent, save the North Sentinel Island. Or, it may be that pagans in jeans and T-shirts don’t matter anymore to the missionaries and their minders, the missiologists.

The modus operandi is the same everywhere for the bloodthirsty monotheist brigade: encroach the sacred space of the pagan everywhere, like in West Asia, Europe, the Americas, Africa, and Australia. The appropriation of religious spaces of the American Indians by the US government for myriad purposes continues even today. This practice is analogous to the appropriation of sacred space of the polytheists in India, particularly in Kerala. Nobody in India or Kerala noticed that as the monotheists and “activists” (another name for Communists) were desecrating Sabarimala, the sacred space of the Kani (Kanikkar) tribe in South Kerala, Agasthyarkoodam, was being thrown open by the Kerala government to tourists for trekking. Like in Sabarimala, the Kani tribe who were the original dwellers of this forest area had restrictions on women of menstruating age in ascending the Agasthyarkoodam peak and their women still observe this ancient tradition. They believe sage Agasthya, their spiritual guardian, is performing penance at its peak. The pilgrim season at Agasthyarkoodam starts coincidentally on the day the Sabarimala closes and lasts till Sivaratri rituals in early March. The Kani tribe and their ancient tradition evidently mean little to the government, since it is discouraging traditional pilgrims by introducing a trekking pass at a price of Rupees 1000. Even the Sangh Parivar, the supposed guardians of polytheist traditions, seems to have missed this attack on pagan tradition.

The gruelling war of the monotheist god on the pantheon of pagan gods provides spectacular imagery in the Paradise Lost by John Milton. The war of the monotheist believers on believers of other gods and goddesses in broad daylight has been equally awesome and destructive. We know how whole populations along with their cultures were wiped out in Europe and the Americas by the monotheist believers. The ferocity of the missionaries fuelled by the scriptural injunctions thundered around the globe on foot and on waters with manic velocity, blood flowing all along in copious volumes. No man who knows these as a fact would condone the continued existence of such a diabolical army of believers and their lunatic enterprise called evangelisation or proselytization. Instead of this belligerent germ being eradicated by any sane government, the supposed union of the states of the earth, the United Nations, has granted special privilege to Vatican, the notorious entity that should have been prosecuted for historical crimes thousands of times over and over, by which it goes to every other nation and get seated as a privileged guest for no other reason than colluding with the fascist and mass murderer Benito Mussolini. Why does the world’s united body, the UN, patronise Vatican as a nation and grant so much privilege for free?

The majority of people in the world are monotheists and the polytheists are a religious minority. And the majority became a majority through utter violence and mayhem against the latter. Today there is an outward calm, an appearance of civility but there is no equality between monotheism and polytheism. Equality is not possible because a large number of people are working against polytheism day in and day out all over the earth. These people are loaded with resources, privileges and power and have a game plan in hand. They are organised and so well coordinated that their sectarian prejudice (Vatican’s undeserving position in the UN) appears like natural, objective truth. The white people behind the monotheistic enterprise look invisible, like evaporating fumes. For instance, there are lots of apologists for the White Christian’s culpability in spreading the monotheist nonsense around the globe who assume the pretext that Europeans have left Christianity and that churches are empty there and that Christianity has become a third world enterprise. It is true that the head count of Christians is overwhelming in the third world countries, but most people forget or just ignore that the missionary leaders as well as missiologists who conceive of the modern monotheist strategy consist exclusively of white people (see the Wikipedia list of pioneering Missiologists) who are still fired by Stone Age sentiments. Above all, the funds that roll the missionary machinery everywhere come from Europe and the US.

The missiologists are the new evangelist leaders that line up behind the third world foot soldiers and direct them against the pagans and others whom they think are the enemies of the monotheist god. They are the invisible strategists and the brain behind the war against the polytheists and the ethnic Indian tradition. It is the missiologists who guide and assign foot soldiers such as John Allen Chau for the proselytization task in a certain place. They are bent on destroying polytheist traditions and are in collusion with political parties in India.

An objective observer of the political scene in India, especially Kerala, can distinguish the anti-polytheist sentiment. The prejudice of the Communists in Kerala against polytheism is blatant. While they promote Christian and Islamic institutions and patronise their respective clergy at the expense of ordinary believers, they bend over backwards to destroy polytheist traditions. This lopsided dealing of elected Indian governments and the Supreme Court is not only taking India to the verge of violence and anarchy, but raises serious doubt about their motives. While violating the Sabarimala tradition by taking two atheist women to the summit in an ambulance in male costume, the Kerala Communist government was also creating a “women’s wall” purportedly for gender equality as a public relations measure. This was hailed as a historic victory for women and scored heavily only among far-away, monotheist bleeding hearts of Europe and the West. None of them knows nor cares that the Kerala economy is in shambles and the cost of the “women’s wall” came at the cost of public funds kept for the relief of women victims of violence. Not to mention, the government machinery was misused and poor women on government welfare threatened with cancellation of benefits if they didn’t participate!

The inter-religious conflict that we see everywhere in India is the reflection of the monotheist cultural aggression and its reactions. It is difficult to remember now that the majority of women in old Kerala followed matrilineal traditions and had equal or more rights than men. Matriarchy and polyandry fell on the wayside because they were against the monotheist patriarchy that was introduced here as Christianity and Islam took roots, but the excuse was once again “Brahmanical patriarchy,” a phrase coined recently to beat Hindu polytheists with, while destroying their culture and traditions. The patrilineal tradition of the Brahmans is of a completely different sort and can never be accused of misogyny unlike that of the Abrahamic monotheists, which is diabolical in all senses of the term.

Indians are at the crossroads now not knowing where their spiritual and cultural identity lies. What did the women activists achieve by scaling the Sabarimala summit? Which god did they see there? Was it the man-invoked brahmachari Ayyappa who offers moksha while they are alive? Or was it the misogynist god who created humans out of dust to torment their lives and then gift them heaven after death?

What are at stake here if you take the wrong turn in India are true multiculturalism, tolerance and emancipation of the human soul from greed. It is becoming clear as daylight that true liberty and peace for human beings can materialise only with a polytheistic approach and philosophy of religion. The pagan Hindu approach to religion and spirituality is the lone star in the horizon that can save humanity from the darkness of delusional monotheism and lead the ailing species back on track towards the light of reality, mental health and true knowledge of the spirit.