Is there a Gloriavale Commune in Southern Tamil Nadu? 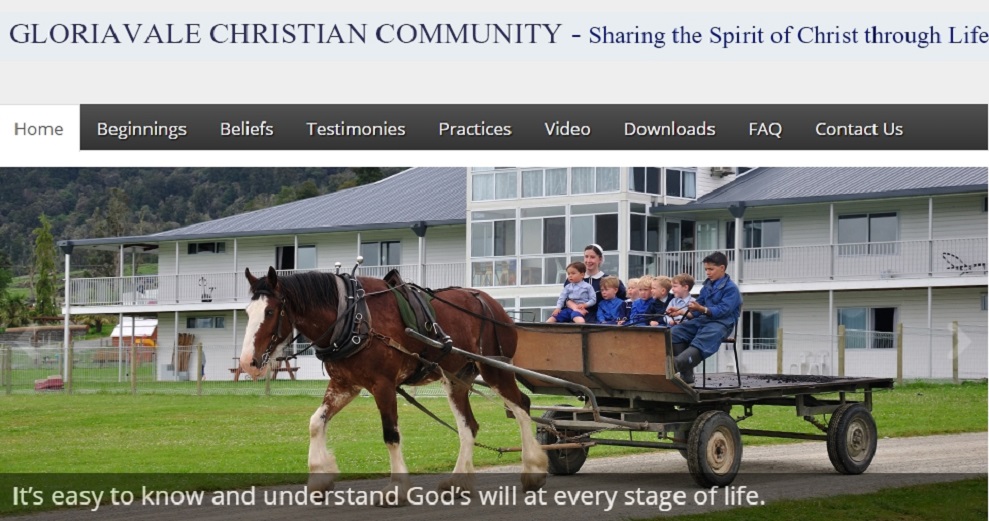 Gloriavale Christian Community (GCC) is a Christian commune in New Zealand which calls itself as a Church. Its members are supposed to live a life based on Biblical principles. Nearly 80 families live in a farm-like setting in Western New Zealand. Their website (also archive) mentions ‘that 35 babies are born a year, keeping the population young’.

GCC is headed by Neville Cooper. Of particular interest is the lifestyle it practices and the nature of education the children who grow up in its commune receive (website, archive). More details about it, its motto, practices can be found at its website . A rare video peek into the commune can be viewed here.

GCC has been in the news lately, that is, in May 2015. And, not for good reasons. Some of these news items can be found here, here and here, and make for pretty startling revelations. In short, there has been significant focus from the New Zealand mainstream media on this Cult for alleged abuses inside the commune. Some families are reported to be leaving the community, feeling disenchanted by its cloistered and regimented nature, coupled with social practices too far removed from those of a modern society.

A few lines from such stories caught our attention:

‘Seven Sharp (the TV programme) has confirmed that Gloriavale is starting a second branch in the Indian state of Tamil Nadu. Gloriavale leader, Neville Cooper, known in the community as Hopeful Christian,and other senior Gloriavale leaders have travelled to Tamil Nadu and have acquired a piece of land says Seven Sharp reporter Jehan Casinader.’ [Emphasis Added]

Or, more interestingly, this one:

So, this group from New Zealand brings Indian (likely Tamil) parents and children to NZ. They ‘return’ back to India (Tamil Nadu, going by the news reports) with New Zealand women from the commune.Which raises intriguing questions: what is the connection between New Zealand and Tamil Nadu? More importantly, where in Tamil Nadu? Did GCC actually purchase land in TN? If yes, how?

Such questions emanated from the watchful tweets by @vij_sri—for example this tweet which formed the basis for further research by the IndiaFacts team.

To begin with, like most Evangelical operations in India, Gloriavale Christian Community utilizes the FCRA route to send money to NGOs.

In particular, GCC has sent the following amounts to Dohnavur Fellowship (Reg. No. 076030011), Dohnavur, Thirunelveli district, Tamil Nadu, since 2007 (amounts in lakhs of INR):

Now, Dohnavur Fellowship is an Evangelical Organization founded by an Irish Missionary, Amy Carmichael in 1901. She lived there for close to fifty years. Her work is supposed to have included ‘rescuing’ Devadasis from Hindu temples. In 1905, she wrote a classic book entitled ‘Things as They Are: Mission Work in Southern India’ which can be accessed here. It provides not only a good summary on the Missionary modus operandi at the turn of that century, but also offers a peek into the lifestyle of the Hindu society back then.

Interestingly, GCC had sent these amounts to Dohnavur Fellowship for ‘orphan welfare’ and ‘towards agriculture’.

In 2011-12, GCC sent Rs.15 lakh to Smile Help Charitable Trust (Reg. No. 10260339), located ironically, in Temple Street, Vijayawada-520008. It is pertinent to note that GCC had not sent any money to any other NGO in Andhra Pradesh. It is also pertinent to note the following extract from GCC (website, archive)

‘Contact with Indian Christians in the state of Andrah Pradesh led us to support and extend a Christian school near Hanuman Junction, and later to buy land in the southern state of Tamil Nadu.

We are working there now with a congregation of dedicated Indian Christians to build a community according to the same Biblical principlesthat we have in New Zealand. As we began in New Zealand, so it is now in India.’

Note: Hanuman Junction is a famous road junction near Vijayawada.

The IndiaFacts team tried to trace the reason why GCC sent this small sum to SHCT, Vijayawada.

More importantly, CCC did not receive any remittance from any other foreign or Indian (FCRA-registered) entity. This goes to show that CCC is an exclusive franchisee of GCC. Who owns CCC is not known in the public domain. Whether any New Zealand citizen is part of the Executive Committee of CCC is not known. FCRA does not, in routine circumstances, permit foreign citizens to be part of a FCRA-NGO’s Governing Board (see Q. 43 of this FAQ).

Interestingly, CCC’s FC6 returns mention that these remittances (amounting to a total of Rs. 2.95 Crore) were for the purposes of ‘Maintenance of Christian farm school community’. Furthermore, GCC (website, archive) mentions one of its addresses as: ‘Christian Church Community. Thiruviruthanpulli Post Office, Cheranmahadevi (via), Tirunelveli District, Tamil Nadu 627 414, INDIA’.

Our research also led us to discover a few factoids:

(1) Thiruviruthanpulli is about 20 km from Dohnavur

(3) By all accounts, the Cheranmahadevi region is one of the most beautiful parts of Tamil Nadu.

To recap what we have seen so far:

Typically, when a FCRA-NGO purchases land, it states the fact explicitly in its FC6 return. IndiaFacts had reported on the quantum of money spent by FCRA-NGOs for land purchase in our earlier series exposing evangelical funding via the FCRA route. However, CCC does not mention purchase of any land in its returns. This is worth pondering over.

Needless to say, we do not have evidence from Indian news sources to verify whether the Gloriavale Christian Community, New Zealand has established a commune near Cheranmahadevi, Thirunelveli district, although a very recent news article in New Zealand’s Sunday Star Times (3 May, 2015) mentions so.

Readers, who can provide evidence and/or can verify whether a GCC commune has indeed been established at Cheranmahadevi, can leave the information in the comments section of this report.