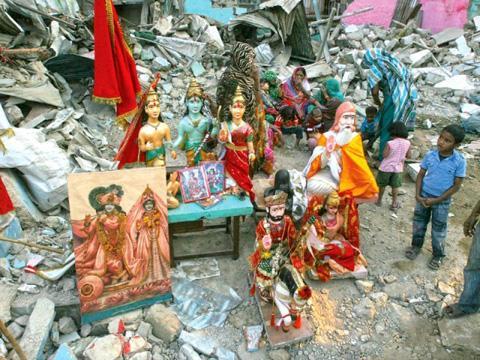 According to a report published in Dainik Jagran, Bajrang Dal activists were beaten by Muslim radicals in Chistia district of Hazaribagh. About eight people have been injured in this attack which occurred when Bajrang Dal workers were returning in a bus from a program while shouting slogans of ‘Jai Shri Ram’.

An incident of honour killing at the village Gundakanala in Muddebihal taluk in Vijayapura district of Karnataka has sent shock waves.  According to police, a 21-year-old pregnant Muslim woman, identified as Banu Begum, was allegedly burnt alive by her family members for marrying a Dalit youth Sayabanna Sharanappa Konnur from Valimiki caste.

A 58-year-old school teacher of Changjurai Ilashi Deuri Primary School near Jamunamukh in Nagaon district, Assam was raped and killed while on her way to school on 31 May.  At least three persons were involved in the crime and two arrests have been made thus far by Nagaon police – Moinul Hoque and Salimuddin.

A dispute that arose due to the mere splattering of water on the clothes of a village youth on the way to his afternoon namaz, took the shape of a communal confrontation in Nasirpur village of New Mandi police station, Muzaffarnagar district, on Monday. Stone pelting and firing were carried out, in which Brajpal and his son Aakash suffered injuries. In a critical condition, Aakash was referred to Meerut, but he passed away. His father Brajpal is in a critical condition.

The Purulia town in south-west West Bengal witnessed clash between two groups over social media posts that hurt religious sentiments. According to local residents, a few persons were injured in the violence. Rapid Action Force [RAF] has been deployed in the area.

“Tension started brewing about a couple of days back when a member of one community allegedly posted a comment on social media hurting the religious sentiments of the other community,” a resident of the area told The Hindu .

A WhatsApp message allegedly containing objectionable remarks against the prophet of Islam (Muhammad) became the cause of a attack on a Sikh family and vandalism of a Gurudwara in Rehad village, Bijnore district, UP. According to the Dainik Jagran report –

The WhatsApp message was received by Shanu, son of Ghulam Nabi, on Saturday evening. He informed other Muslims in the village about the alleged inflammatory message, and soon a large mob descended on the house of Swarn Singh, accusing his son of spreading the message. The mob vandalized the house and beat up family members – Swarn Singh, his brother Sukhdev Singh, neighbors Baldev Singh and Dalip Singh suffered injuries in the attack.

A Hindu girl, who married in South Gujarat town Vapi, filed a complaint against her Muslim husband and in-laws. According to complainant, her husband, father-in-law, mother-in-law and other relatives of Imaran used to force her not only to change her faith but also put pressure to eat meat and fish which she never had in entire life.

1. A Muslim man was arrested for assaulting two tribal women who objected to his slaughtering a cow in Assam

A Muslim man was arrested for assaulting and grievously injuring two tribal women who objected to his slaughtering a cow in Biswanath district of Assam. Police said a group of non-Muslims, including the two tribal women, came to Ali’s house and told him to stop slicing the animal. Enraged, Ali allegedly charged at the women with his machete and injured two women, identified as Bodheswari Goswami, 40, and Bhanti Mallick, 42.

However, in their minimal report of this brutal crime, Hindustan Times manages to peddle their anti-Hindu agenda, the HT article devotes just 205 words out of total 403 towards reporting the murderous attack on two women, and 198 words (almost 50%) are spent on talking about cow vigilantes, NDA, BJP etc.

2. Dalit man tied to a tree and beaten up

A Dalit was tied to a tree and beaten up in a village in Vijayapura by a fellow villager on the suspicion that the victim’s son had eloped with his daughter. Mareppa Harijan, a Dalit from Haligondakanal village of Sindgi taluk, in his complaint to the police, said Mehboobsab is the one who assaulted him.  Mehboobsab and his other son Allabaksha allegedly beat up Mareppa and when Ramesh, the second son of Mareppa, came to the rescue, he too was allegedly beaten up.

The Kerala High Court has declared the marriage of a woman as ‘null and void’ in a case that has seen the bride’s father claiming that his daughter was converted to Islam at the behest of the Islamic State.

Tension simmered in the coastal district of Dakshina Kannada in Karnataka as it witnessed stone pelting during the funeral procession of an RSS worker who was killed in a brutal attack by unidentified assailants on July 4. Sharath Madivala, an RSS worker and an owner of a laundry in BC Road, died at A J Hospital on Friday.

5. Vandalization of a temple at Hazaribagh, Jharkhand leads to communal tension in the area

An incident of temple vandalism and desecration has been reported from Banaso temple in Mahamaya complex of Vishnugarh block, in Hazaribagh, Jharkhand. The temple murti was also destroyed, and the area is tense with protesters demanding immediate arrest of the accused 5 Muslim youth.

6. My son was lynched by his Muslim friends: Mother of 14-year-old cries for justice

A mysterious case of the murder of a 14-year-old boy has surfaced in the national Capital, with his mother alleging that he was held hostage and lynched by some Muslim friends. The victim, identified as Yogesh Kumar, was found dead under mysterious circumstances near New Delhi Railway Station last month.

A Muslim mob attacked an upscale gated residential society Mahagun Moderne in Noida Sector 78 following rumors of a maid, Zohra Bibi, being held captive after she was caught stealing by her employers. The mob indulged in full-blown rioting with stone pelting and vandalism with rods on the society where over 2000 families live.

Seven tourists from Hyderabad and Delhi were roughed up and three of their women companions were allegedly molested by a group of cattle smugglers in the Rayagada district of Odisha on July 14. They were attacked after they reportedly protested the beating and torture of the animals by the traffickers. Of the seven tourists that included friends and their families, three were women. Three were from Hyderabad and four from Delhi and were on a sightseeing tour of Odisha.

A young man from Dalit community in Mewat (Nuh), Haryana, was punished by a joint panchayat for sharing a facebook post against the prophet of another religion. The man, named Daulatram, is from Prajapat community. He was punished with 11 shoe beatings in front of panchayat and fined Rs. 21,000. Also, he cannot enter his village Nagina for a period of 3 months as punishment.

The panchayat had a representation of members from all communities, though the entire Mewat district is a Muslim majority area. To keep the punishment ‘just’, an elderly member of the same Prajapat community was asked to beat Daulatram with a shoe 11 times, and the fine of Rs. 21,000 is said to be deposited in the temple where the same community goes to.

1. Minor Girl Raped by 2 Neighbours in Kairana, UP – One Accused (Zubair) Arrested

A 13-year-old girl was lured out of her house by a neighbour while her father was away working in the fields on 25th July. The neighbour along with his friend Zubair, son of Aziz, then dragged the girl into a nearby house and gang-raped her.

The girl’s father, resident of Thana Dehat near Kairana in West UP, got the case registered with police who raided the houses of the accused on Tuesday and arrested Zubair. The prime accused is absconding.

In a shocking incident from Puducherry (Pondicherry), 3 Muslim auto drivers out of a total of 15 suspects have been arrested for raping 4 minor girls. According to the report, which appeared in the Tamil daily “Dinamalar”, the 4 minor girls were raped by the 3 auto drivers and 12 others after locking them inside a house.

When the complaint was received by the department of women and child development, the 4 girls were rescued with the help of Odiyansalai police.

A Dalit girl who had gone to a sewing training center near her home on Friday was taken away by a Muslim youth Firoz (son of Siddique) and is untraceable ever since.

Police arrested two youth who tried to rape a mother and daughter duo who were on their way back home. The perpetrators had dragged the two into a park near Gayathripuram main road, but had fled the spot as locals came to the rescue of the victims.

The accused are Suhail (27) and Aqmal (25), both residents of Gayathripuram. It is said that a 40-year-old lady was returning home on Tuesday evening along with her 18-year-old daughter when the accused started following the two and passed lewd comments at them.

Several vehicles were charred and some shops targeted as clashes broke out between groups of two communities in the sensitive Mandvi area late on Thursday night.The rioting broke out near Mandvi crossroads during Ganapati procession.

News is trickling in of another brutal murder of an RSS functionary Vipin – this time it is not the Marxists, but Islamists who are suspected to be behind the murder.

Vipin, 30, a native of Tirur, was attacked near Pulinchode in Tirur around 7 am. He was rushed to the government hospital in Tirur where he was declared dead.