Nalanda University is ailing at childbirth 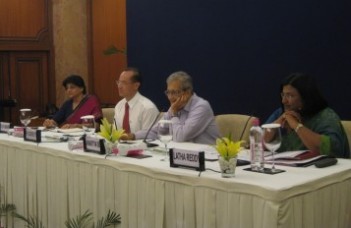 September 1 2014 was a day of pride for the people of India, and specifically the people of Bihar as the Nalanda University, once an ancient international centre for learning, finally started functioning eight centuries after it was looted and plundered by Bakhtiyar Khalji around 1193 CE.

The first session for the academic year 2014-15 started with courses in Historical Studies and Environment Studies. Although the university has officially started its session, the formal inauguration is scheduled to take place in the middle of September after a formal opening by External Affairs Minister Sushma Swaraj. So far, 15 students have been enrolled in the university and more are expected in the coming days.

But this moment pride should be followed by caution. If the original Nalanda was famed for being a storehouse of knowledge and erudition attracting scholars throughout the globe, the revived one has been mired in controversies since day one.

The Nalanda project was conceptualized as an international university involving many countries like Japan, Australia, and Vietnam.  The then UPA government financially backed a Nalanda mentor group which was set up in 2007 under the chairmanship of Nobel laureate Professor Amartya Sen. This group carried out meetings in Singapore, Tokyo, New York, Delhi and Gaya to conceptualize the establishment of the university. The Parliament enacted an Act to launch the project in 2010 which was approved by the President on 21 September and came into force on 25 November 2010.

Following its inception, this project faced controversy after controversy. Among numerous contentious incidents that marred this glorious project, the most notable ones are given below:

1.      The series of controversies began with the appointment of a ‘Vice Chancellor-designate’ of the new university even before the Parliamentary Act was notified for its establishment.

2.      The candidate selected for the position Gopa Sabharwal, was appointed through an order issued by a secretary in the MEA on the recommendation of the mentor group. Gopa Sabharwal was a reader in the department of sociology in the Lady Sri Ram College with limited knowledge about Nalanda. She did not meet the mandatory qualification set by the University Grants Commission (UGC) for the vice-chancellors of the central and state universities—that is, to be distinguished academicians with a minimum ten years of experience as a professor in a university system. Topping this peculiarity was Gopa Sabharwal’s monthly salary of Rs 5 lakhs which was more than double the salary of the Delhi University vice-chancellor.

3.      Ignoring the government’s recruitment rules that require public notice, Dr Sabharwal picked up her friend Dr Anjana Sharma, an associate professor in Delhi University, as the Officer-on-Special Duty (OSD) on deputation with a gross monthly salary of Rs 3.30 lakhs, which is more than the salary of a Vice-Chancellor of any national university.

5.      In its very first meeting, the mentor group nominated Upinder Singh, daughter of the then Prime Minister Manmohan Singh, and her colleague Ms Nayanjot Lahiri as advisers representing India in international platforms. Both nominees are not experts on any aspect of the Nalanda tradition or history.

6.      Even though on 25 August 2011, officials of the Ministry of External Affairs claimed that no vice-chancellor had been appointed to the Nalanda University, according to an RTI reply, vice chancellor Gopa Sabharwal and seven of her associates were drawing salaries since October 2010. Gopa as Vice-chancellor draws a salary of Rs 5, 06,513 per month.

7.      The first two faculties that were approved to be taught were environmental studies and historical studies, to be followed by others such as information technology and international relations. This is a direct contradiction of the original vision that was outlined to launch the Nalanda—as a premier centre of learning in Buddhism. The nations which agreed to cooperate with India to revive the Nalanda did so to connect with the country’s Buddhist heritage. More importantly, the ‘School of Information Technology’ has not been passed as the part of the Act whereas Buddhist Studies have been mentioned as the first one (Vide Clause 24).

8.      Since the project was approved by the Parliament, a huge part of the funding was contributed through taxing the common citizen as is the case with Central Universities. But strangely, the Planning Commission and Prime Minister’s Office decided to label Nalanda as an ‘International University’ to ward off financial regulations. However, the PMO did place the University in the ‘Central University’ domain to enable the release of funds stating:  “Both capital investment and operating budget of the Nalanda University will have to come mainly from the Government of India on the pattern of Central Universities.”

9.       During his tenure as the President of India, Dr. APJ Abdul Kalam proposed the idea of reviving Nalanda while addressing the Joint Session of the Bihar Vidhan Mandal on 28th March, 2006. He was then offered the position of the Visitor of the University. However, in a letter dated 4 July 2011 to the then External Affairs Minister S M Krishna, Dr. Kalam wrote:

This polite yet sharp letter displayed Dr. Kalam’s frustration with Amartya Sen and his protégé Dr. Gopa Sabharwal neither of whom could inspire the confidence of this scientist, himself a former academician.

10.  Regarding the project, the Parliamentary Standing Committee in their report for the financial year 2012-13 asked the Ministry of External Affairs to account for the ‘grossly inappropriate allocation of funds since Rs. 2009-10, which is not in consonance with the ground reality.’

11.  Strangely for a university located in Bihar, the mentor’s group wanted to have the project office and the department of international studies buildings in New Delhi.

12.  When pressed with tough questions by domestic and international press on the irregularities of the project, Dr. Sen blamed the local Bihari media of having a close-minded outlook.