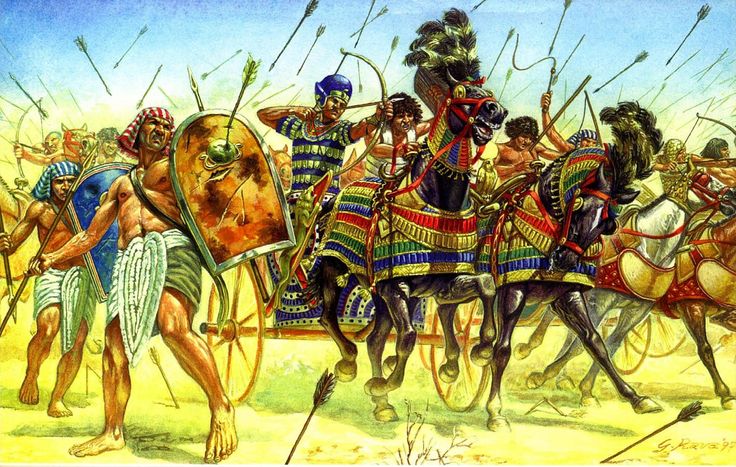 This essay is a meditation on the second chapter of Jan Assmann’s Of God and Gods, titled ‘Seth the Iconoclast: Polytheism and the Language of Violence.’ Polytheistic societies were not peaceful, tolerant or non-violent but the nature of their warfare, intolerance and violence was political and not religious. It was required for maintaining the political order.

We have noted in a previous blog that polytheism distinguished between justice and cult while monotheism merged them and projected justice itself as the true cult. Assmann claims – a point that is not fully clear to me – that monotheism marked a separation between religion and state while they remained indistinct under polytheism.

In the Egyptian case, the Pharaoh acted as god’s deputy on earth. Assuming a distinction between heaven and earth, the Pharaoh maintained order on earth, on behalf of the gods in heaven. The state thus assumes religious authority and its power becomes absolute. Monotheism challenged and overthrew precisely this absolutism by introducing a separation between religion and state:

Religion is now constituted as a sphere with its own normativity, which might even override the political normativity of the state.

Yet, this is only a theoretical case. In practice, Assmann says, the pagan indistinction between religion and state returned under monotheism and can be seen in forms such as Byzantine Caesero-papism, the Muslim caliphate, the status of the French king as head of the church of France, and so on:

Political violence executed in the name of God, with each of the warring parties claiming that God is on its side, has to be classified as sheer pagan violence.

I think his point is that these ‘warring parties’ are political enemies but they claim to fight each other for religious reasons, the chiefs on each side pretending to be God’s deputies in a manner similar to the Pharaoh. In the form of political theology, paganism survived in monotheism and monotheistic violence is therefore directed against paganism, typical the ‘pagan’ within, and not against political enemies.

All this sounds quite odd and appears, intentionally or not, as more of a defence of monotheism in principle, and furthermore, of a protestant monotheism. The confusion arises from Assmann’s failure to draw a connection between religion and state, on the one hand, and justice and cult, on the other. As discussed in the previous blog, his view is that in polytheism religion and state are united in the ruler, whereas in monotheism they are separate. Likewise, justice and cult are separate in polytheism and become united in monotheism. He ascribes this unity of religion and state in polytheism to the divine immanence invested in the ruler, of which the ruler becomes deprived under monotheism. Hence, he compares the Pharaoh to the Christian Church which, albeit monotheistic, invested itself with temporal and sacral authority. I read in this criticism of his, a protestant charge.

The use of the term ‘divine immanence’ reminds me of Eric Voegelin’s central message which warned against an immanentizing of the eschaton. The concern common to these thinkers appears to be that the state turns vicious when it adopts a religious identity and therefore a separation between state and religion is ideal. But it is proposed as a monotheistic ideal and hence while they may be critical of monotheism and its secularized forms – whether fascism or communism – they hold no sympathy for polytheism. Monotheism in practice may fall short of this ideal but it at least recognizes this condition as an ideal which in polytheism is not even an ideal.

This is typically how monotheism wages its battle against polytheism. It shames polytheism for its apparent lack of concern for justice. But when the injustices committed by the monotheists are pointed out, the violence is explained away as being of a political nature. Since polytheism is a false religion, its violence is always political in nature – it can never carry religious sanction. By ascribing the violence committed by monotheists to their politics, it is tantamount to saying – as Assmann does – that it is of a pagan nature and arises from the residual presence of paganism in monotheism. Ultimately, neither monotheism nor its God ever accept blame for anything. The religion will always be about peace and love, and its God always merciful and compassionate. Monotheism justifies itself in the face of the violence committed by its adherents by claiming that at least it aspires to peace and love, while polytheism accepts violence as a fact of worldly life. Monotheism thus gets away with any evil that it commits by pointing at polytheism as the greater evil.

However, in the first chapter of his book (discussed in the previous blog), Assmann considers polytheistic religion in the narrow sense of the cult and distinguishes it from justice. In my view, this itself should be read as a distinction between religion and state, where it is the specific function of the state to exercise justice. By combining these two, it is monotheism that destroys the boundary between religion and state. The fact that the Pharaoh exercised justice as deputy of the gods is irrelevant – as Assmann himself admits. The contents of the justice did not come from the gods but from the people – their customs and traditions. What the gods wanted was supplied to them in the form of cultic worship, which was a separate domain. The God of monotheism, on the other hand, wants justice to be done and also outlines its contents. It is in thus combining justice and cult that religion and state get merged.

The political violence committed by monotheism also arises from its own nature and should not be attributed to the residual presence of polytheism. The reason for Assmann suggesting monotheism as instituting a distinction between religion and state arises from his view that religion proposes its own normativity distinct from the political normativity of the state. What this means is that religion circumscribes a sphere where the laws of the state do not apply. But what is the nature of this sphere?

If religion says that the scope of the state laws does not extend within this sphere at all, then its nature must be considered political for it is as good as a state within a state. This is most evident in case of Islam which bears no pretensions about its political nature. Christianity is an ambiguous case with the famous dictum of rendering separately unto God and Ceaser. But even here we find that the early Christians modelled the Church on the ekklesia, the Athenian political assembly, and Jesus on the lines of the Roman Emperor, regarding him as son of God, a title adopted by Augustus, and his birth as evangelion ‘good news’ – a term which celebrated the ascension of Augustus. Monotheism is thus essentially a political doctrine pretending to be a religion. It is fundamentally the assertion that we will not live in accordance with the laws of a state but rather in accordance with the laws that have been revealed to us by God. Therefore, political theology is not a pagan corruption of monotheism – as Assmann appears to suggest – it is the very essence of monotheism itself.

Yet, this whole issue is complex because we are compelled to use the same term to refer to different phenomena in conflicting systems. Religion in the polytheistic system refers to justice and cult, in the broad sense, and only to cult, in the narrow sense. In the monotheistic context, religion refers to a cult of justice. The difficulty of understanding the religious, in its turn, gives rise to the difficulty of understanding the political, which is its conceptual complement. It is religion in the broad sense that Assmann considers when he compares religious violence in polytheistic and monotheistic systems.

This is exemplified by the violence inflicted on foreign peoples and their gods by the Assyrians in the name of their god Assur. However, the foreign gods which were destroyed were taken seriously as consecrated media of divine presence and destroyed because they were the protectors of the enemies. The tutelary deity of a conquered city was destroyed to bring the city under the domain of the conquerer’s god. However, a condition of general translatability existed between the gods of the different peoples. These gods are not considered an abomination and in worshipping them the enemy can be considered as following a similar kind religion and thus “integrated into one’s own political system without being forced to convert to a different construction of reality.”

This is typically found in polytheistic systems in the form of propitiary sacrifices of humans and animals, initiation rituals, and so on. The role of violence inflicted against oneself or a member of one’s community needs further study. Assmann has referred to the Nietzschen view of violence as a method of creating a memory. Monotheism condemns human sacrifice as an abomination and replaces it with other forms of atonement. The Akedah (Gen. 22) refers to the denial of Isaac’s sacrifice by God and its substitution by a ram. However, Assmann points out that while monotheism makes a big deal of its humanizing tendencies, they are not absent even in polytheistic systems and are part of a general change of thought which occurred in the Axial Age.

This is exemplified by the violence directed by monotheism against polytheism and arises from the impossibility of translating between the distinctive forms of religions. It is typical of the Hindus to confront the Christian threat by resorting to translation by regarding the church as a mandir, Jesus as an avatara, and so on, or by emphasizing the common messages of peace and love in the scriptures of the two religions. However, from the monotheistic perspective such translatability is impossible and the heretic or the pagan “are extrasystemic others who can be integrated only through conversion.”

This is exemplified by the iconoclasm of Pharaoh Akhenaton. He closed the Egyptian temples, smashed the cult-images, and erased the names of the gods, especially Amun. The biblical prophets denigrated the images worshipped by the Jews as mere pieces of wood and stone. This kind of violence is internal inasmuch as it is directed against one’s own people but it is extrasystemic because they are seen to be adherents of a foreign religion which is considered an abomination. In the contemporary world, the killing of Muslims by Islamists can also be regarded as a form of this violence. Since monotheism considers itself as an advancement over polytheism, the possibility of backsliding is seen as the most dangerous threat, even more so than polytheism itself. Those who live in the dark because they have never seen the light are bad enough, but those who have seen the light and yet continue to live in the dark – there is no forgiveness for them. Thus, the argument that Islam cannot be at the root of Islamic terrorism because more Muslims are killed by it than non-Muslims does not really hold water. This kind of violence, which is directed against insiders who are perceived as following a heretical system, is a feature of monotheism itself.

Ashay Naik is a Sanskrit scholar and a software professional. He is deeply interested in studying Bharatiya culture, political philosophy and theology. He has completed his Honours in Sanskrit from the University of Sydney and is a contributor to the Swadeshi Indology series. He is the author of Natural Enmity: Reflections on the Niti and Rasa of the Pancatantra. He blogs at https://satyanrtam.wordpress.com and tweets at @AshayNaik1.

A Theory of Polytheism