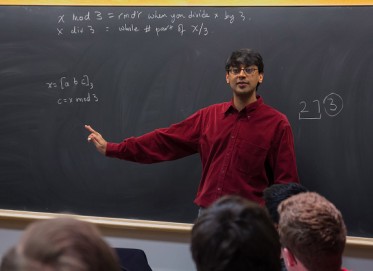 Mathematics and mathematical thinking have been an important aspect of Indian culture for a long time. From ancient philosophical verses like “Poornasya poornamaadaaya poornamevaavashishyate” (Infinity minus infinity can still be infinity) that reflect mathematical thinking, to the inherently mathematical structure of the alphabets and phonetics of Indian languages, to the discovery of zero and negative numbers, trigonometry, calculus, and more – so much mathematics has been discovered for ages in a way that is deeply intertwined in Indian culture.

Princeton University Professor Manjul Bhargava, is the first mathematician of Indian-origin to win the Fields Medal, the highest badge of honour in mathematics. Despite having grown up in Canada and the US he is well-versed in Hindi and Sanskrit and is very attached to his Indian roots. This makes him a suitable candidate to be branded as communal. Bhargava is not the only communal mathematician that India has produced. There was Ramanujan who saw his solutions in a dream when the Goddess Nammakkal rolled out her tongue.

However after Manjul Bhargava won the Field Medal, there were a large number of articles & debates in the Indian media asking why we don’t produce more of such mathematicians. Well the answer is one word: Secularism.

When many so-called intellectuals in the media decide to oppose the celebration of “Sanskrit Week in Schools by Central Board of Secondary Education”, rest assured that there is lot more behind the obvious. Opposing teaching of Sanskrit helps to stop the progress of Indians and India.  Some of you will ask how teaching Sanskrit will lead to learning.

In an interview to India Today, Professor Manjul Bhargava said, “Growing up, I had a chance to read some of the works of the great masters: linguists/poets such as Panini, Pingala, and Hemachandra, as well as the great mathematicians Aryabhata, Bhaskara, and of course Brahmagupta.  Their works contain incredible discoveries in mathematics, and were very inspirational to me. The classic works of Pingala, Hemachandra, and Brahmagupta have been particularly influential in my own work.” (http://indiatoday.intoday.in/story/fields-medal-winner-manjul-bhargava-interview-3-ancient-indian-mathematicians-his-inspiration/1/377773.html)

Ancient and medieval Indian mathematical works, all composed in Sanskrit, usually consisted of a section of sutras in which a set of rules or problems were stated with great economy in verse in order to aid memorization by a student. This was followed by a second section consisting of a prose commentary (sometimes multiple commentaries by different scholars) that gave a detailed explanation of the problem along with providing justification for the solution. In the prose section, the form (and therefore its memorization) was not considered so important in comparison to the ideas involved.

Bhāskara II‘s treatise on mathematics, written in 1150, known as Lilavati includes a number of methods of computing numbers such as multiplications, squares, and progressions, with examples using kings and elephants, objects which a common man could understand. Here is an example:

152:  There is a hole at the foot of a pillar nine hastas high, and a pet peacock standing on top of it.  Seeing a snake returning to the hole at a distance from the pillar equal to three times its height, the peacock descends upon it slantwise.  Say quickly, at how many hastas from the hole does the meeting of their two paths occur? (It is assumed here that the speed of the peacock and the snake are equal.)

Most of us can agree that the kids will find it more interesting to read and solve the puzzle of the snake and peacock.

Now every child does not have the option of getting introduced to the works of the great mathematicians of ancient India. So opposing the teaching of Sanskrit not only deprives Indians of the knowledge of their forefathers but also helps to divide the society in haves and have-nots in terms of language, knowledge and access to the same. Sadly the opposition to study Indian knowledge and knowledge systems is quite old.

“Ramchandra spent the decade prior to the 1850s in attempting to introduce calculus to Indian students, and in the process confronted serious pedagogic problems related to ethno-mathematics. Ramchandra, schooled in the algorithmic tradition of the schools of mathematics in India was equally at home with the mathematics ploddingly inscribed in British school curricula. He wrote a treatise in English, in the tradition of the textbooks of nineteenth century mathematics. However, the Treatise contained a new method and was to be a subject of much criticism rather than discussion on its novelty. Augustus De Morgan, then Professor at University of London, was the first arrived mathematician to see a copy of Ramchandra’ work-and till he received it, Ramchandra was the butt of ridicule by his countrymen, an exotic specimen for colonial administrators. De Morgan’s own interest in the work of Ramchandra arose from the fact that he was closely associated with the formulation of curricula for mathematics teaching in Britain; which involved devising methods for instructing British school students in elementary notions of complex algebra and the new discipline of calculus. Ramchandra’s teaching could, he felt, prove useful in the latter project in Britain. The book, De Morgan felt, could be introduced in British schools, though it was written for very different purposes viz. that of instructing students in India brought up on the theory of equations as encountered in the Bija-Ganita of Bhaskaracharya, into a relatively new branch of mathematics.” (The Structure of Scientific Exchanges in the Age of Colonialism by Dhruv Raina and S. Irfan Habib.)

The problem of converting ancient to modern is not a problem faced by India alone. Even Europe faced the same issues. But they came out of it successfully because they didn’t have secularists in the form of media and intellectuals. A contrast in Europe and India is given below:

1. “The greatest of Greek mathematicians, Archimedes (287-212 B.C.) made effective use of indivisibles in geometry, but considered the idea of infinity as without logical foundation. Likewise, Aristotle argued that, since a body must have form, it must be bounded, and therefore cannot be infinite. While accepting that there were two kinds of “potential” infinities—successive addition in arithmetic (infinitely large), and successive subdivision in geometry (infinitely small)—he nevertheless polemicised against geometers who held that a line segment is infinitely composed of many fixed infinitesimals, or indivisibles. This denial of the infinite constituted a real barrier to the development of classical Greek mathematics. By contrast, the Indian mathematicians had no such scruples and made great advances, which, via the Arabs, later entered Europe.” (Does Mathematics Reflect Reality?, Part Four: Order Out of Chaos, http://www.marxist.com/science-old/mathematicsreflectreality.html)

2. “Historians of science agree that Newton’s Latin was often unclear. All the formulas that are referred to as ‘Newton’s equations’ were introduced later by Euler, Daniel Bernouilli and other mathematicians. C. Truesdell wrote in 1968: ‘It is true that we, today, can easily read them into Newton’s words, but we do so by hindsight.’ David Park added in 1988: ‘It took a century before Newton’s work was made fully intelligible and others could do science without being a genius.’ Formulas could trigger a scientific revolution because they were easy to understand and soon became intelligible to large numbers of people all over the world. But that simple hypothesis seems to have drowned in a flood of historical, economical, sociological, and political explanations that rarely touch the heart of science, which is knowledge. India provides a telling contrast: infinite power series and the trigonometric functions of sine, cosine, and so forth were discovered by Madhava in the late fourteenth century, almost three centuries before they were discovered in Europe by Gregory, Newton, and Leibniz. In Europe, infinite series were a powerful ingredient of the scientific revolution. Indian mathematics was equally strong in this respect and strong enough in any case to have similar consequences. But it was formulated in a complex form of Sanskrit, more obscure than Newton’s Latin, and so nothing happened. (Artificial Languages: Asian Backgrounds or Influences? in IIAS News letter | #30 | March 2000)

Based on such facts,it will be correct to say that in India there can be no Bhargava without Sanskrit.