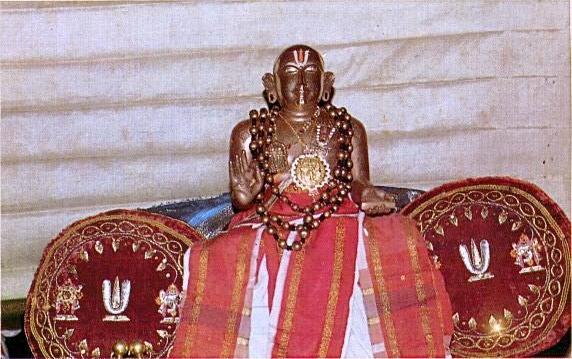 On this Shravana nakshatra of the month Bhadrapada, we celebrate the 750th birth anniversary of Sri Vedanta Desika, one of the foremost acharyas in the Srivaishnava Sampradaya and one of the greatest luminaries to have graced this land. Living a hundred and one years, he exemplified the spirit of Sharanagati (surrender unto the Divine), Jnana and Vairagya (detachment). The Indian tradition of smarana, of simultaneous remembrance and reflection, helps us, like the Hamsa, to draw the timeless essence from the contextual lives and actions of great beings. This piece is a humble attempt at grateful reflection on the life of Sri Vedanta Desika.

Sri Vedanta Desika was born in 1268 CE as Venkatanatha to Anantasuri and Totaramma of the Vishwamitra gotra fulfilling a divine prophecy that the temple bell of Lord Venkateshwara would incarnate as their son. Thus in the Srivaishnava sampradaya, Vedanta Desika is the Vani of Sriman Narayana, born to clearly proclaim the supreme path of Sharanagati or complete surrender.

As a precocious young child, Venkatanatha impressed the learned acharyas of Kanchi with his brilliance. At the age of seven, after upanayana, he began his formal studies under his uncle, the great acharya Atreya Ramanuja. By twenty, he had mastered the Vedas with all the six Vedangas and the 4000 Divya Prabhandas of the 12 Azhwars. As his allegorical passages in Sankalpasuryodaya tell us, he gained a knowledge of his school of Vedanta along with five other vaidika darshanas(schools) – Nyaya, Vaisheshika, Purva Mimamsa, Yoga and Sankhya. After completing his studies, he entered Grihastashrama by marrying Kanakavalli. The couple took up the rigorous life of Uncha Vritti, living by seeking bhiksha and not storing even grains beyond a single day. For 80 years, Swami Desikan lived this life of austerity.

Post marriage, his acharya initiated him into the Garuda Mantra and asked him to do tapasya to seek the grace of Garuda, who is considered to be Veda Swaroopa, the very embodiment of the Veda. Swami Desika left Kanchi for Tiruvaheendipuram, where he sat in tapasya for days meditating on the Garuda Mantra. He was blessed with a vision of Garuda, who initiated him into the mantra of Hayagriva, the horse-faced incarnation of Vishnu who presides over all knowledge, para and apara. Seen at one level, it is fascinating how the incarnate, living spirit of the Veda leads to the supreme brahman, Sriman Narayana. After tapasya on Hayagriva Mantra, Venkatanatha was blessed with a vision of Hayagriva, who gave him the amrita of jnana. Spontaneously, sublime poetry surged forth from Vedanta Desika’s tongue as the Hayagriva Stotra, his first work. In this stotra, he beseeches Hayagriva to enthrone himself on the tip of his tongue and inspire the flow of speech – jihvagra simhasanam abhyupeya.

A veritable Jnana Pravara (stream of jnana) flowed for the rest of his life. The sheer vastness of scope and the depth of insight that pervades Desika’s oeuvre of a hundred plus works, has to be glimpsed to be believed. He wrote across languages, in Sanskrit, Tamil, Prakrit and Manipravala. There are devotional works like the Garuda Dandaka, Rahasya Granthas (esoteric texts on Srivaishnava philosophy) like Rahasyatrayasaaram, Kavyas like Yadavadhbudaya, Gadhya poetry including Raghuveera Gadhyam , the allegorical drama Vedantasuryodaya on the journey of the atman towards moksha, vaada texts, texts on Nyaya, Mimamsa, Agamas, medicine, sculpture and even diet (Ahaaraniyamam). It is no wonder then that he was celebrated as Kavi Tarkika Kesari, the rare combination of being both a master aesthetician and dialectician. Being acknowledged as a Kavi was no small task – one had to have mastery over poetic meters, alamkaras and other demands. He is equally celebrated as a Tarkika, a person who excelled in Vaada. His Shatadushani is a Vaada text that details the 100 shortcomings in Shankara’s Advaita. What makes it utterly fascinating however, is that the entire text is in written in poetic metre!

The sheer brilliance of his work brought him fame and prominence. Madhava Vidyaranya, the acharya of Sringeri who mentored Harihara and Bukka to set up Vijayanagara, invited Vedanta Desika to adorn the Vijayanagara Sabha. There was also a personal equation to the invite as both were supposed to have been classmates. However, Vedanta Desika spurned the offer of kingly hospitality and all the wealth and fame that accompanied it, sending a five verse response, the Vairagya Panchakam. In a shloka he says,

No wealth did I get from my father, nor have I sought to earn any/
the only ‘thing’ my ancestors/ Brahma bequeathed is the treasure on top of Hastigiri, Varadaraja of Kanchipuram.

No wonder he was extolled as Jnana Vairagya Bhushana, the one adorned by ornaments of Jnana and Vairagya (dispassion).

His learning and erudition earned him the title of Sarvatantra Swatantra, the master of all arts and sciences, a claim that was constantly put to test in numerous ways. The challenges ranged from building a well with misshapen bricks to handling tantra prayogas to snake charmers who let their reptiles loose on him to a sculptor who challenged him to make a scale metal image of himself. In each of these he came out with flying colours. His erudition was recognised in both Kanchipuram and Srirangam and he became the Simhasanadipati(head of the lion-seat of learning) of both cities.

During his stay in Srirangam, he was challenged by a fellow Srivaishnava pandita to compose a thousand poems within the span of one night. Ever gracious, Desika, allowed his opponent to choose his topic first. When the rival pandita chose the feet of Sriman Narayana, Desika choose the Paduka( the slippers). At the break of dawn, Vedanta Desika had completed 1008 verses, which became known as Paduka Sahasram, while his rival had managed around 300 shlokas.

During Desika’s time, Srirangam, the heart of the Srivaishnava community, became the repeated target of Muhammadan invasions fuelled by the the dual quest of iconoclasm and wealth. The second invasion by Ulugh Khan in 1320 was considered to be one of the bloodiest. When the acharyas of Srirangam came to know of the impending invasion, they quickly planned and divided themselves into groups. One group under the leadership of Pillai Lokacharya left Srirangam with the Utsava Murthis while Desika stayed behind to build a wall to cover the huge, immovable Mulava Murthi. When the invasion reached the shores of Cauvery, it was merciless and barbaric, with the slaughter of over 12, 000 people in a single day. Desika managed to flee with the last remaining copy of Srutaprakashika, Sudarshanasuri’s great commentary on Sri Ramanuja’s magnum opus, the Sri Bhasya. He stayed for a while in Satyamangalam near Coimbatore and eventually made his way to Melkote. Finally, when word got around that the Vijayanagara empire under the leadership of Kumara Kampanna and his brahmin general Gopanarya had managed to free Srirangam, Desika finally returned to Srirangam to spend his years in writing and teaching.

In the year 1369, at the ripe age of 101, Desika decided to give up his physical body. Resting on his son and disciple Kumara Varadacharya’s lap, to the chanting of the upanishads and the Divya Prabhandha, Swami Desikan gave up his physical form. His legacy was continued by his shishyas including Kumara Varadacharya his own son, Brahmatantra Swantantra Swamy and Pradivadibhayangaram Anna.

The sheer panditya that he embodied and the austerity of his living illustrate the richness of the Bharatiya Jnana Parampara, that even 700 years ago, produced acharyas of the highest spiritual illumination, the widest breadth of knowledge and the highest quality of poetry and dialectics, all flowing from a spirit of loving surrender and service. Everything was a sacred pursuit done at the ahnika, the divine command of and finally offered as a samarpana unto Sriman Narayana.

Let us end with contemplating on Vedana Desika the way thousands of his followers do every day:

The peerless Venkatanatha, a lion among both poets and tarkikas,

A true acharya of vedanta, may he forever live in the shrine of our hearts