Shivaji And The Rebirth Of A Nation 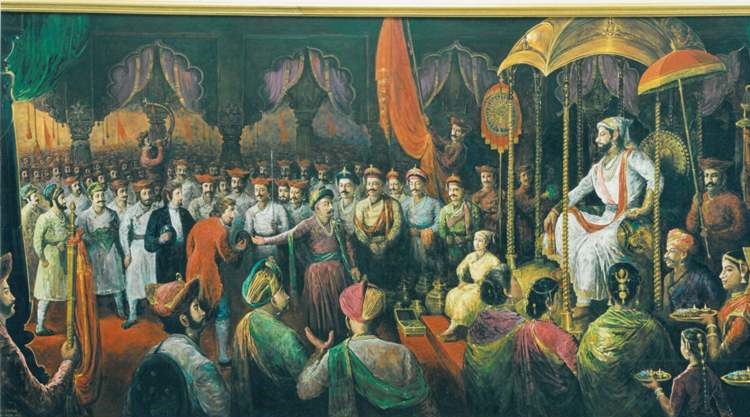 In her fiery speech in Parliament, Human Resources Development Minister Smriti Irani has focussed the nation’s collective attention on how the Congress and their leftist collaborators are responsible for teaching distorted history to school children. For instance, Shivaji, one of the greatest Indian rulers, is shown in a negative light. Irani quotes from a book for primary schoolchildren: “When we teach Shivaji versus Aurangzeb, we need to decide which Shivaji we take into the classroom.”

Clearly, the idea behind such words is to sow doubt in the minds of young Indians about a great Hindu emperor. It is targeted at killing the very idea that there was a Hindu revival in the 17th century which ultimately liberated India from Islamic rule. It was not the English but the Marathas who ended Muslim rule in India. But these facts are intolerable to the leftist/Congress/Muslim narrative in which Hindus are forever a defeated people.

For the leftists, communists and the Congress, facts must not stand in the way of their fictitious view of history. They have gone to the extent of poisoning the minds of generations of young Indians. As long as Hindus remain strangers to their own history, the leftists can remain happily ensconced in their well-paying sinecures in state-funded universities. They can continue to teach the same lies over and over again to coming generations in India and the wider world.

Appropriately, Irani’s speech comes barely a week after Shivaji Jayanti. It is time Indians realised Shivaji’s massive contribution to India. The great Maratha was a military genius who built an empire from scratch but it is for sparking a national revival that he should be remembered.

Shivaji, the Maratha emperor who established a modern and powerful Hindu kingdom in south-western India from 1642-1680, is undoubtedly the greatest Indian of the modern era. To understand Shivaji’s importance in Indian history, especially his role in rekindling the spirit of Indian nationhood, one must recognise that he built his empire against impossible odds.

India in the 17th century was hurtling towards catastrophe. Hindus, who comprised the vast majority of the country, were hopelessly divided, leading a disenfranchised and moribund existence under Muslim rule. The Mughal emperor Aurangzeb had launched jihad against Hindus by destroying their ancient and beloved temples and re-imposing the hated jaziya, a punitive and offensive tax which every Hindu had to pay or convert to Islam. Before him, his father Shah Jahan and grandfather Jehangir had banned the construction of Hindu temples, and destroyed many new ones.

The world was changing rapidly, with new discoveries and advances in sciences being made. While Europe was beginning to crawl out of poverty, plagues and fanatic Christian dogma, India was going in the reverse direction. Since the destruction of leading universities such as Nalanda by Muslim invaders, not one new university had been built. India’s intellectual landscape was barren because Hinduism was battling for survival. Furthermore, a new threat was emerging in the form of European nations like Portugal, France, Britain and Holland who, under the pretext of trade, were looking for opportunities to colonise India.

Other great liberators like Italy’s Garibaldi and America’s George Washington had two things in their favour—they had only a single enemy and their people were solidly behind them. Shivaji had to reckon with Aurangzeb’s mighty Mughal army, the smaller but powerful Bijapur sultanate, the Pathans, the fierce Abyssinians of Janjira on the west coast, the fanatic Catholic Portuguese and the cunning English. His own people, the Marathas, were serving as soldiers and chiefs in Muslim armies and totally lacked nationalistic spirit.

Birth of an Army

Shivaji got his inspiration from the Mahabharata saying, “One thousand horsemen of one mind are enough to conquer the whole world.” Barely 15 years old, he formed a tightly knit group of Mawala and Konkani boys and captured some forts of the Bijapur sultan. Maharashtrians now felt a patriotic obligation to serve Shivaji, although many still served the sultan.

The amazing thing is the Mawalas and Konkanis were physically much smaller than the Pathans, Mughals and the African Muslims, and yet they prevailed in battle after battle. Starting with guerrilla raids, soon the Marathas were engaging in pitched battles with Aurangzeb’s battle hardened Mughal and Rajput armies. Instead of fighting for jagirs and cash, the Marathas were now fighting for Hinduism, country and most importantly, honour. They defeated more powerful armies and also beat the Portuguese and the English on the high seas.

Shivaji was the first Indian ruler in the modern era to understand the importance of a strong navy. The Mughals and southern sultans had been utterly irresponsible by neglecting the coast, thereby ceding control of the seas to the Europeans. After he conquered the Konkan, Shivaji realised the importance to protecting coastal trade.

Though most Marathas were not natural seamen, the Kolis and Bhandaris of the west coast were good sailors besides being tough and well-built. Shivaji built hundreds of ships, large and small, in the creeks of Kalyan, Pen and Panvel. These fleets manned by Kolis, Bhandaris and some Muslims successfully battled the British, Portuguese, Dutch and Abyssinian fleets.

Historian Jadunath Sarkar writes, “Shivaji proved by his example that the Hindus can defeat enemies, conduct their own defence, maintain navies and ocean-trading fleets of their own, and conduct naval battles on equal terms with foreigners. He taught the modern Hindus to rise to the full stature of their own growth.”

Shivaji was farsighted in his dealings with the Europeans. More than any other ruler, he knew of their unfair trade practices, their propensity for taking and giving bribes, their religious fanaticism, and their dabbling in Indian politics with an eye on establishing European rule on Indian land. But realising that the bigger threat were the Mughals and southern Muslim kingdoms, he initially stayed away from confrontation. Also, the Europeans owned powerful cannons and matchlocks which would have been deadly if transferred to his enemies. So while he was in favour of meeting the Europeans as far west as possible, he knew the time to deal with them was after ending the land wars.

However, he meted out exemplary punishment when required. In June 1661, Shivaji’s soldiers plundered Rajapur and captured several Englishmen. This was payback for the English aid to Bijapur. The following year, he captured a band of Englishmen in Surat for supplying ammunition to his enemies. In Shivaji: The Founder of Maratha Swaraj, C.V. Vaidya quotes from an interesting letter from the president of the English factory at Surat to the disconsolate prisoners: “How you came to prison you know very well. This punishment is not for your defending company’s goods. It is for your going to the siege of Panhala and firing cannon under English banner. Anybody who is strong enough would have punished you in these circumstances. Merchants have no business to sell ball and power nor fire on enemies.”

The western powers were constantly fighting one another but they were shrewd enough to take advantage of India’s weaknesses. Shivaji played the same game against the Europeans and took advantage of the jealousies among these powers. He would, for instance, use cannons and ammunition from the Portuguese to attack the English, and take English help to fight the Dutch. Each of these nationalities would be overjoyed when Shivaji’s armies or fleets would defeat a rival European army or fleet. Often they would pay good money to Shivaji to fight the other. The one common thing in their relations with Shivaji was all of them paid hefty tribute to him.

Shivaji’s legacy is that he laid the foundations of a strong kingdom which ultimately under the later Maratha rulers re-established Hindu rule over most parts of India—from the Krishna in the south to the Indus in Punjab. The Marathas became the masters of Delhi and the Mughal emperor their protectee. Hindus were finally able to walk free in their own country after more than four centuries of almost ceaseless Islamic tyranny.

The most remarkable achievement of this soldier king was the completely non-feudatory nature of his empire. Shivaji’s was the first modern Indian state that had large numbers of soldiers, commanders and military strategists from Brahmin as well as lower castes such as Holkars and Mahars. For the first time in the modern era, jobs were not necessarily connected to one’s caste.

Even women, starting with Shivaji’s mother Jijabai, showed interest in administration. Muslims were treated equitably; his chief secretary being a Muslim. Shivaji, who was deeply influenced by the ancient Hindu epics, was keen on establishing an equal opportunity society. That it worked offers hope to those wanting to kickstart social engineering in India.

Shivaji died in 1680 of blood diarrhoea. When the news reached Aurangzeb, the emperor was elated but then the reality sunk in, and he muttered: “He was a great captain and the only one who has had the magnanimity to raise a new kingdom, while I have been endeavouring to destroy the ancient sovereignties of this country. My armies have been employed against him for 19 years and nevertheless his state has been increasing.”

Modern India’s pseudo-secularist and communist historians and political leadership have refused to accept Shivaji’s greatness. Believing that mentioning Shivaji’s name will offend Muslims, he is rarely acknowledged for his military genius, his administrative brilliance or his nation building efforts. In fact, Nehru and Gandhi both described the great Maratha as a misguided patriot. This is rich, coming from two men under whose watch India was partitioned.

But great men live in the hearts of ordinary people. It is a measure of Shivaji’s impact on the larger Hindu community that in Tamil Nadu – which has no dearth of great heroes – Shivaji is a popular name.

When Shivaji started with a few good men in the 1640s, perhaps only he could have imagined that just over a hundred years later, a mighty Maratha army would plant the Hindu flag on the walls of Attock in the Afghan heartland and liberate Punjab after 800 years of Muslim rule.