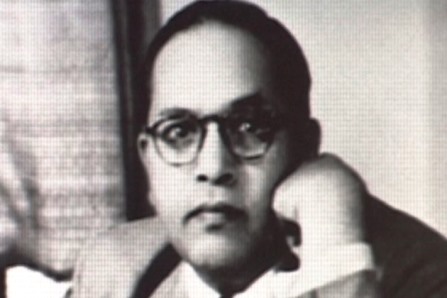 58 years ago, Dr. Babasaheb Ambedkar one of the most influential political thinkers of modern India left his mortal body and attained Mahaparinirvana. The country remembers gratefully, Dr. Ambedkar’s contribution for a host of reasons, the most important of which are his scholarly contributions to the framing of the country’s Constitution as the Chairman of the Drafting Committee and his phenomenal work in providing a strong ideological thrust to the backward castes movement in the country.

Dr. Ambedkar was a scholar par excellence. His writings, apart from revealing his critical reasoning and deep insight, are also shining examples that show that Babasaheb was an uncompromising nationalist. This uncompromising nationalism is the true legacy of Dr. Ambedkar. However, over the years, the communists not only hijacked the backward castes movement in the country but also fraudulently appropriated Dr. Ambedkar’s legacy.

Indian Leftists claim to have a pantheon of original thinkers on their side and generally accuse the right/nationalists of not producing any original thinkers. It dubs the nationalists as reactionary. However, the truth is that the thinkers that the Left brigade claims as its own have all been the products of this fraudulent appropriation. Be it Rabindranath Tagore or Swami Vivekananda, Sardar Patel or Dr. Ambedkar, the Leftists have at one point or the other, attempted to appropriate all of them. And, Dr. Ambedkar seems to have suffered the most at the hands of the Leftists and their fond bedfellows— the Islamic fundamentalists.

While in reality Dr. Ambedkar had passionately disliked Marxism and had explicitly held that Islam was inimical to Indian nationalism, the irony is that the Marxsist-Islamist combine is today projecting him as their poster boy only to sabotage the very nationalism that was so dear to him. This is clearly evident when one sees Dr. Ambedkar’s pictures featuring alongside that of the fanatical Muslim ruler Tipu Sultan’s in banners of Left-supported Dalit organizations, and in the ‘beef festivals’ in our universities organized jointly by self-proclaimed Ambedkarites and fundamentalist Islamists.

But what was Dr. Ambedkar’s stated position of Communism and Islam?

Sample a few portions from Dr. Ambedkar’s writings on Communism that our Marxsist intellectuals shy from quoting. Condemning the Communist philosophy of resorting to violent means for achieving its goals, Dr. Ambedkar stingingly reveals the values of life the Communists have destroyed in this pursuit (Emphases added):

Further, Dr. Ambedkar criticizes the Communist concept of the ‘dictatorship of the proletariat’:

At another point, Dr. Ambedkar illustrates why a Communist dictatorship cannot fulfill the all round development of man and society:

It has been claimed that the Communist Dictatorship in Russia has wonderful achievements to its credit. There can be no denial of it. That is why I say that a Russian Dictatorship would be good for all backward countries. But this his no argument for permanent Dictatorships. Humanity does not only want economic values, it also wants spiritual values to be retained. Permanent Dictatorship has paid no attention to spiritual values and does not seem to intend to. Carlyle called Political Economy a Pig Philosophy. Carlyle was of course wrong. For man needs material comforts. But the Communist Philosophy seems to be equally wrong for the aim of their philosophy seems to be fatten pigs as though men are no better than pigs. Man must grow materially as well as spiritually. Society has been aiming to lay a new foundation was summarized by the French Revolution in three words. Fraternity, Liberty and Equality. The French Revolution was welcomed because of this slogan. It failed to produce equality. We welcome the Russian Revolution because it aims to produce equality. But it cannot be too much emphasized that in producing equality society cannot afford to sacrifice fraternity or liberty. Equality will be of no value without fraternity or liberty. It seems that the three can coexist only if one follows the way of the Buddha. Communism can give one but not all.

However, it is the selfsame Communists who now appropriate Dr. Ambedkar as one of their own, who opposed the Constitution that he helped draft. Moreover, what were the grounds on which they opposed it? Let us hear it from Dr. Ambedkar himself, from his speech detailing the accomplishments of the Constituent Assembly:

And as we see, the last bit that Ambedkar cautioned against was put into practice by Jawaharlal Nehru and perpetuated more enthusiastically by his daughter. India continues to suffer the disastrous consequences for not heeding Ambedkar’s warning.

While this was Dr. Ambedkar’s stated position on Socialism and Communism, he had much harsher words for Islam. Today, most of the self-proclaimed Ambedkarites—who are nothing but committed Leftists in another avatar— have joined hands with Islamists to achieve their stated goal of building an egalitarian society. They say that unlike Hinduism, which according to them has an inherent system of class-hierarchy, Islam is a religion of equality and fraternity. And so, let us see what Dr. Ambedkar had to say about this supposed brotherhood and equality of Islam in his seminal work Thoughts on Pakistan:

Islam is a close corporation and the distinction that it makes between Muslims and non-Muslims is very real, very positive and very alienating distinction. The brotherhood of Islam is not the universal brotherhood of man. It is the brotherhood of the Muslims for Muslims only. There is fraternity but its benefit is confined to those within that corporation. For those who are outside the corporation, there is nothing but contempt and enmity.

The other accusation that the Leftists-Ambedkarites hurl at Hindus is that they are a stagnant group who do not make way for any progress. But if you ask them about Islam, as usual, they remain tight-lipped. However, Dr. Ambedkar was very vocal on this:

The existence of these evils among the Muslims is distressing enough. But far more distressing is the fact that there is no organized movement of social reform among the Musalmans of India on a scale sufficient to bring about their eradication. The Hindus have their social evils. But there is relieving feature about them- namely, that some of them are conscious of their existence and a few of them are actively agitating for their removal… It is noteworthy that the Muslims opposed the Child-Marriage Bill brought in the Central Assembly in 1930, whereby the age for marriage of a girl was raised to 14 and of a boy to 18 on the ground that it was opposed to the Muslim canon law. Not only did they oppose the bill at every stage but when it became law they started a campaign of Civil Disobedience against that Act.

And this is just a sample of what Dr. Ambedkar has written about Communism and Islam, but a revealing sample nevertheless. What is clear also is the fact that this has been a classic case of a fraudulent appropriation by the Leftists and the Islamists- they very people and ideas against which Ambedkar wrote and fought all his life.

On his 58th Mahaparinirvana day, it is only pertinent—in the larger interests of truth and intellectual honesty— to revisit Dr. Babasaheb Ambedkar and make an objective assessment of his work and the values that he stood for.

It is also equally pertinent to take back Dr. Ambedkar’s work and legacy from the Leftists, a task that is long-pending and overdue by several decades.