The Geographical Data in the Mahābhārata – 3 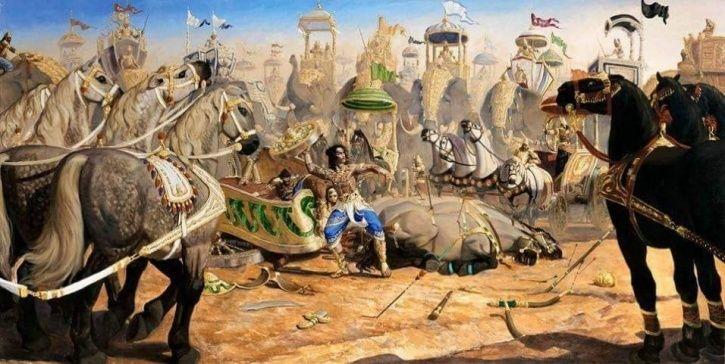 The Travel Narratives: The Emergence of Bhārata as a Union

Travel Narratives connects one place with another revealing the travel networks crisscrossing Bhāratavarsha. This shows how different parts of Bhāratavarsha are inter-related. The flux of the ancient people and their movements within Bhāratavarsha is revealed in these travel narratives, leading to a sense of Bhāratavarsha as a common cultural and geographical union. This was the precursor to the nationhood of Bhārata as we see today. Mahābhārata is thus the foundation of India’s nationhood.

The travel narratives in the Mahābhārata can be classified into journeys from one place to another, circuitous pilgrimages usually around Bhāratavarsha (Bhārata-Paryatana) and Military Travels (Digvijayas and troop movements as part of battles).

The following is a list of the major travel narratives in the Mahābhārata:-

Figure 22: Bhīma and Arjuna’s Digvijaya after their military education

Political Polarizations of Kurukshētra War, Reflecting in the Geography

The table below summariz the political polarization of kingdoms participated in the Kurukshētra War.

Figure 24: The polarization of Bhāratavarsha as kingdoms sided with the Pāndavas and Kauravas

The many Yādavā kingdoms, the Matsya kingdoms, the Rākshasa kingdoms and the kingdoms like the Kēkaya, Magadha, Kāśi, Kōsala, Chēdi, Aśmaka, Kānchi where polarized within as they fought the war on both the sides. The kingdom of Vidarbha ruled by Rukmi stayed away from the battle.

The paper was presented as part of the Mahābhārata Manthan International Conference Delhi – July 19th to 21st, 2017.

Jijith Nadumuri Ravi is the founder of the Website AncientVoice which contains 23500 pages on Mahabharata,Ramayana, the four Vedas and Vishnu Purana. It contains ancient India maps, analysis articles, lineage maps, the full text of English translation of these texts in Wikified form with 7000 plus nouns analysed creating huge information networks of Indic texts. The author additionally hosts websites like Naalanda, Takshasila and RecentVoice, focusing on Greek, Avestan and Tamil literature. He was a former ISRO scientist (2001-2006) and an artist who loves to paint events from Mahabharata.