Distorting the meaning of Swastika 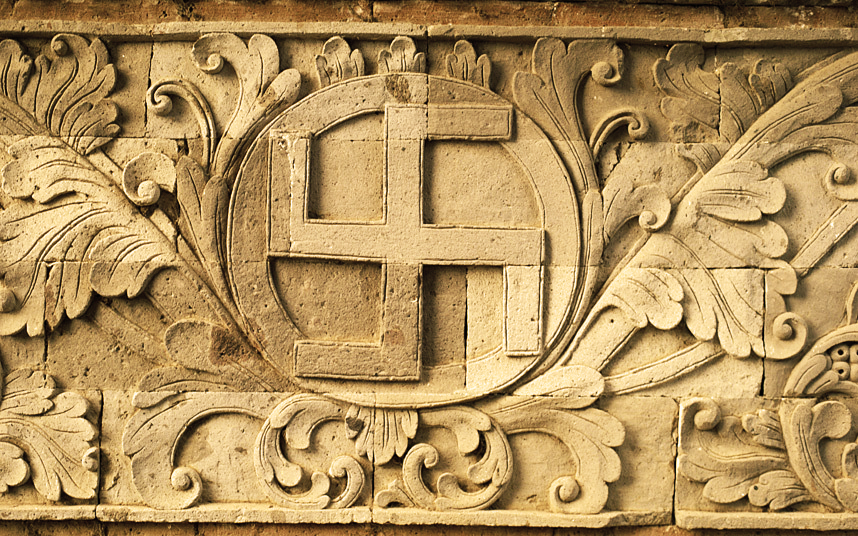 A student at the prestigious George Washington University (GWU) posted a swastika, which he acquired during his recent visit to India, in a residence hall. GWU president Steven Knapp has declared that since “its adoption nearly a century ago as the symbol of the Nazi Party, the swastika has acquired an intrinsically anti-Semitic meaning, and therefore the act of posting it in a university residence hall is utterly unacceptable.” GWU and the police are treating the incident as hate crime. It has been reported that GWU would permanently expel the student even though the student, himself Jewish, has clarified that his act wasn’t motivated by anti-Semitism. John Banzhaf, a law professor at GWU, has taken up the case of the student arguing that if the student suffers expulsion or any kind of discipline, “the effect will be to ban a sacred religious symbol from the George Washington campus.”

Koenraad Elst points out that swastika had been a fairly prevalent symbol of the pre-Christian Europe and remained pretty much in vogue even until the 20th century. British troops preparing to help Finland in the war of winter 1939-40 against Soviet aggression painted swastikas, then a common Finnish symbol, on their airplanes. It was also a symbol of Austrian and German völkisch subculture where it was associated with the celebration of the summer solstice. In 1919, the dentist Friedrich Krohn adopted it as the symbol of the DAP because it was understood as the symbol of the Nordic culture. Hitler adopted a variant of the DAP symbol and added the three color scheme of the Second Reich to rival the Communist hammer and sickle as a psychological weapon of propaganda (Elst, Koenraad: The Saffron Swastika, Volume 1, pp. 31-32).

Besides pre-Christian and Christian Europe, the swastika has been depicted across many ancient cultures over several millennia. Carl Sagan infers that it was inspired by the sightings of comets by the ancients. In India, it was marked on doorsteps as it was believed to bring good fortune. It was prevalent worldwide by the second millennium as Heinrich Schliemann, the discoverer of Troy, found. It was depicted in Buddhist caverns in Afghanistan. Jaina, who emphasize on avoidance of harm, have considered it a sign of benediction. The indigenous peoples of North America depicted it in their pottery, blankets, and beadwork. It was widely used in Hellenic Europe and Brazil. One also finds depictions of the swastika, turning both ways, from the seals of the Indus Valley Civilization (IVC) dating back to 2,500 BCE, as well as on coins in the 6th century BCE Greece (Sagan, Carl and Druyan, Ann: Comet, pp. 181-186). Hindus, Buddhists, and Jaina turned this universal cosmic imagery into a symbol of meditation and inner harmony, Chinese into an alphabet, whereas the Nazis misappropriated it as a symbol of hate.

It would be unreasonable to argue that the mere use of swastika by the Nazis permanently renders it an icon of anti-Semitism even though other cultures have used it without any hateful meaning for millennia. Georges Van Vrekhem points out that Hitler planned to build a dome of colossal scale, topped with an eagle. Standing in front of a model of the dome and pointing to the top, he declared, “To crown the greatest building in the world the eagle must stand above (it). (Vrekhem, Georges Van: Hitler & His God – The Background to the Hitler Phenomenon, p. 187.)” One would laugh at the suggestion that the eagle should be stigmatized as an anti-Semitic symbol merely because Hitler embraced it. Yet, such is the unreasonable yardstick that Knapp has used to unfairly stigmatize a Hindu, Buddhist, and Jaina religious symbol.

Besides the eagle and swastika, Nazis used another icon prominently: the Iron Cross, a variant of the Christian Cross and the Crucifix. The Iron Cross had been a German military insignia for many centuries and the Nazis merely adopted it. However, unlike the eagle or the swastika, the Cross and the Crucifix have always been symbols of anti-Semitism. They are constant reminders of the hateful libel that all generations of Jews are guilty of crucifying Jesus although there is little evidence that Jesus existed and his alleged crucifixion could well be a ‘cruci-fiction.’

Norman Beck, a distinguished academic and Lutheran theologian, demonstrates that the New Testament contains over 450 anti-Semitic remarks — thus making it the most comprehensive hate-filled anti-Semitic scripture in the world. Church leaders have always reinforced this message of anti-Semitism. Martin Luther, the so called Protestant reformer, wrote: “We are at fault in not slaying them (the Jews). … Firstly, their synagogues should be set on fire. … Secondly, their homes should likewise be broken down and destroyed. … Thirdly, they should be deprived of their prayer-books and Talmuds. … Fourthly, their rabbis must be forbidden under threat of death to teach any more … Fifthly, passport and traveling privileges should be absolutely forbidden to the Jews. … To sum up, dear princes and nobles who have Jews in your domains, if this advice of mine does not suit you, then find a better one so that you and we may all be free of this insufferable devilish burden — the Jews. (Martin Luther, Concerning the Jews and Their Lies, reprinted in Talmage, Disputation and Dialogue, pp.34-36.)”

The German Lutheran Church and its leaders such as Bishop Otto Dibelius, who later became the President of the World Council of Churches (1965),aptly called the Nazi policies toward the Jews “a fulfillment of Luther’s program.” The Nazis had reprinted Luther’s hate-filled anti-Semitic book. The editor of the 1936 Munich edition approvingly claimed that On the Jews and Their Lies was the “arsenal from which anti-Semitism had drawn its weapons.” The theologians of the German Lutheran Church who met in Darmstadt in 1948, three years after the Holocaust, proclaimed that the Holocaust was a divine punishment and called upon the Jews to halt their rejection and ongoing crucifixion of Christ (Rubenstein, Richard L. and Roth, John K.: Approaches to Auschwitz, the Holocaust and its Legacy, pp. 57-59.).

Elie Wiesel, the 1986 Nobel Peace Prize winner, while discussing the Holocaust, put it bluntly: “All the killers were Christians. The Nazi system was the consequence of a movement of ideas and followed a strict logic; it did not arise in a void but had its roots deep in a tradition that prophesied it, prepared for it, and brought it to maturity. That tradition was inseparable from the past of Christian, civilized Europe. (Abrahamson, Irving [ed.]: Against Silence, the Voice and Vision of Elie Wiesel, Vol. 1, p. 33)”

S.M. Vernon writes: “Christendom has no greater shame, no deeper sin, nor a better proof of low spiritual life and poverty of thought, than its hatred of the Jews (Vernon, S.M.: The Hated Jew, in Our Hope 4, August 1897, p. 59. Cf. Rausch, David A.: A Legacy of Hatred, Why Christians Must Not Forget the Holocaust, p. 40).”Richard Dawkins points out that Martin Luther and Hitler were inspired by the utterances of Jesus (Matthew 12:34) when they too called the Jews a “brood of vipers (Dawkins, Richard: The God Delusion (Kindle Locations 4398-4402).”

The Jewish predicament with the swastika is understandable given its association with the Nazis. However, it is important for the Jews to understand that the swastika had been associated with peace for millennia before the Nazis arrived and that the Nazis and the Holocaust were effectively products of Christian anti-Semitism. Hindus have always been hospitable toward the Jews.  It is immoral to stigmatize such a peaceful Hindu, Buddhist, and Jaina sacred symbol merely because the Nazis misappropriated and used it as an anti-Semitic icon. The swastika is an Indian religious icon that symbolizes hospitality – one that was denied to the Jews everywhere in Europe but was full-heartedly extended to them in India. It is a symbol of universal peace and prosperity.

It is not a symbol of hatred.