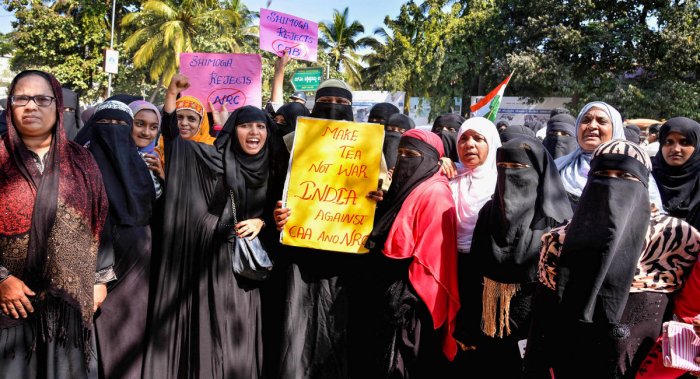 The Citizenship Amendment Act (CAA) has come into effect from January 10 with the Union Home Ministry issuing gazette notification. But the protest and cacophony against the CAA has reached an epidemic proportion, thanks to the propaganda, lies and disinformation campaign.

Those opposing the new citizenship law argue that the Modi government “wants to divide Indians” by making “faith a basis of citizenship”. The anti-CAA lobby state that the act is in “violation of the basic principles of Indian Constitution”. “The CAA is against the secular fabric of the nation, and an assault on the fundamental principles of Indian democracy,” they say.

Even as those who have hit the streets against the CAA don’t even understand what it actually means, their intellectual masters are busy peddling canards and fanning confusions, while some political parties are fuelling the unrest by cultivating the situation in a desperate bid to revive their fading fortunes.

It is therefore necessary to put the record straight and dismantle the disinformation campaign surrounding the new citizenship law.

Citizenship Amendment Act, 2019, provides a path to Indian citizenship for the six religious minorities in Pakistan, Bangladesh and Afghanistan – namely Hindus, Sikhs, Buddhists, Jains, Parsis, and Christians – who are compelled to seek shelter in India due to religious persecution or fear of such persecution in the neighbouring countries. The cut-off date is December 31, 2014, which means those who had entered India on or before that date are eligible for Indian citizenship.

But, why there was a need to bring in such a legislation? India was divided on religious lines in 1947 and Pakistan was formed as an Islamic country. In 1950, India and Pakistan had signed Nehru- Liaquat Pact, which seeks to guarantee “the rights of religious minorities” in both the countries. While secular India has always stood by its commitment to protect its minorities, Pakistan has never bothered to keep the spirit of the pact.

In 1971, East Pakistan was carved out as Bangladesh. After the assassination of Bangabandhu Sheikh Mujibur Rehman, in 1975, the religious minorities in Bangladesh had suffered a lot.

Similarly, during the Taliban rule in Afghanistan – from 1996 to 2001 – Hindus, and other indic religions were singled out and brutalised by the state-sponsored oppression.

Having faced persecution, these beleaguered religious minorities – of the three neighbouring countries – were forced to migrate to India time to time in search of a new home. Plenty of records and documentation exist to corroborate the fact. The Citizenship Amendment Act is a humanitarian measure which aims at addressing the concerns of these persecuted minorities.

Article 11 of the Indian Constitution gives the power to the Parliament of India for making any provision with respect to the acquisition of citizenship, for foreign nationals, on the basis of a law. The Citizenship Amendment Act, 2019, which was passed in both the Houses of the Parliament, didn’t even require a constitutional amendment.

India has a long history of hosting the victims of persecution. Centuries before we had a Constitution, persecuted Jews and Parsis had made India their mother land. The country had opened its arms to the migrated Tibetians and Tamils and had granted them citizenship. Similarly, India had accorded citizenship to the persecuted Hindus who came from Uganda.

The CAA must be read into a context and should be looked at in a dispassionate and impartial manner. It is a means to grant citizenship to the beleaguered religious minorities – from Pakistan, Bangladesh and Afganistan – who have suffered discrimination and persecution on religious lines. The CAA is religiously neutral as far as the minority status of these communities in the neighbouring countries is concerned.

But those who are opposing the CAA claim that the legislation is a “violation” of Article 14, Article 21 and Article 25 of the Indian Constitution.

Article 14 provides for equality to citizens before the law or equal protection of laws to citizens within the territory of India. But the principle of equality is only guaranteed to Indian citizens and doesn’t extend to those who are not citizens of India. Hence this is not to dispute that the CAA, which extends citizenship to five persecuted religious minorities in the three neighbouring countries, is in no violation of the Article 14 of the Indian Constitution.

Similarly, the Article 25 of Indian Constitution implies freedom of religion, while Article 21 states that no person shall be deprived of his/ her life or personal liberty. But in no way the CAA is in violation of these articles.

The CAA, which enables citizenship to the persecuted religious minorities of India’s neighbourhood on humanitarian grounds, is not meant for revoking citizenship of any Indian.

The legislation, however, is still being branded as “discriminatory against the Muslims”. But the fact of the matter is that in no way the act touches the rights of any Indian, for that matter any Indian Muslim.

Further, those who are terming CAA as “communal” have gone to the extent of arguing that why such an act “excluded the majority Muslims” in the neighbouring countries.

The logic is very simple. First, all the three countries – Pakistan, Bangladesh and Afghanistan – endorse Islam as their state religion. Therefore, there is no chance that those following Islam face religious persecution in those Islamic republics.

Second, one must understand that they are the Muslims – from Islamic republics – who have grown up in an environment which is un-democratic and non-secular. They come from a tradition which is intolerant to other religious communities and therefore they must be distinguished from Indian Muslims. And it was that intolerant tradition which was responsible for the persecution of the religious minorities in those countries. Therefore, Indian can’t extend citizenship to those Muslims, from the neighbouring Islamic republics, who have in a way contributed for the persecution of the religious minorities in their respective countries. Opening doors to them will have a serious threat to India’s unity, diversity and harmony.

Being the largest democracy of the world, it is the natural duty and responsibility of India to stand up for the persecuted religious minorities from our neighbouring countries. By giving a constitutional dignity to the beleaguered religious minorities, from our neighbourhood, the Modi government has not only corrected a historical wrong but also demonstrated the dharma of the civilisational India that is Bharat.

But this hasn’t gone down well with the elements who are always opposed to the essence of what the Indian civilisation has stood for. These elements are indifferent to the plight of millions of beleaguered minorities from India’s neighbourhood and therefore they are opposed to justice for these victims of religious persecution.

So who are these anti-CAA lobbies? They belong to the Left block who are openly against the idea of a civilisational India. With the Communists, there is connivance of the Islamists who are busy selling their dreams of Islamic caliphate.

In a desperately bid to score political brownie points political parties like Congress, Mamata Banerjee’s Trinamool Congress and Arvind Kejriwal’s AAP – who have voted against the bill in the Parliament – are showing solidarity with the anti-CAA protests. These political parties are using misguided students and youths as fodder in their anti-CAA stir.

The very intent of the anti-CAA agitation is questionable. There is a sinister propaganda to misguide the common Indian Muslims through these protests.

In the disguise of exercising their democratic “right of peaceful protests”, the anti-CAA protesters are busy propagating violence and riots. The spiteful protests aim at spreading anarchy across the nation. The theme line of such protests are essentially anti-India.

The violent anti-CAA protesters are openly raising anti-India slogans and displaying anti-national posters. In the anti-CAA protests in Delhi’s Sahin Bagh ‘Hum lekar rahenge aazadi, Jinnah waali aazadi’ slogan was raised. Similarly, during the anti-CAA protests in Mumbai ‘Free Kashmir’ poster was waved. And in Bengaluru placard with ‘F**k Hindutva’ written on it, with a desecrated ‘Om’ symbol was surfaced. The list could go on.

Amidst the anti-CAA protests back home in India, senior Congress leader Mani Shankar Aiyar rushed to Pakistan and described the protests “a popular counter revolution”. While speaking at a conference at Lahore, Aiyar said, the CAA is “discriminatory to the Muslims” and Prime Minister Narendra Modi is “facing an ideological rebellion across the country”.

Coming back from Pakistan, Aiyar has joined the anti-CAA protest at Delhi’s Shaheen Bagh, on January 15, where he said, “Aap hi ne unko pradhan mantri banaya hai, aap hi unko singhasan se utar sakte ho (You have made him the Prime Minister, only you can dethrone him.” This has compounded Congress’s utter desperation.

So what has started as an anti-CAA, anti-Modi demonstrations – misinterpreting the constitutional rights and the concept of secularism – have now fully turned into the shape of anti-India protests.

But who is funding the anti-CAA protests? Though it is understood that some political parties have invested in the protests, intelligence sources have informed this writer that anti-India funding has also spurred into the violent anti-CAA protests.

Even as the intelligence agencies point to the involvement of Pakistan’s Inter Services Intelligence (ISI), a possible connection of cash-rich terror outfit Islamic State in Iraq and Syria (ISIS) can’t be ruled out, they say. ISI through its active sleeper cells in India is funding the protests, intelligence sources informed. Enough is enough. Time has come to draw a line. The state must curb the violent anti-CAA protests with an iron fist.