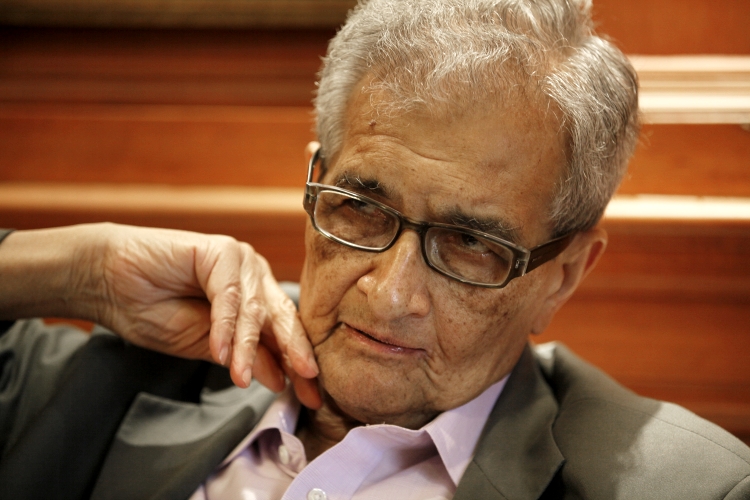 The former head of the Nalanda University, Amartya Sen writing in the New York Review makes wild and sweeping allegations against the Narendra Modi Government even as he conceals his own record of not showing accounts for the massive ₹2727 crores financial package allocated to it over a period of 12 years. Equally, Amartya Sen also has no response to widespread allegations against him of appointing favourites to various positions, even people who are unqualified to occupy the position of a Vice Chancellor.

At the outset, Amartya Sen’s New York Review article only betrays the deep prejudice that he holds in his very vision of Nalanda University. In the piece, he emphasizes more about the international nature of the new Nalanda Unviersity but not the real content of the knowledge systems—vidyaas—that were imparted at the ancient Nalanda.

It was that content of the traditional Indian knowledge systems, which was sought after by students from all countries in the world and thus Nalanda became an international site for excellence in higher education.

I may be called a revivalist, but I am not interested in another ‘international university’ nor should the Indian taxpayer be, Modi Government or no.

I am interested in reviving the classical learning of India, of its Sanskrit and Prakrit texts which provide the disciplines on which Indian civilization was built and which Nalanda served to propound.

Amartya Sen has his vision of international exchange much before he sought to make Nalanda a repository of Indian learning. There is no place for ancient learning in his conception of the present day Nalanda. As he claims in his article,

“The aim of the founders of the new Nalanda was not only to have a first-rate university but to encourage cooperation and interchange of ideas across national borders (again, reflecting the traditions of the ancient Nalanda). They endorsed a “vision” of a new university that would be “open to currents of thought and practice from around the globe…”

In which case, why is Sen using the name of Nalanda for this aim? There are dozens of universities in India which can do that including JNU which was founded for this purpose and which failed in this very aim because it disparaged classical learning.

If the taxpayer from India and other Asian lands has to recreate Nalanda, then that place needs to include classical learning. Were the fine European Universities not based on a revival of Greek and Roman classical thought? However, this very notion of Indian classical is either anathema to nearly all Indian policy makers or they are completely ignorant of the necessity of such a notion.

Indeed, the thought of including Indian learning at Nalanda University never was and will never be on the agenda of Amartya Sen. His long record shows that he belongs to the coterie that wilfully and strategically eliminated and denigrated every aspect of traditional knowledge in schools and universities.

We have witnessed this phenomenon in India since 1973 as a policy that began with the appointment of Nurul Hasan as the education minister by Prime Minister Indira Gandhi.

This unleashed a deliberate and systematic process as a result of which we do not find many scholars now who can read ancient Prakrits (not even classical Tamil) or even Sanskrit texts in relation to the areas of knowledge with any deep understanding (what was known as lakshya-lakshana sambandha).

Amartya Sen has made the same mistake which has been the bane of Indian education policymakers: of creating a modernity which is cut off from its past. When Amartya Sen was made the chief mentor by the Sonia Gandhi-controlled Government and when former Indian President Abdul Kalam, walked away from the project, the fate of Nalanda was sealed.

Given this background, Modi Government or no, the outcome of all that will emerge from Nalanda University will remain the same.

And now Amartya Sen is playing the victim now—the less said the better about his present theatrics. Also, this is not the place to give qualification details of sycophants appointed as heads of academic bodies and Vice Chancellors by Congress/Marxist governments in the last sixty years, forty years of which I have seen with my own eyes.

But now that Amartya Sen has set the ball rolling in the New York Review, similar material echoing the “injustice” done to him and supporting his fake victimhood is sure to appear in the media soon.

Of course, Amartya Sen is free to ridicule Lokesh Chandra by quoting Lokesh Chandra’s statement given in a political context and applying that statement to tar his credentials for being appointed as Chairman of ICCR. However, everybody in the academic and intellectual circles is aware of the phenomenal academic contribution of Lokesh Chandra (and his father Dr. Raghuvir) to classical learning and Buddhist studies, beginning from the days of penury when India emerged from colonial rule.

On the contrary, Amartya Sen converted Nalanda into a club that promotes a certain variant of a modern political agenda in the service of a political party. And so, now if a new, democratically-elected Government has shown him the door, why is he raising the bogey of academic victimization?

My concern in writing this, especially to scholars who are devoted to the real practice and discipline of studying of texts and vidyaas of India is to think about a simple, basic fact: can the modern Nalanda University have any connection with the ancient one unless it first dedicated itself to what they studied in ancient times?

It is time for us to speak up for classical learning at the new Nalanda University, and any Government that overlooks this or replaces it with another aim shall be abdicating its duty. Invoking the hoary Nalanda of the past to promote political ideologies is tantamount to invoking it in vain and doing it great disservice.