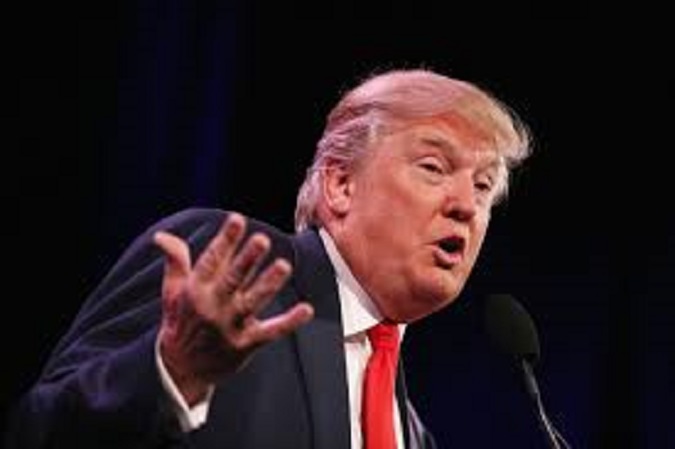 If you switched on the TV for the first time in ages last week, then you could be forgiven for thinking that America’s Donald Trump had declared World War 3 and millions are going to die soon. Checking CNN in the morning, afternoon, evening or night you would have seen a different angle on how to bash Trump for daring to say that Muslims shouldn’t enter America.

But that hasn’t stopped editors and liberals all over the world from absolutely frothing at the mouth at the very mention of his name. Trump is being attacked 24X7. Everyone wants a piece of the Bash Trump Pie. An e-petition to ban him from entering the UK got a record half-a-million signatures. Now their Parliament will at least have to discuss this.

Indian Shenaz Treasury clicked a picture of her posterior on social media and asked Trump to kiss her ***. A cartoon showed Trump beheading the Statue of Liberty and one person predictably called him Hitler. How many people did Hitler kill? 11 million died in concentration camps and Hitler kicked off World War 2 which saw 70 million deaths. How many people has Trump killed? Zero when last checked. How many laws has he implemented that will actually discriminate? Zero when last checked.

In fact if anyone can claim to have matched Hitler in terms of deaths in the twentieth century then it is Russia’s Josef Stalin and China’s Mao Zedong. But both are absolute darlings of the Left. Red intellectuals praise Mao and Stalin who killed millions and rubbish Trump over a single comment.

Bottom line: For these folks—mere words are more powerful than actual deeds. US President Barack Obama has been fiddling while West Asia was burning throughout his presidency. Iraq has been torn apart. Syria is seeing a catastrophic civil war. Both are plagued by the Islamic State.

Yemen is being bombed. There have been blasts in Lebanon and even Saudi Arabia. Iran’s nuclear status is wary despite the deal. But then Obama’s words are so so so good that you can forget all his bad deeds. Hell he even has a Nobel Peace Prize for talking all fancy!

George W Bush launched a meaningless Iraq War which cumulatively saw the loss of a million lives. He was hated and criticized, but the outrage he got absolutely pales that surrounding Trump for one remark.

You can kill a million and eventually it will be forgotten, but if you make a goofy proclamation then you will be absolutely plastered in the media and intellectual space in this Instant Age 24X7. (Especially if you happen to be from the Right)

Is it any surprise then that Trump’s stock among Republican voters has just soared? He is still leading the Republican race and most of his supporters seem to agree with him. Many must be feeling sympathy for him due to his intense persecution in the media.

The media’s job is to merely report the happenings of the globe but instead they live in a make-believe world and try to brainwash their viewers accordingly. The Left-leaning section that admires Stalin-Mao is even more delusional.

More importantly, it appears that the world has amnesia when it comes to such things happening in the past and pretending that all this so-called “hate” is just a new phenomenon. Such exclusions were possible once upon a time and were indeed carried out, though it would be extremely difficult to do such a thing today.

US President Chester Arthur signed the Chinese Exclusion Act in 1882 prohibiting the immigration of all Chinese labourers. (Few have even heard of his name)

President Franklin D Roosevelt ordered the forced relocation and incarceration of up to 120,000 people of Japanese origin as punishment for the Pearl Harbour attack of 1942. What did those poor innocent people ever do? That you were a US citizen didn’t mean much.

One recent analyst even called FDR a “Trump on steroids” but this aspect of his presidency is rarely brought up.

The Immigration and Nationality Act of 1952 could keep out even “suspected subversives” and those denied entry included legends like Gabriel García Márquez, Graham Greene, Michel Foucault and Pablo Neruda.

Coming to 2015, a whopping 30 odd US Governors said that they wouldn’t welcome Syrian refugees in their States. Unlike Trump, they happen to be in power. But even this is rhetoric for it is doubtful that they can actually implement such a thing.

As you can see Trump’s way of thinking is not isolated in America and moreover, his election campaign bombast could have been considered for legislation in the past but it is doubtful he’ll get anywhere in 2017 (when the next President takes over).

In fact, 17 Islamic countries already do not allow Israeli passport holders to enter their territory. Some reserve the right to reject visas to those citizens who even visit Israel. Any outrage here, then? What have the common Israeli citizens done who came to their current country after years of persecution elsewhere?

Coming back to trump’s presidential campaign, rival Hillary Clinton and Democrat laughed at Trump when he made that statement. She also laughed at Obama in 2008 and we all know how that turned out, so she’d better be careful!

Now there is talk of the Republicans going in for something called a “brokered convention” to keep Trump out should he emerge as the frontrunner at the end. The high and mighty of the world just don’t get it.

Decades back if you controlled a few newspapers and TV channels, then you could dictate the conversation. Not anymore. Today social media can have mainstream media for breakfast any time it wants to.

If Trump is popular among Republican voters and other leaders try to pull the rug from his feet, the brown stuff will hit the fan on Twitter and then spread elsewhere like wildfire.

Finally, as they say: There is no such thing as bad publicity.

All this 24X7 media coverage and attacks on Trump could well backfire.

Trump Haters could paradoxically end up making him even more powerful.