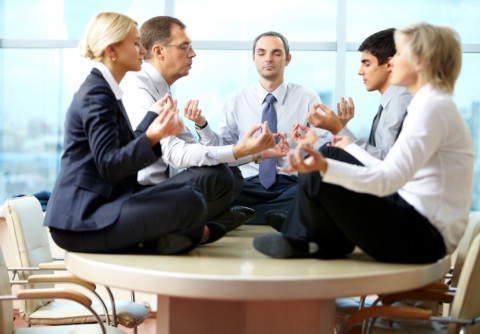 The title seems to be fitting for this piece from OZY which speaks of a growing trend among Silicon Valley executives getting ‘Yoga’ lessons to reduce their stress level. But if one goes through the article this trend seems to misrepresent Yoga.

This misrepresentation is not new because many in the United States have the tendency to view Yoga as some form of physical regimentation on par with pilates and gymnastics. Many promote the modern practice of yoga as a new American cultural phenomenon. Hence by no means will these promoters ever mention the dreaded ‘H’ word with relations to yoga. Over the years in America, almost all of the Sanskrit terms associated with Yoga have been ignored and replaced by English ones with different meanings. This alteration of the original terms and meanings is causing Yoga to lose its true essence.

Some may ask, ‘But why insist on using Sanskrit terms? Don’t we sing Christmas carols in many regional non-English languages?’

We do, but in any of those Christmas Carols does Jesus become ‘Jignesh’ or Bethlehem become ‘Bhopal?’ Or do any of those regional variations ignore the significance of Christ? The answer would be a no. The point is not about replacing Sanskrit but altering its true meaning.

Unfortunately this process of detaching Yoga from the sphere of Hindu Philosophy and then marketing it as some form of fitness tactic has been going on for very long, so much so that even the cultural references to Hindu traditions have been removed.

There are many Indians who fail to notice this mishandling and naively ask: ‘But what is wrong in delinking Yoga from Hinduism? Why not reap the benefits of this exercise instead of poking around the philosophical gobbledygook?’

Such is their ignorance that they don’t realize that Yoga is one of the primary branches of Hindu Philosophy not some fancy work-out routine. Will they support delineating the martial arts like Kung-Fu or Jujutsu from Chinese/Japanese traditions? In almost every training institute for these martial arts the trainers make an effort of giving out a general background about the relationship these arts have with their parent culture.

Although most American Yoga magazines and studios do acknowledge Yoga’s Indian roots, they still present it as an ancient physical exercise disembodied from Hindu spirituality and focus only on asana (posture).  In most Yoga studios, only the asana aspect of Yoga is highlighted, while its philosophical and spiritual linkages are mostly ignored.

The word Yoga is derived from ‘yuj’ which means ‘to unite’ in Sanskrit.  The term covers a wide array of practices, which range from physical and moral guidelines to contemplation on the Ultimate Reality. Yoga is a combination of both physical and spiritual exercises, with its ultimate goal being moksha, the attainment of liberation from worldly suffering.

One quick reading of the foundational text of Yoga, Patanjali’s Yoga Sutras, will affirm that asana (posture) is only one component of Yoga. Patanjali describes the goal of Yoga  as  “the cessation of mental fluctuations”, a core concept also expounded in Bhagavad Gita

Of course, one need not follow Hindu rituals in order to practice Yoga and the health benefits of Yoga like controlling blood pressure, relief of back pain and arthritis, and boosting of the immune system are there for all to experience.  Hinduism itself is a family of various traditions which would never compel practitioners of Yoga to profess commitment to the faith or convert.

But Yoga is not simply a physical exercise in the form of various asanas and is in fact an essential part of Hindu spirituality and the two cannot be delinked.It is both false and misleading to use the word Yoga in only describing exercises.