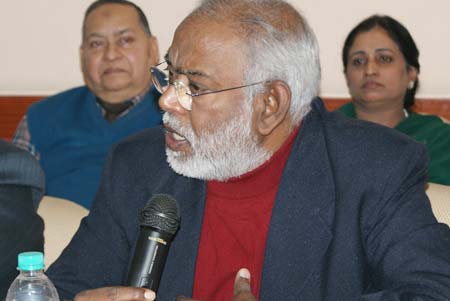 A leading Indian daily reported on 6 April, 2014 on a US Congressional panel’s hearing on religious freedom in India. The report titled “Row over timing of US panel’s Modi remarks” referred to the Tom Lantos Human Rights Commission (TLHRC)’s hearing titled “Plight of Religious Minorities in India” held on April 4th, 2014 in Washington D.C.

The purported objective of the hearing, as described by the Commission, was to “examine this [phenomenon of] polarisation in the context of the US-India relationship.” In a blatant attempt to interfere in the legitimate democratic process of another country, the Commission most unfortunately foments the impression that the Indian elections – one of the largest democratic exercise in the world – are being held in a “polarised” atmosphere where the religious minorities face discrimination. In a brazenly partisan attitude which points to the fact that India and especially the BJP-ruled states remain the target of  sizable external Christian missionary-connected or supported conglomerates, the  Commission interfering in India’s internal domestic affairs and law making institutions expressed its concern that the “Freedom of Religion Act” implemented “across five Indian States” has actually “exacerbated” “discrimination” and “intimidation” of minorities. In other words, the Commission, by generalising particular local issues and that too of quite a vintage, was essentially criticising the fact that this Act impeded the free activities of missionaries and the free flow of external funds within India for the purpose of “harvesting souls.” How or under which capacity does an external commission reserve the right to comment on India’s domestic laws and issues, is something that needs to be seriously debated.

The Commission’s following observation is also an open manifestation of that interventionist mindset which is being increasingly displayed by a certain section in the West,

In the months leading up to India’s 2014 national elections, there has been a rise in acts of violence targeting religious minorities and an increase in discriminatory rhetoric that has polarised national politics along religious and class lines.” These intervention-advocating sections are now unable to come to terms with the fact that India is at last on the threshold of a new era which shall see the emergence of a strong and determined leadership. They clearly feel unnerved at the fact that they shall eventually be in no position to dictate or tutor India’s external policies and shall have to reconcile themselves to the rise of India. “The report also states that the panel’s leading witness, USCIRF’s Katrina Swett, made “no secret of her concern over a Modi-led government coming to power” and that ‘many religious minority communities fear religious freedom will be jeopardised if BJP wins…

While we do not need to take lessons on how to conduct our elections nor accept certificates on our conduct, the fact that needs to be reiterated is that the Commission’s stance reeking of interference and an attempt to blemish India’s democratic record while trying to adversely influence the outcome of our national elections as well.

The other major issue of concern is the fact that the Commission listed Mr. John Dayal, “Member, National Integration Council, Government of India” as one of the witnesses, who shall “focus on the human rights situation for religious minorities in India” and “provide recommendations for U.S. foreign policy relation to India.”

It is common knowledge that Mr. John Dayal was also closely associated with the activities of the Sonia Gandhi-led National Advisory Council (NAC), especially in the body’s nefarious attempt at evolving a flawed and skewed Communal Violence Bill.

John Dayal has been a past master at misrepresenting India and especially Hindus and Hindu organisations on foreign soil. A look at some of his past antics in this respect only exposes the claims of this Government that it has done much to project India’s image abroad.

The fact that it has time and again harboured and patronised elements like John Dayal speaks of another plot. Let see how he has actually been involved in what can only be called the project of “breaking India.” In 2005 when the US Commission on Global Human Rights observed, on the testimony given by Kancha Ilaiah, another expert at denouncing India and Hindus on foreign soil, that “Converts to Christianity and Christian missionaries are particularly targeted, and violence against Christians often goes unpunished,” brother Dayal welcomed this criticism of India by a foreign agency as a “historic moment.”

As Rajiv Malhotra and Aravindan Neelakandan documented in their path-breaking study “Breaking India” when the US based advocacy group Policy Institute for Religion and State (PIFRAS) held a South Asia Conference, sponsored by “United Methodist Board of Church and Society and the National Council of Churches of Christ in the USA” John Dayal, as a participant, had contended that “minorities could not count on the Indian state to protect them, or to prosecute crimes committed against them.”  Dayal’s repeated use of foreign platforms to denounce the Indian system and polity is something which has been largely ignored by the mainstream media as well as the powers that be – i.e. the Sonia Gandhi led Congress and UPA whose patronage he has continuously received.

Keeping in mind the crucial phase in our national life as well as issues of national security and sovereignty, certain questions need to be answered by the Government, the Congress and its more vocal courtiers:

The fact is that the Congress, over the years, has patronized a sprawling intellectual mafia and mercenaries whose sole objective has been the denigration of Hindus. It did not matter to the Congress whether this mafia did it within the country or continued spewing the same venom abroad. India could be tarnished and it did not matter as long as in the process Hindus could be berated and demonised.

The John Dayal types belong to that intellectual underworld – supported, sponsored, nurtured and protected by the Congress and its hydra-headed system. The time has come for exposing and disbanding this insidious network.