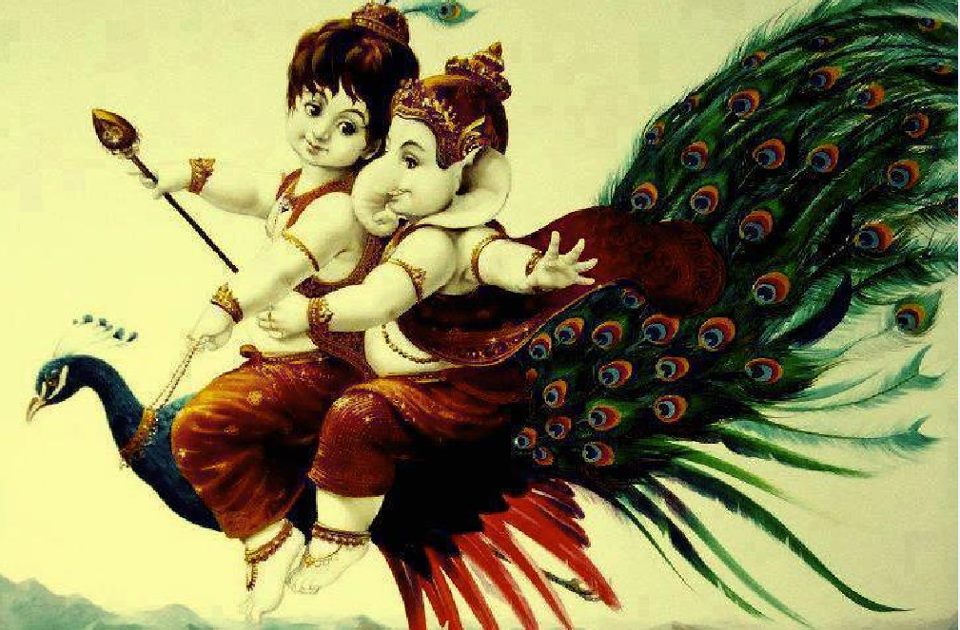 Dhārmic traditions rarely stipulate hard and fast rules which makes them the most natural and the most evolved of all traditions. This freedom is what paves the way to higher possibilities in life experiences. This said, there is one fixed rule to exercise this freedom: Exercising this freedom must not violate dharmā; in short, it must be responsibly exercised.

One of my childhood favourite stories is that of Gaṇeśa and Kārthikeya* vying for the divine mango. Below, I am providing different perspectives with which I have been able to interpret this beautiful story.

Once, Nāradā brought a mango to Śiva and Pārvati and said, “Dear Mother and Father, this mango is divine.” When Śiva was about to cut it to be shared, he interrupted, “No, this mango is to be had by only one person!” Śiva immediately gave it to Pārvati but she did not want to have anything without sharing it with Śiva. They now had to give it to either Gaṇeśa or to Kārthikeya*. Soon, a quarrel erupted between the two boys on who was more deserving of the mango. In order to settle the issue, Pārvati interrupted and set a contest for them, the winner of which would be the one to get the mango: The one to go around the world first would be declared the winner of the mango. And so, Murugan*, the strong and athletic one – who would lead the gods as their general in the war against Sūrapadman – mounted his peacock and set off.

The stout and clumsy Gaṇeśa glanced at his own vahana, the Mūṣika and knew that there was no way they could pull it off.

He requested his parents to sit down together, circumambulated them and prostrated to them.

He had won the mango! When Shanmukhā* returned, he was greatly enraged but yet, the mango was not his!

Velāyuda* walked away in a huff and would not return despite the entreaty of his parents. On the way, Avvayār, the great Śaivite poetess, who also happens to be the most ardent devotee of Gaṇeśa, met him. By the grace of Śiva and Pārvati, she knew the reason for Kumaran’s* anger. She tried to pacify Saravaṇā* in several ways but to no effect, more so because he knew that she possessed a soft heart for his elder brother, Gaṇeśa. Finally, she sang, “Thou art the fruit; The fruit of ultimate knowledge you embody; What other fruit are you seeking?” This stilled Senthil* into realizing his true self and immersing himself in meditation at the same spot.

He is still worshipped as Pazhanī* (Pazham + nee = thou art the fruit) right where his true self was brought to his cognition by Avvai.

When I was younger, I loved Gaṇeśa ‘winning the race’ because I was taken in by his simple humility to go around his parents while Subrahmaṇya* proudly mounted his peacock to encircle the universe. The moral idea of pride versus humility as absolute virtues was strong in me. The icing was the appeal of the parents, Śiva and Pārvati, being the entire universe in the eyes of a child. And what a sweet appeal that held for me!

As I grew a little older, I interpreted the story to mean that Śiva and Pārvati WERE the entire universe and, in recognizing them, Gaṇeśa was victorious over Murugan*, who was blind to this truth until it was too late.

A little into my early adulthood, I realised that Gaṇeśa was associated with gñana because of the direct approach to a problem while Murugan* took the more difficult path which, showing its inherent difficulty, with a possibility of failure, associated him with warfare.

I think of this story, among the earliest ones told to children, as one with a lot more to it than the above. And I am glad because it happens to still be one of my favourite stories! Here is my understanding at present –

Gaṇeśa, being Vigneśwara, had simply removed all hurdles and meditated single-mindedly (by circumambulating Śiva and Pārvati) to obtain Supreme Knowledge which was the fruit.

Mayilvāhanan* was outward bound. He was guided by his senses and went all around to conquer the world. At the end of it, despite him having fulfilled the condition set by his parents, he was unable to enjoy the fruit.

When Skanda* saw that Gaṇeśa had the mango, he was disappointed. He walked away, not wanting to be with either his parents or with Gaṇeśa. His desire to obtain the fruit of his action and the failure to have this fulfilled caused him to be disenchanted with Śiva and Pārvati, the source of Supreme Knowledge. He walked away, unmindful of his true Self.

Avvai was a Gaṇeśa bhakta. She would not hurry her pujai for Gaṇeśa even when Saint Sundarar and King Cheramān asked her to come along with them to Kailāsam and, instead, asked them to carry on while she completed her ritual as usual. Gaṇeśa was her iṣtadevata and she was Gaṇeśa’s favourite bhakta and he simply lifted her with his trunk and placed her in Kailāsam long before the other two arrived there!

Gaṇeśa caused Avvai to know the situation and got her to talk to Ārumugan*. When Avvai spoke to Bālaguru*, he was not in the frame of mind to listen to her and walked rigorously up a hillock wanting to put this old woman off-trail. She persisted in trying to make him understand. Then she sang, “Why do you seek the fruit when you yourself are the Divine Fruit of Knowledge?” This stilled Mayūravāhanan’s mind. He was reminded that no amount of external conquest or knowledge would amount to the great and assured knowledge that are possible by moving inward. He stood there, wearing his loin and holding his dandam, his forehead smeared with ashes and his eyes glistening with the awareness immersed in Śiva and Pārvati. He stands there as Palanī*, the young boy, who himself is the action and is also the ‘Fruit’ (Supreme Knowledge).

I am thrilled that this little story about a fight over a mango fruit is turning out to be a treasure chest for me. What else will unfold in time, I wonder…

*The many names of Kārthikeya