A Civilisational Slur: Hindumisia In The Story of Jaichand And Prithviraj Chauhan 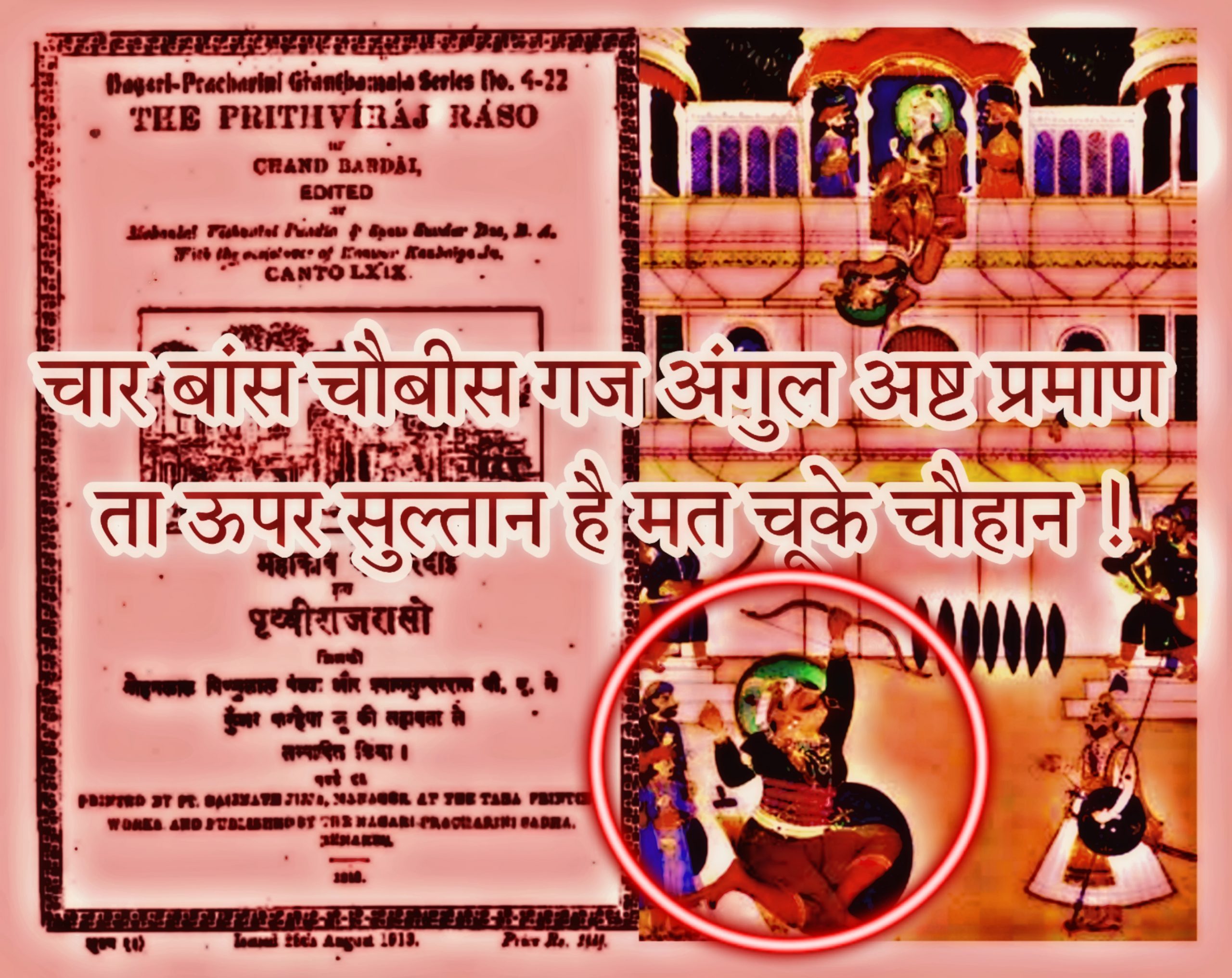 A member of parliament said it. The ruling party spokesperson also said it. News anchors have screamed it on television debates.

The J word. ‘Jaichand the traitor.’

First of all, Jaichand is a hacked-off version of Maharaja Jayachandra of the Gahadavala dynasty.

Since his death in the twelfth century, he has been called a traitor so many times that Jayachandra, aka Jaichand, has now become a synonym for betrayal.

How did this come to pass? Let us trace this trajectory of cultural amnesia.

We have come to believe, over many generations, that Maharaja Jayachandra of Kannauj, in the twelfth century, had aided Muhammad Ghori in attacking Prithviraj Chauhan of Ajmer.

And all this was done, we are told, out of hatred for Prithviraj Chauhan who allegedly abducted Maharaja Jayachandra’s daughter Samyogita and married her.

Prithviraj Chauhan defeated Ghori seventeen times, and after making the cardinal mistake of ‘forgiving’ Ghori, lost his eighteenth battle with him. Subsequently Prithviraj Chauhan was tortured and killed. Some also say that Samyogita met the terrible fate of taharrush[1] in the hands of an Islamic mob. This tragic end obviously aggravates the ‘Jaichand betrayal’ to epic proportions.

We have imbibed this betrayal story from our history books, in classrooms, in film and literature. Over decades, like an intravenous drip, without break in continuity. ‘Jaichand’ is now a dirty word hurled on television debates, in parliament, and by Twitter trolls.

Yet, incredibly, none of what is said about Jayachandra is true.

The historical truth is that Maharaja Jayachandra’s Gahadavala Dynasty had been fighting invaders for generations before him. ‘Aiding Ghori’ would have gone quite against the grain.

One of the descriptions used for Maharaja Jayachandra is ‘Yavanakshayakaro,’ i.e., the destroyer of ‘yavana’ — the foreigner. The Gahadvala Dynasty had also imposed the ‘Turushkadanda’ — a tax, as the name suggests, specifically for Turks.[2]

And that is not all, even Islamic sources chronicle Maharaja Jayachandra as a formidable opponent.[3]

Maharaja Jayachandra was a devout Hindu, inclined especially towards Vaishnavism. He constructed temples in Ayodhya and Varanasi, as also the last iteration of Lord Shri Rama’s Temple in Ayodhya.

Few people would know that it was Jayachandra’s Treta-Ka-Thakur inscription that was instrumental in bringing about a substantial change in the Ram Janmabhoomi Case. He was also a patron of several seminal works of Indian literature, like the Naishadhiya Charita of Sriharsha, which is commonly counted among the five great kavya-s of the Sanskrit canon. The Bhavishya Purana and the Prabandha Kosha call him the greatest ruler of Hindustan of his time.

In Chandwar, in spite of a pitched battle, he took an arrow in the eye. And then he walked his elephant into the river for jalasamadhi rather than surrender to the invader.[4]

It is highly improbable that a dharma rakshaka, protector of the faith, like Jayachandra or any devout Hindu would allow, let alone aid, a mleccha, or a yavanato invade what he died protecting.

Be that as it may, some historians speak of an enmity between Prithviraj Chauhan and Maharaja Jayachandra that prevented a battle alliance to confront Ghori.

Hence entry of the invader into the country.

Yet there is no historical evidence of any such enmity that would have prompted Maharaja Jayachandra to betray Prithviraj Chauhan, allying himself with the invading Ghori.

A samrat in his own right, Prithviraj Chauhan is also considered one of the greatest conquerors in the annals of our history. He did not really need any alliance to confront Ghori — especially a ruler like Maharaja Jayachandra who lay geographically east to his empire, and away from the direct onslaught of the invader.

The odds of Prithviraj Chauhan winning the battle against Ghori were stacked in Prithviraj’s favour, and if the fight had been fair, concocted history would not look for scapegoats like Maharaja Jayachandra to take the fall for what happened.

Nayachandra Suri’s famous poem — the Hammira Mahakavya — clearly enunciates how only two battles were fought between Prithviraj Chauhan and Ghori. It is not true that Prithviraj Chauhan forgave Ghori. The often-repeated tale of seventeen battles with Ghori and Prithviraj’s soft-hearted forgiveness is a lie.

A lie that repeated itself so often it became the truth.

The enemy did not fight fair.

It was a night raid that smacked of treachery and cold-blooded murder.

A Rajput fights with an honour code, and is known to give his life rather than break it.

A code like that did not stand a chance in the way the night raid was conducted, flouting all military protocols of decency.

The Hammira Mahakavya talks about how Prithviraj’s army was unable to wake up because the battle drums had been punctured. For it was the battle drums that were traditionally used to rouse the army.

The horses were cut from their tethers. Surrounded, the soldiers were killed in their sleep.

It is not that the Rajputs did not conduct night raids. They have been known historically to have used the dark of night for its element of surprise, but then, they did not cross the ethical line of battle conduct that was the norm in ancient and medieval India. The same cannot be said of Islamic invasions across the world, from Byzantium to Andalusia.

Prithviraj’s alleged ‘capture and torture’ in Afghanistan existed only in the imagination of a poet who went by the name of Chand Bardai. For it is said that Chand Bardai authored the literary composition of Prithviraj Raso on Prithviraj Chauhan’s life.

This principal source of the falsehood around Prithviraj’s life and death was not written during Prithviraj Chauhan’s time, but a good 400 years later, circa 1600 CE. Chand Bardai was not one poet, but many poets who used the nom de plume. It is but understandable that with each retelling, the story was embellished according to the mood of the time till original events were lost in translation/transmission.

Prithviraj Raso is also riddled with many historical inaccuracies:

The birth of Samyogita: according to Raso, she was born in S.1133.

By a stretch, and piecing together all accounts, even if she did exist, she would have been a good eighteen years younger than Prithviraj Chauhan, had she got married and had children with him, probably at the age of seven. So far, this has no precedence or antecedence in Rajput history or human biology.

Prithviraj Chauhan was 26 years old when he died.

Quite obviously Samyogita did not exist.

Notably Prithviraj Raso does not call Jayachandra traitor. Instead, Jayachandra is praised for his heroic feats that terrorised Ghori.

Following Prithviraj’s death, it was Maharaja Jayachandra who absorbed the shock of the battle aftermath for at least a couple of years. It was he who prevented thousands of temples from being razed to the ground.[6] Except in accounts by Firishta, there is no other record of the Ghurid army moving towards Kannauj. And even Firishta’s account suggests that the Ghurids suffered heavy losses in the battle they supposedly won.

It was in circa 1600, again a good 400 years later, that Abdul Fazal first demonised Maharaja Jayachandra in Ain-I-Akbari.

The religious practice of concealment and deceit prescribed in Islam as Al Taqiyya has been well known since medieval times.

Bards, poets, and historians have been religiously duty bound to extol the glories of Islam, even if it required subterfuge.

Since the time of Ain- I-Akbari, an uninterrupted villainization of Rajput valour has become set in stone, almost literally.

Prithviraj’s humiliating torture and imprisonment seems well-designed to make the Rajput look weak, vulnerable, and humiliated in front of the might of Islam.

The dehumanisation of women has always been the leitmotif in Islamic conquest, and Samyogita’s role as the abjectly violated woman becomes a categorical imperative. If the woman herself did not exist, then she was created, if only in the diseased minds of propagandists.

Internecine battles among the Rajputs also created the smoke-and-mirrors effect to deflect from the actual sequence of events, events that did not put the invader in a good light.

In 1936, the Bharat Sanshodhan Mandal approached several political parties of the time with evidentiary support to correct this bit of history around Jayachandra. But this attempt was thwarted then, as it is thwarted now. With independence in 1947, Maulana Azad became the country’s first education minister. While the conqueror’s history was printed in school books under his watch, hyphenated entities like IPTA captured the country’s popular cultural imagination through film, art, and literature. Self-appointed custodians of India’s ‘secular fabric’ – ‘eminent’ intellectuals like Habib Tanvir and Romila Thapar — ensured that dharma rakshaka kings of Bharatavarsha were tarred and feathered.

While this narrative was being written, voices of local historians in local universities were drowned out. A professor of medieval Indian history, Ramesh Tewari, pointed out that barring Chand Bardai, the court poet of Chauhan, no historian has branded Jaichandra a ‘traitor’.

Citing the works of 11th century poet Ballabha Deo, Hindi critic Ram Chandra Shukla said that Jaichandra had not done anything which could be termed as ‘treason’.

Shukla has also made references to the writings of two poets of the time, Bhatta Kedar and Madhukar, who have showered praises upon the king of Kannauj.

A chronicler of Kannauj’s history, Anand Swaroop Mishra, and a well-known writer from the area, Luxmikant Pandey, have lauded Jaichandra as a ‘great king’.*

But vernacular voices are known to fall on deaf ears.

Today, we have reached a time when left, right or centre, communist or capitalist, ‘Jaichand’ is a synonym for ‘traitor’.

A harsh reminder of the extent of indoctrination of our people.

It might well be asked — how does it matter, and why is it even important?

History is not just a subject in school to get passing marks in.

History is a civilisational identity.

And when villains are valorised, and valour is villainised, it’s not par for the course.

It’s a course that needs to be corrected.

The process has begun.

The Member of Parliament withdrew her statement on Jaichand.

A group of Rajput history enthusiasts led by Gajendra Bisen and Yashasvi Pratap have been painstakingly compiling citations, references and primary sources to piece together lost portions of Rajput history.

All citations and references in this article have been provided by them.

[1] Mass sexual assault is the collective sexual assault of women, and sometimes children, in public by groups of men. Typically acting under the protective cover of large gatherings, victims have reported being groped, stripped, beaten, bitten, penetrated and raped.[1] Wikipedia

Shivani Singh is a novelist who writes historical fiction. Her first novel Raja is Dead was published by Harper Collins in India and Romania. Secret of Sirikot and Lonely Gods were published by Hachette. Nalanda, published this year by Amaryllis will also be available in Hindi and Marathi