A Tireless Protector of Written Word: A tribute to Sri Sambandha Sivacharya 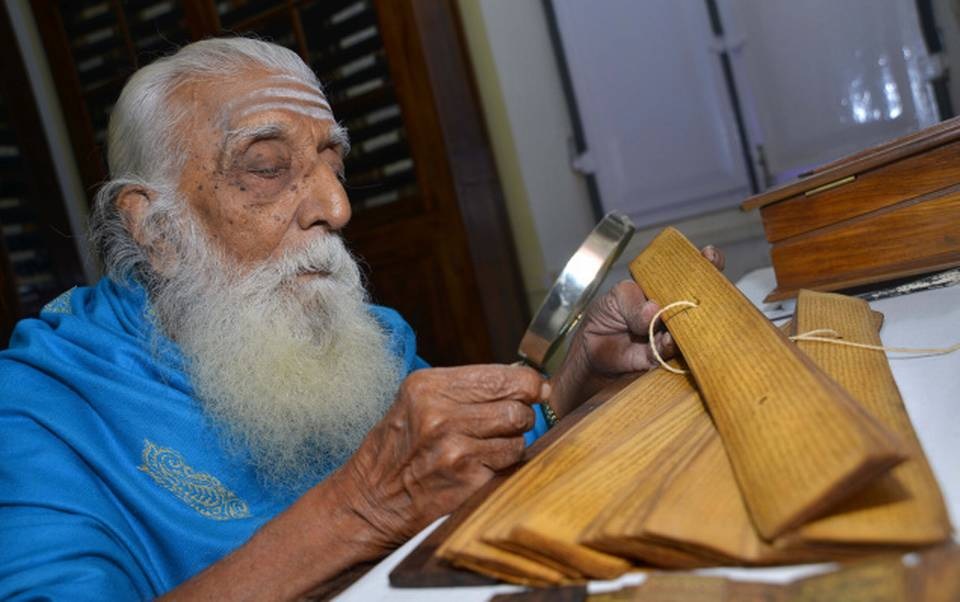 On 16 June 2019, ShivashrI Sambandhasivacarya attained Shiva-sAyujyam at his home in Cuddalore at the ripe old age of 92. He hailed from the clan of Adishaiva brahmins, a community of hereditary priests who served at Shiva temples functioning as per the siddhanta shaiva agamas. However, ShivashrI Sambandhasivacarya was moved by the plight of those very Agamas that his community had preserved for generations. Owing to neglect and the fact that serious study of those scriptures had become unviable for many temple priests, many palm-leaf manuscripts were facing the possibility of vanishing into eternal oblivion, a possibility accelerated by the warm and damp climate of South India (the best and oldest manuscripts of important Indic texts are often found in cooler locales like Nepal).

Many of us have little appreciation for how the printed publications of our precious texts come to be. Very few may understand the importance of the preparation of a “Critical Edition”, a process, or rather a laborious endeavour that requires an enormous expenditure of energy and time. We take it for granted that household favourites like Mahishasura-mardini stotram (“ayi giri Nandini…”) or Vishnu sahasranamam or Hanuman chalisa or the hundreds of other hymns get published in thousands of books in dozens of languages across India. How many of us stop to think how the very first printed texts of our favourite hymns were prepared? From manuscripts of course! Even the one or two variations we encounter in the editions of our favourite stotras—they are not conjured up out of thin air. Even these variations can be traced to a palm-leaf manuscript in some bundle, now sitting on the dusty shelves of an old library. When these varied manuscripts are compared and analysed for possible scribal errors, doctrinal inconsistencies with established texts and gaps (due to that part of the manuscript being lost to time or termites-could be as small as a letter or large as an entire, vital part of a sentence), a better, if not perfect, edition of the text emerges.

Now, Shaiva Siddhantam is a very important school of thought, representing a rich blend of ritual, liturgy and philosophy. The Siddhanta Agamas, numbering as 28, have played a huge part in shaping the sacred landscape of a significant part of southern India, most significantly in Tamil Nadu. The most concrete testimony to their historical value and influence is visible in the form of majestic, living Shiva temples, where worship, prescribed as per these Siddhanta Agamas and notwithstanding challenges, takes place even today. The philosophical system of Shaiva Siddhantam traces its developments from the vidyapada (or jnanapada) sections of the Siddhanta Agamas (academic opinion is not conclusive; but as of now, the earliest agama texts are dated to the 5th century CE) to the Sanskrit treatises written in Kashmir and Madhya Pradesh, to the extraordinarily rich body of philosophical treatises written in Tamil in Tamil Nadu from the 12th century onwards. Due to the cruel vagaries of time, in the form of brutal invasions in much of Northern India, our textual heritage for Siddhanta Shaivam comes mainly from Tamil Nadu.

These manuscripts, found and unfound, inch a little closer towards oblivion every passing day due to the South Indian climate. But even if they are microfilmed and successfully digitized, the labour and expenditure would be futile if no critical editions, as explained above, are being prepared. This is where Shivashri Sambandhasivacarya comes in.

Born in a family of Shaiva temple priests, devotion to Shaiva heritage was naturally present in Shivashri Sambandhasivacarya’s blood. His father, D. Subrahmanya Gurukkal, was his first teacher when he was initiated into basic temple rituals and study of Veda-mantras at the tender age of seven, as is typical of most Agama temple priests and Vedic scholars who begin their spiritual career at that age.

In 1969, ShivashrI Sambandhasivacarya decided to give up his familial vocation as a temple priest and pursue a calling to save precious manuscripts of Shaiva Siddhantam. Joining the French Institute of Pondicherry in 1969, under the leadership of well-known Shaivagama scholar, N.R. Bhatt, he painstakingly collected the manuscripts of Shaiva Siddhanta texts and has played a vital part in helping the Institute’s scholars in their efforts to prepare critical editions of these precious texts. The Matangaparameshvara, Sukshmagama, Ajitagama, Rauravagama, Diptagama and Panchavaranastava are a few of the works which have come out as printed editions, available for purchase by readers with an interest in Shaiva Siddhanta heritage. Many of these texts, in particular the Rauravagama and the Matangaparameshvara, represent some of the most important productions of our Indic heritage, for their value in the study of Indic metaphysics, soteriology, ontology (the shaiva concept of tattvas), philosophical polemics (arguments against other schools) and ritual (a significant portion of which has survived, for more than a millennium, intact up till this very moment).

ShivashrI Sambandhasivacarya was one of the finest flag-carriers for the indispensability of traditional scholars. He was trained in reading the following scripts: Tamil, Grantha, Telugu, Malayalam, Tigalari, Sharada, Nandinagari and Newari. It must be noted that some of the most important manuscripts of Shaiva texts are found far from Tamil Nadu, in Kashmir and Nepal, explaining the importance of Sharada and Newari.

Shivashri Sambandhasivacarya was honoured with international recognition such as the Palmes Académiques award in 2009 for his peerless contributions to Sanskrit studies and the Ikuo Hirayama award. Much more locally, he was honoured by the All India Adisaiva Sivachariyargal Nala Sangam (A seva sangha for Adishaivas, based in TN) in 2011 for being an exemplary member of the hoary community. A former alumnus of the Madras Sanskrit College, who graduated with Shiromani titles in the fields of Sanskrit Literature and Mimamsa (A traditional field of study of Vedic Hermeneutics and Exegesis), he received the Kalasala Ratnam title from the Peethadhipati of the Kanchi Kamakoti Peetham, His Holiness Shri Shankara Vijayendra Sarasvati Shankaracharya Svami—a rather apt title, meaning, “Gem (Ratnam) of the College (Kalashala)”.

But national-level recognition from the Government of India came only in 2014. Shivashri Sambandhasivacarya was honoured with the Presidential Award of Certificate of Honour for his lifetime achievements in Sanskrit and Shaiva Siddhanta studies. The award consisted of the certificate as well as a Rs. 5 Lakh cash prize. Shivashri Sambandhasivacarya had remarked that it was a reward for his hard work and purvajanma punyam. Perhaps, it was our punyam that India was blessed with such a scholar. Shivashri Sambandhasivacarya noted that while other agencies took the initiative to duly recognize scholarship, Union and State government Awards had to be applied for by the individual. Initially reluctant to apply for the award, Shivashri Sambandhasivacarya was eventually coaxed by his well-wishers and admirers to submit the application. Perhaps, the best way to honour the memory of traditional scholars like him would be to take greater initiative to recognize our talent and nurture them with sufficient incentives to keep doing the incomparable work they do, which they do only because of a deep and abiding passion for that heritage.

The author is a 27-year-old student, born in the land known as Bhārata, where the Hindu dharma was born, raised all his life in the Southeast Asian City-State of Siṃhapurī, and currently reading law somewhere in the Western lands; a keen student of the myriad of traditions within the vast ocean of Hinduism as well as fellow polytheist traditions.

The Dialogical Manifestation of Reality in Agamas – 2