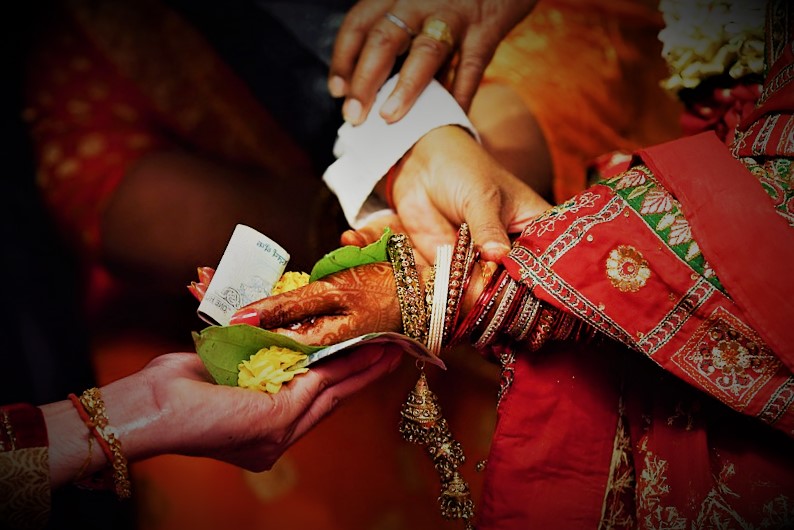 I am pleased that Professor Nandini Bhaumik is a Hindu priestess and I fully endorse the movement she initiated. Nandini is at the helm of ‘Shubham Astu’, a group of female Hindu priests who have been crashing gender stereotypes and the patriarchy in their own graceful and harmonious way (To Give or Not to Give: ‘Kanyādāna’ in an Age of  Idiocy and Instantaneity by Sahishnu Bhattacharyya, India Facts, November 9, 2021). Her aptly named group plans to slowly change things. They claim to have officiated several weddings where the Kanyādānam ritual was omitted.

Shubham Astu interprets the word Kanyādānam, a commonly practiced ritual in Hindu weddings, as a by-product of patriarchy. They further claim that the word literally means donating one’s daughter. Therefore Shubham Astu offers ‘The No-Kanyadan Wedding’. One such wedding in Kolkata apparently went viral after a guest saw the father refusing to perform the kanyadaan, and tweeted about it.

I wish to examine this issue somewhat more objectively and offer an alternate approach to resolving the dilemma.

I have been assisting Hindu families with the wedding plans and ceremonies of their sons and daughters in the United States for nearly four decades. Sometimes these ceremonies involve a Hindu bride and a non-Hindu groom or vice versa who belong to families which immigrated from different parts of India. The non-Hindus include people from several Christian churches, and even of Jewish and Shaman faiths.

Over these years, I have been touched by the desire of the couples to understand each of the several steps they will take during the ceremony. I first make sure that they really want a traditional wedding and are not doing it to please someone else. Most are concerned about the time it will take to complete the ceremony. I try to impress upon them the need to retain certain essential steps and that the time involved  depends upon how well they have been able to absorb the details learnt during the meetings with me and during the rehearsal on the night before the wedding. In our format, an hour is adequate to include the essential steps. However, the families may choose to add additional steps and songs based on their own family practices which may require additional time.

The Vedic wedding ceremony we practice today is based on the wedding steps defined in Mandala 10 of Rig-Veda where the marriage ceremony of Suryā, the daughter of Surya is described in great detail and discussed in my book Vedic Wedding Book: Origins, Tradition and Practice (Penguin Random House, India, 2019, 16-24). Note: All page numbers cited in this paper refer to the Penguin edition).

My experience with the current Kanyādānam issue surfaced as early as 1988 at the very first wedding ceremony I performed. More about it later. One problem I see in the Shubham Astu approach is their misinterpretation of the concept of Kanyādān.

I must say that there is absolutely no reason to blindly follow mandates of our scriptures and not to question, analyze, interpret, modify and/or adapt, based on the current framework and body of knowledge. Constructive criticism is the hallmark of progress in any field. Any number of examples can be cited which may have been quite relevant thousands of years ago and now need careful modification to maintain the spirit of a statement. For example consider the familiar shloka invoking Mahaganapati:

This prayer to Mahaganapati is aimed at removing obstacles from all actions undertaken by the aspirant at all times. A literal translation must mean that all one needs to do is pray once and that should do it for all time in one’s life. Clearly that makes no sense but it may have eons ago! I modified this decades ago to replace सर्व sarva with अद्य adya (current) and सर्वदा sarvada with the word अद्यदा adyada (now)!

Let me cite from an extract in the “Author’s Note” (ibid. xi).

In the course of my service as a wedding officiate I have occasionally encountered couples and families who raise questions about the relevance of a ritual in the ceremony. These are legitimate concerns and questions that require analysis and rationalization and need to be taken seriously. Let me cite an example.

It was my very first attempt to perform a wedding ceremony between a South Indian family and an American groom. After I prepared the plan and offered it to the Hindu parents, the bride’s mother surprised me with a question: “Is my daughter a thing to be given as a gift?” She was of course referring to the kanyādānam ceremony. My surprise was based upon the fact that this step in the ceremony was in their own family tradition. That made me think about the source of such concerns and in a way I am happy to state that we have the right and indeed the responsibility to review what our families have practiced over centuries in order to understand the content and intent of our ritual practices and, where absolutely necessary, amend appropriately under the guidance of knowledgeable persons.

Returning to the question, I believe there are several reasons for the confusion. One reason is that most do not know the original mantras and/or their translation and meaning. The most obvious other reason is the translation of the title itself. कन्यादानं (kanyādānam) in Sanskrit is popularly translated as gifting the bride. It is necessary to argue the different interpretations of the word in Sanskrit. The most popular use of the word dānam has been to connote charity given to someone less fortunate. It is therefore not surprising to note an alarming objection to use that popular sense of the word in the context of “giving away” the bride. Note the focus of the critics is on dānam charity and not on the receiver (groom) who obviously cannot be considered less fortunate!

An alternative approach might be to use other, less objectionable, titles and terms based on the meaning of the mantras. Even before this question came up I had, in my practice, made a slight, noncontroversial change by including the mother of the bride in the sankalpam chant. With this modification, the father would say:  “In order for me to attain ब्रह्मलोक Brahmaloka and to liberate my ancestors, I along with my wife धर्मपत्नी (dharmapatni) offer you, the embodiment of Vishnu, my daughter, this beautiful young lady, fully adorned with jewels and of excellent character” (page 119). No patriarchy angle here!

When you read that part of the ceremony in my book you will appreciate the full meaning of the transfer of responsibility from the parents to the love and care of the new family. That is the means for attaining Brahmaloka for the bride’s family.

Further, I must state that, in my practice, without any exception, this ceremony has been considered by the hundred or so families, the couples and the guests as impressive, touching and dramatic. So let us retain the ritual. The possible alternative titles might be कन्या प्रदा kanyā pradā or कन्या प्रादियते kanyā pradīyate, i.e. we offer the bride. The mantra specifically states

Adaptation, rather than abandon, is the key.

The other problem that has led to this controversy is the tendency to focus on one ritual in the ceremony instead of reviewing the  ceremony in its entirety. For example, I could take issue with the Vara Puja step. Literally it means worshipping the groom by the bride’s family. This interpretation deals a severe blow to the concept of equality, let alone sustaining the patriarchy angle! But it becomes meaningful only when we focus on the bride’s father referring to the groom “in the form of Lakshminarāyana” (page 110 of my book), and later the groom declaring “I am He, you are She” (page 115) implying the belief that for the duration of the ceremony the groom is looked upon as Vishnu and the bride as Lakshmi.

As the ceremony proceeds the groom is asked to promise that in accepting this union, he shall not cross the boundaries of dharma, artha and kāma. Clearly this would make no sense if the bride is looked upon as an object that was “gifted away” moments earlier or the groom is Vishnu!

Further on in the ceremony during the blessing of the bride ritual the priest says साम्राज्नि …भव, samrājni … bhava “Be queenly” (see page 142-143). You wouldn’t use that exalted status if she were “a mere object” that was given away.

It is therefore best to look at all the ceremonial steps and grasp the ancients’ intent in formulating the rituals. When we do that the ritualistic steps become more meaningful and enjoyable. I can certainly go on and on. Therefore my appeal to those who are reviewing the Vedic ceremonies is to be more objective, consider the times, the language, its intent and content, its beauty and magnificence – all that we have inherited from our ancestors.

Adapt, if you must, but try not to abandon!