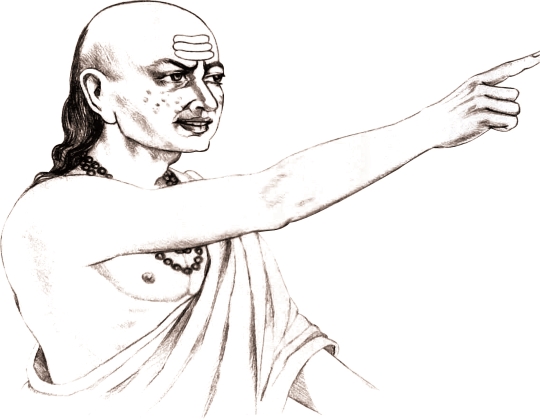 The wise Viṣṇugupta Cāṇakya, also known as Kauṭilya, who propelled the Mauryan Chandragupta to meteoric heights, while uprooting the tree of the wicked Nanda-s and cleansing the taint of the Macedonian barbarians on the land of the bhārata-s, uttered words that remain vivid even after 2300 years.

Based on the textual evidence, in the form of the mantra practice, deities, and urban layout, we hold that the arthaśāstra, as we have it, comes from a time close to that of viṣṇugupta. It is either his own text or that of his near successors. One of his near successors was viṣṇuśarman, who composed the pañcatantra inspired by kauṭilya. There were many later successors, like kāmandaki, who composed his own authoritative tome on political science based on cāṇakya’s ideas. Consequently, cāṇakya-s influence was central on all Hindu political thought that followed. Indeed, he was praised thus by kāmandaki the great commentator on Hindu political wisdom.

By the vajra-like abhicāra of the one who shone like the flash of the vajra,

the opulent mountain of the nanda-s fell root and branch.

Who alone with his ministerial power [pun on mantra-power],

which was like the power of the wielder of the śakti [skanda],

conferred the earth on candragupta, the moon amongst men.

The one who churned out the nectar of political wisdom,

from the vast ocean of state-craft, to that wise viṣṇugupta our salutations.

From the great work of that man, who had explored the limits of knowledge,

we are going to extract and teach in brief the lore, as promulgated by the knowers of state-craft.

Thus, the legend of cāṇakya and his knowledge was very widely known and practiced in the early medieval period. However, the arthaśāstra text itself was lost in the later medieval period, and was only rediscovered in 1904 CE by Mysore Shama Shastry. He published the text along with a translation that marks one of the most momentous events in Indian philology.

[pullquote]Whoever is desirous of progress of the world shall always do so with the upraised rod of chastisement.[/pullquote]

In this essay we shall briefly consider the description of the great AchArya’s ontology of Hindu knowledge. In the arthaśāstra he says (AS 1.2.01-12):

The branches of knowledge are: logical analysis, the three-fold ritual chants [the veda], business and political science.

The school of Manu holds that [there are only three branches]: The three-fold ritual chants (the veda), business and political science. Because logical analysis is only a special branch of the veda.

The school of bṛhaspati holds that [there are only two branches]: Business and political science. Because the veda is only a cloak for those who are well-versed in worldly customs.

The school of ushanas holds that there is only one branch: political science. Because the origins of all types of knowledge are [ultimately] united in it.

However, kauṭilya holds that the branches of knowledge are verily only four [i.e. logical analysis, the veda, business and political science].

The defining feature of all branches of knowledge is that by knowing them one can learn of dharma and artha.

Logical analysis consists of the systems of sāṃkhya, yoga and lokāyata

The systems of logical analysis [i.e. sāṃkhya, yoga and lokāyata] are always the lamp illuminating all knowledge and the means of all actions. It is the foundation of all dharma-s.

[pullquote]Unlike delusional modern liberal expositors, cāṇakya is clear that learning analytical devices is not for all and sundry.[/pullquote]

Later in the arthaśāstra, cāṇakya explains his position on daṇḍanīti, while not according it the status of being the sole knowledge system, he accepts the basic tenet of the importance of daṇḍanīti as per the auśanasa school in the maintenance of knowledge, dharma and business:

The daṇḍa [is the power] by which the application and the growth of the systems of logical analysis, the veda and business are upheld. Its management is known as political science. It is the means by which new acquisitions are made, profits are gained [in business], the acquisitions are kept secure, security and growth [are achieved] and the fruits of growth are redistributed among the deserving.

Nevertheless, with respect to the actual application of daṇḍa, viṣṇugupta advocates what might be termed the path of moderation:

Whoever is desirous of progress of the world shall always do so with the upraised rod of chastisement. Never can there be a better instrument to bring beings [implying people and other animals] under control than the application of chastisement.” So the earlier teachers expounded [i.e. they advocated a police state].

“Not so,” says kauṭilya; for whoever imposes severe chastisement becomes tyrannical to the beings [a police state]; while he who is mild in chastisement is despised/disrespected [a soft state]. But he who imposes punishment as deserved is respected [the ideal Hindu state].

The acquisition of knowledge can only culture those whose intellect is endowed with the abilities of discipline, learning from verbal instruction, grasping concepts, memory, discrimination, inference and applying falsification, but not others [those who lack these].

In conclusion, we opine that viṣṇugupta’s analysis of the knowledge to be one of the most appealing among those we encounter in early history. We posit that the ānvīkṣikī approach has been the most successful of the Hindu approaches to knowledge, though it eventually declined compared to some of the other schools.

It is not something widely inculcated in modern education of Hindus. Verily, this is manifest in a generally poor grasp of evolutionary thinking and philosophy in the realm of the general physical universe, biological systems, societies and languages. This is also compounded by the general disinterest in acquisition of vast amounts of readily retrievable, well-classified, and usable information in the mental “hard disks” through application of discipline. Indeed, it is not uncommon to hear in the modern education systems that information is merely clutter, and that rather they strive to impart logical thinking.

Of course today one can extend mental “hard disks” with those made of silicon, but even to use the latter effectively, one needs to have the discipline of information acquisition and storage. Only then is logic of any value. It is clear that viṣṇugupta realized and emphasized the importance of being widely informed. He stresses the point of how the kṣatriya needs to constantly acquire new knowledge and revise what he learns.

Verily from hearing (i.e. gathering information) emerges knowledge; that knowledge allows its application; from its application one becomes prudent. This is the power of knowledge.

Finally we should point out how viṣṇugupta emphasizes the role of the educated king and protection of knowledge by the king:

The king who is educated in the fields of knowledge, verily interested in administration of his people, and inclined to benefit all beings will enjoy the earth unopposed.

These points were largely lost to most recent rulers of jaṃbudvīpa, such as the post-independence dynasty that lorded over our nation.

On the other hand, interestingly, the front-line thinker of the modern Hindu revival, śrī Sitaram Goel, took a dim view of the political tradition of the arthaśāstra. He attributed the inability of the Hindu rulers to ultimately stanch the Mohammedan catastrophe to them adhering too closely to viṣṇugupta’s maṇḍala theory of allies and foes.Thus, Goel reasoned that, acting as per the maṇḍala theory, they were unable to see the beards knocking at the gates of India as an existential threat. Instead they simply saw them as residents of the outer maṇḍala, who could be used against the neighboring maṇḍala by the central mahā-maṇḍaleśvara and his mahā-sāmanta henchmen.

We are not sure that Goel’s criticism is entirely justified. In fact, we simply hold that the genuine wisdom of viṣṇugupta was lost at some point in the medieval period and replaced by a lesser version of the maṇḍala theory (incidentally this is the very version parodied so humorously by the great kavi daṇḍin in his novel the avantisundarī kathā). We see the decline in the “higher” knowledge of cāṇakya as being the cause of the demise of the Hindu power under the Mohammedan ravages (for example, the above discussion of knowledge would have helped any one). Ironically, even the Mohammedans appreciated the wisdom of cāṇakya in the form conveyed by viṣṇuśarman. We are informed that it was part of the curriculum of the education of Osman sultans like Kanuni Sultan Süleyman who raised the Mohammedans the pinnacle of their power.