Addition of Yoga to Directive Principles of State Policy: An Open Letter to PM Modi 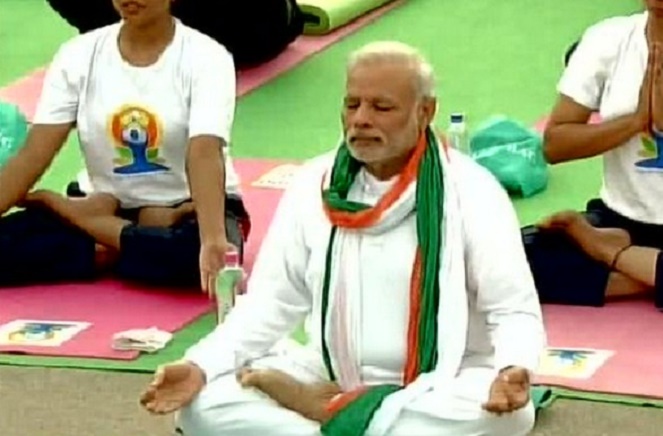 At the outset, I wish to congratulate you for conceiving the idea of International Yoga Day. This important development has undoubtedly created awareness about the utility of Yoga for overall improvement in physical and mental wellbeing. However, I am puzzled at why your government has not proposed the incorporation of Yoga (postures and/or philosophy) as a Directive Principle of State Policy (“DPSP”) in the Indian Constitution. I cannot think of any serious concern that should prevent your government from initiating a debate for an amendment that incorporates Yoga as a DPSP.

DPSP are principles or guidelines that the state must consider while enacting laws and formulating policies. Though, DPSPs were borrowed from the Irish Constitution, their origin can be traced back to the United Nations Universal Declaration of Human Rights, revolutionary France and the declaration of Independence by American colonies. India, however, has successfully indigenized this foreign borrowing by introducing concepts like prohibition of cow slaughter, setting up of village panchayat, uniform civil code, educational and cultural rights of Scheduled Castes and Scheduled Tribes, etc. within the DPSP framework. In very simple terms, DPSP can be defined as a set of principles that aim to create a better life for its citizens. Though, mostly non-justiciable, they play an important function of crystallizing some of the core tenets for which our collective civilization intends to strive for. These principles are the driving force behind all executive actions and also serve as soft guidelines for the judicial branch.

By elevating the cause of Yoga at an International level, your government has proved its seriousness to promote Yoga as an instrument for creating a better world. As per the UN Website, at the time of the adoption of the resolution, proclaiming 21 June as International Day of Yoga, the representatives from Sao Tome and Principe also suggested, that Yoga will promote clarity of vision and action. These representatives also said that Yoga would further prevent contradictions, which often generated confusion while making rules and promoting laws. Parts of the UN resolution 69/131 read as under:

“Underscoring the fact that global health is a long-term development objective that requires closer international cooperation through the exchange of best practices aimed at building better individual lifestyles devoid of excesses of all kinds, Recognizing that yoga provides a holistic approach to health and well-being, Recognizing also that wider dissemination of information about the benefits of practicing yoga would be beneficial for the health of the world population,

One can easily deduce from a reading of the above paragraph that a special resolution for Yoga was required because the obligation to promote Yoga did not stem out naturally from the general obligation to promote health and well-being. After the adoption of the UN resolution, the department of AYUSH was upgraded to a full-fledged ministry in 2014 and it kept itself busy in organizing events for the promotion of International Yoga Day in 2015. The department derives authority for such executive actions from the adopted resolution, even though those actions were justified under Article 47 (improve public health) of the Indian Constitution. From a simple examination of the chronology of Yoga related efforts made by your government, one can easily conclude that the validation for such promotional activities did in fact originate from the adoption of the UN resolution. Therefore, Yoga is more than just an instrument to promote public health and hence requires adequate recognition.

DPSP are not unique to the Indian Constitution. Constitutions of Ireland, Ethiopia, Ghana and Nigeria provide for DPSPs, as well. As you’d remember, on your recent visit to Ireland, a group of Irish children welcomed you by reciting Sanskrit Shlokas. In your speech you pointed out the sad irony of not being able to do the same in our nation owing to our interpretation of secularism. Let’s say that on your next foreign visit, the host state presents you with a copy of its Constitution that has Yoga as one of its directive principles. That may inspire us to emulate it in our own Constitution. Such an inspiration, however, would come with a lot of remorse for your government for not acting in time. It’ll yet again make us realize how we tend to repeatedly fail, when it comes to an active dissemination of our own traditions and culture. The framers of our Constitution were certainly inspired from the Constitutions of United States, Germany, and Ireland, but perhaps we should grab this opportunity to take a lead in giving Yoga its rightful place in our Constitution.

The Supreme Court of India in its judgment in Maganbhai Ishwarbhai Patel vs. Union of India (1969 AIR 783) laid down some principles in respect to International obligations vis-a-vis Article 253 of the Constitution of India. As per the judgment in this case, legislative measure is not needed if the rights of the citizens of India are not affected by an International obligation, however, the making of a law is necessary when the treaty affects or modifies the rights of citizens or others. Without going further into the merits of this case and without settling the debate on how an International obligation ought to be enforced in India, I simply wish to bring to your attention that your government’s efforts to popularize Yoga have already stirred a controversy on whether it affects the fundamental religious and cultural rights of various communities in India. Such controversies, further necessitates an action by your government to elaborately discuss the scope, assure and formally indoctrinate your government’s intention to promote Yoga. A Yoga DPSP would provide your government with a strong basis to promote Yoga and would harmoniously interact with the right to freedom regarding attendance at religious instruction under Article 28 of the Indian Constitution.

Even though one can take a position that a UN General Assembly resolution is non-binding, such position, however, would be difficult and rather bizarre for your government to take, given that the resolution itself was proposed by none other than you in your speech at the UNGA, on September 27, 2014. In your speech you said:

“Yoga is an invaluable gift of India’s ancient tradition. This tradition is 5000 years old. It embodies unity of mind and body; thought and action; restraint and fulfilment; harmony between man and nature; a holistic approach to health and well-being. It is not about exercise but to discover the sense of oneness with yourself, the world and the nature. By changing our lifestyle and creating consciousness, it can help in wellbeing. Let us work towards adopting an International Yoga Day.”

Also, informal consultations on the draft resolution entitled “International Day of Yoga” were convened by the Permanent Mission of India. Therefore, any Indian government would find it quite awkward to argue that they are not bound by the resolution. On the contrary, giving Yoga a place in our Constitution would further assure the supporting nation states about our seriousness towards the cause. More importantly, it will empower your government to promote Yoga by deriving legitimacy from the Constitution itself rather than only resorting to the adopted resolution.

In your recent speech to the US congress, you said that India has not claimed any Intellectual Property rights on Yoga, essentially reiterating that Yoga is India’s gift to the world. Even though, your successful proposal for International Yoga Day, has secured Yoga to its roots, it is undisputed, that this intervention ideally should have been made many years ago by the previous governments. Seems like, we are at a similar junction, now. We can either choose to be passive and wait for other nations to show us the way or we can be proactive and learn from our past oversights and mistakes.

Famous personalities like Sam Kutesa, Ban Ki-moon, B.K.S. Iyengar, Sri Sri Ravi Shankar and Sadhguru have suggested that Yoga is more than just postures. According to them, the practice of Yoga also helps in bringing thought and action in harmony, development of peace, skill in performance of one’s actions and inner well-being of a human being. Yoga as DPSP is already in compliance with your government’s obligations under Article 47 (obligation to improve public health), Article 51 (Promotion of International Peace and Security) and Article 38 (secure social order).

If Yoga is recognized as a DPSP, it will lead to a broader testing of the limits of secularism. Even though, Yoga has evolved in a religious ecosystem, the resulting benefits are now scientifically and empirically tested to a great extent. Yoga as DPSP will also provide a formal platform to people to voice their concerns, whenever they feel that the government sponsored Yoga is in breach of their fundamental religious rights.

Yoga is a multi-billion-dollar industry. By taking upon itself the responsibility of accurately promoting Yoga, your government can also establish certification centers that will certify yoga styles and systems around the world by considering diversity within eastern and western traditions. This process of certification will further secure Yoga to its roots and will also safeguard the interests of Yoga practitioners around the world. Western deviations in the absence of any efforts by the Indian government is the reason for the damage to the holistic basis of Yoga and has resulted in its identification as purely a health/stretching exercise.

I am hopeful that you will take cognizance of the suggestions in my letter. It will be interesting and exciting to find out, when and how we develop a consensus on this, but for now, I urge you and your government to at least start a discourse on recognizing Yoga as a DPSP.

The author would like to thank Yogesh Pai of New Delhi for his inputs.