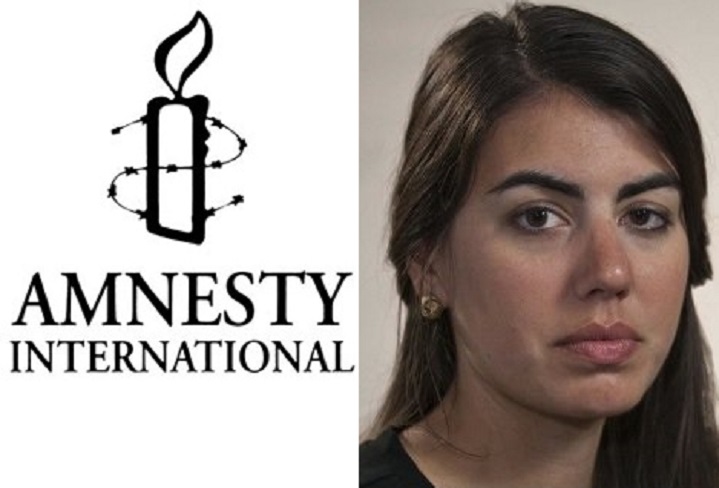 Broke the law, and proud of it. That seems to be the attitude of Christine Mehta, an employee of Amnesty International who as an American citizen applied and received the status of an OCI.

In an article in the Hindu on 2 July 2015, Ms. Mehta, described the situation in which her OCI card was revoked and she had to leave India.

Of course if it was an unfair reason we would’ve been supportive of her ordeal and sympathised with her. But it seems the revocation of her OCI status was due to the officials in the GOI being miffed with her research work which she did in Jammu and Kashmir, regarding the sensitive issue of AFSPA.

But what is this? It seems she is complaining about the GOI upholding the law which she knowingly broke in conducting her research, as she states-

…….when Amnesty International decided to move me to a research position, we discovered a restrictive clause listed on India’s Bureau of Immigration website stating that OCI and PIO were prohibited from conducting “research, missionary or mountaineering activities without the prior permission of the Government of India.” As I was being hired to research abuse of power and human rights in Jammu and Kashmir, there was a debate about the consequences I might face, including deportation and loss of my overseas citizenship status…..There are hundreds of PIO and OCI cardholders who have been working as journalists, development workers, and researchers in India without any problems. The provision seemed outdated. The AII management was confident that the United Progressive Alliance government wouldn’t use the little-known and apparently rarely used provision against me. It decided that attempting to apply for permission would only draw unnecessary attention to my work, and invite the government to deny permission outright. ….

So Ms. Mehta did what she thought was the right thing- knowingly break the law. After all, in her warped reasoning, laws are meant to be broken.  The laws in question are as under:

i. Can  a  person registered as an OCI travel  to  protected  area/restricted area  without permission?

A: No. He/she will be required to seek PAP/RAP for such visits

ii. Can an OCI holder undertake Research work in India?

A: Yes, after getting prior approval/special permission from MHA.

iii. What are the consequences of furnishing  wrong information or  suppressing material information?

A: All the applications will be subject to  pre  or post enquiry depending on whether any adverse information is voluntarily  reported in the application or not.  If the Government comes  to  the  know that any false information was  furnished or material information  was  suppressed, the registration as OCI already granted shall be cancelled by an order under section 7D of the  Citizenship Act, 1955. The persons will also be blacklisted thereby banning his/her entry into India.

(All the details are available in the website of the Ministry of Home Affairs, Government of India. Head here.)

To use a baseball term, strike three and you are out. If Ms. Mehta was not informed about these procedures then she has every right to complain and accuse the government of misconduct. Yet her employers and she herself knowingly decided that since the law is rarely used, it can be defied. Just because the law is little-known and rarely used, it no way gives Amnesty International the comfort of bypassing it. Now Ms. Mehta’s research was related to human rights in Jammu and Kashmir which  automatically falls in  the domain of the Armed Forces Special Powers Act (AFSPA) . It should be clarified that AFSPA is an Enabling Provision to employ the soldier in a situation where the Policeman fails as elaborated in an earlier article:

….The Police has 24x7x365 permission to arrest anyone (except women, after darkness falls) with a warrant. In a scenario like J&K, this is extended to Army and other Security Forces to enable their deployment. The warrant, obviously has been done away with considering the fact that magistrates are virtually tethered to the safe areas of cities. The Police has the authority to arrest the delinquent….In J&K, this is extended to the Army and other Security Forces, but with a firm rider–the delinquent man shall be produced before the Police within 24 hrs plus travelling time. Any citizen facing death due to the action of any other person, has the sanction of the law to take appropriate action, even to the extent of causing the attacker’s death. Since our Policemen and Security Forces face such situations on a regular basis, they are provided weapons and ammunition for the purpose. The Police has the power to search a premise or a vehicle, which, is also provided to Security Forces in J&K. Where the Police fails and the Army scores over all the other forces is its provisions to prosecute the errant. The Army usually takes 80-120 days to complete an inquiry, summarise the evidence and subject the errant to a Jury-based process a la American Courts, called the Court Martial. ….

The last part is where Ms. Mehta’s employer Amnesty International claims violence is committed by the Indian state on the innocent J&K residents. But that is also the place where their bias becomes overt. They all speak of the situation harrowing in Kashmir since the 1990’s, not caring to gloss over the tormenting times in 1989-90 when Kashmiri Pandits were intimidated by jihadi sympathizers shouting  “Asi gacchei Pakistan, battaw rostiy; battaneo saan– We want Pakistan, without Pandit men; with Pandit women” followed by one of the worst ethnic cleansings carried out in post-independent India .

Indeed in Amnesty’s report on Kashmir which is close to seventy two pages, Kashmiri Pandits are given only two lines. This shows the concern AI has for the thousands of Kashmiri Pandits who were forced to leave their homes. Even now, thousands of refugees are languishing in uninhabitable refugee camps. Also notice Amnesty’s treatment of the armed jihadis as this image posted by journalist Shiv Aroor showed-

So that’s what they are now? Armed opposition groups?  Not terrorists? Are the ISI supported militants not non-state actors raising havoc? The report speaks of AFSPA but does it elaborate why it was brought in the first place?

Accepted the life of the average Kashmiri Muslim is not smooth but the root cause for this is the band of separatists led by the likes of Syed Ali Shah Geelani and Yasin Malik. As can be seen in the featured image of this article Ms. Mehta is conversing with Yasin Malik. So, can we assume that Amnesty International considers jihad sympathisers Geelani-Malik as human rights evaluators?

Not surprising since it is known that in February 2010, Amnesty suspended one of their famed members Gita Sahgal, it’s the then gender unit head, after she criticised her employers for its links with Moazzam Begg, who in Sahgal’s words is Britain’s most famous supporter of the Taliban. Amnesty’s then Secretary-general Claudio Cordone, claimed that defensive jihad was not antithetical to human rights. But security forces of an independent, sovereign nation should be criticized for protecting their country since democracy allows that!

Moving beyond Amnesty’s double standards, it needs to emphasized that Amnesty and its employee Christine Mehta knowingly broke the laws and faced the obvious outcome. Equally, it also brings into question the standing of THE HINDU which, even after knowing Mehta’s blatant disregard for Indian laws published her account as an “Exclusive.”