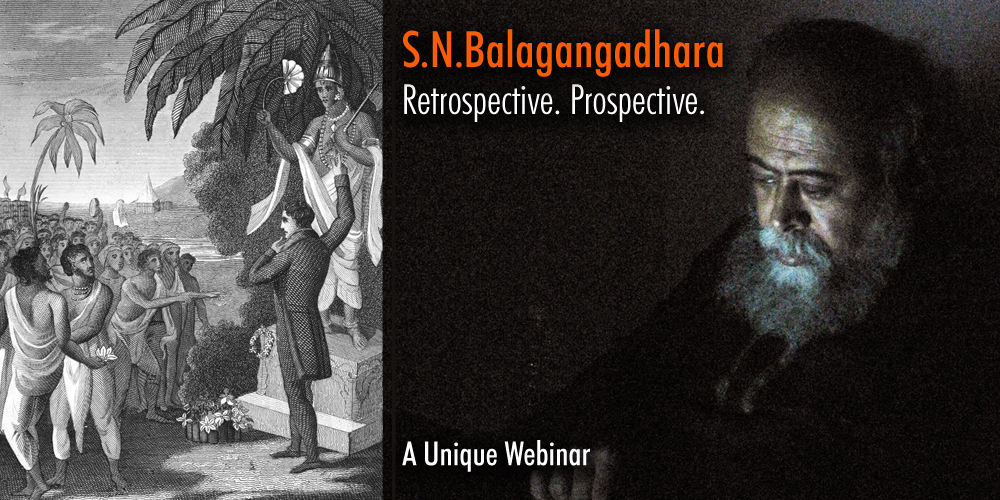 Indic Academy is conducting a unique webinar titled “An exploration into S.N.Balagangadhara’s Thought” on May 3rd, 2020 from 12:30pm to 6:00 pm IST. The seminar has three sessions with panel discussion by prominent scholars of The Ghent School of Thought furthering research programme launched by Prof. Balagangadhara — Dr. Jakob De Roover, Dr. Sarah Claerhout, Drs. Sarika (all from Belgium), and Drs. M.S. Chaitra (and other members from the Aarohi Research Foundation and Centre for Educational and Social Studies (CESS), Bengaluru). Panel discussions will be led by Prof. Balagangadhara (from Belgium) based on questions submitted by registrants from their reading of downloaded extracts of books authored by Prof. Balu.

One can read more about the Webinar at this page on Indic Today — http://www.indictoday.com/events/balu-webinar. Registration page can be accessed by clicking here. For those who are unfamiliar with Prof. Balu’s work, this article provides a very brief and preliminary note on his work along with references to books and websites with articles by other scholars from this school. Dr. Pingali Gopal from Warangal (India) has written excellent notes summarizing several books from The Ghent School of Thought accessible at the IndiaFacts website here: https://indiafacts.org/author/dr-pingali-gopal/.

Prof. S. N. Balagangadhara (Balu), a philosopher by training, has been studying Indian and western culture over four decades now. Today, his research programme is recognized as a distinct domain called “Comparative Science of Cultures”. It emerged from a question he posed to Asian intellectuals in 1985: Would the world look different, if we looked it our way?

Balagangadhara’s explorations into understanding the West over a period of four decades, have started to radically alter how Indians describe their being-in-the-world, and their past. Balagangadhara’s thought, one could also claim, has now made it difficult for the West to continue with its propensity to universalize or claim as facts, its experience of other cultures from its own historically and theologically rooted contexts.

This research programme throws new light on the problematic descriptions of India in social sciences and humanities. Over a period of time the research that has emerged out this framework has taken questions from various domains from history, politics, sociology, anthropology, Ethics, law, psychology and so on, analyzed the facticity of their underlying assumptions, and found them to be subjective, neither true nor false, but not based on empirical observations for sure. There have been attempts in these studies to show that the conceptual categories used in these domains are a result of unthinking borrowing from West’s description of India’s culture based on their own experiences rooted in their own theological and social contexts. These studies not only show that India’s intellectual world today is a Christian world, but also make an attempt to describe the nature of western culture that has been shaped by Christianity.

Prof. Balagangadhara explains in his books and papers —

“colonialism is not merely about conquering territories, ruling over people and extracting revenues. It is a far more inhuman process, involving violence of all sorts: from the purely physical to the purely psychic. Colonialism alters the way we look at the world and, with sheer violence, displaces native ways of experiencing the world.”

Subservient from being colonized, and further weighed down by the scientific, technological, economic, and military weight of Western culture, Indians have internalized these Western descriptions to such an extent that even their experience of the world is colored by these structures which have no real existence in facts, this colonial consciousness.

This research program sets out to look beyond the screen of the colonial consciousness and attempts to find new ways and terms to document empirical observations from social and cultural aspects of Indian civilization. In the process, it reveals new insights into a range of issues like — unfounded dominance of the language of social justice in description of our society, problematic notions of secularism, issues with literature and public intellectuals who are found to have no access to their own experience but writing or speaking from a world that that is shaped by colonial consciousness, problems with intercultural translations, etc. The research could provide guidance on how to reflect on issues like the recent Sabarimala judgment. In addition, it asks basic questions like — Do we really have caste system? Do we understand what Varna or Varna Sankara means? Do we really understand Manu, who has been portrayed as the greatest oppressor that the world has seen so far? How do we even look at stories of Aryan migration? And this list can get quite long.

Well known books from the school include — The Heathen in his Blindness (1994, Brill) by S.N.Balagangadhara, Rethinking Religion in India: The Colonial Construction of Hinduism (2010, Routledge) by Esther Bloch, Marianne Keppens, and Rajaram Hegde, Reconceptualizing India Studies (2012, OUP) by S.N.Balagangadhara, Europe, India, and the limits of Secularism (2015, OUP) by Jakob De Roover, Against Caste in British Law (2017, Palgrave Pivot) by Prakash Shah, Western Foundations of Caste System (2017, Palgrave MacMillan) by Martin Farek, Dunkin Jalki, Sufiya Pathan and Prakash Shah. Most of the papers from this research can be accessed from individual bibliographies of scholars at their respective university websites. For instance, here is the link to Prof. Balagangadhara’s bibliography at Ghent University (https://biblio.ugent.be/person/801000615302), and at Academia (https://ugent.academia.edu/SNBalagangadhara).

Popular blogs with writings of these scholars include http://www.hipkapi.org and https://witness-to-our-times.org/.

This was first published on Swarajya and has been republished with permission.

The Ineptitude of the Post-Colonials: A response to Dr. Shalini Sharma