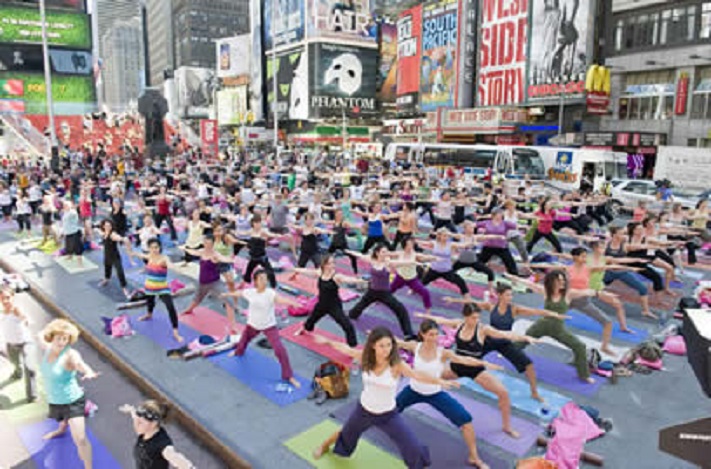 Yoga enthusiasts across the globe are gearing up for International Yoga Day, which will be celebrated on 21 June. To mark the occasion, cities across the world are organizing Yogathons, and offering free classes to those interesting in learning more.

Vancouver’s Burrard Bridge will be closed for a few hours. Even Dubai’s Zabeel Park will welcome Yoga practitioners for Yoga lessons and entertainment. The vibes across the world are mostly positive, except of course the ever present, venom-spewing anti-Hindu media.

As representative samples of the kind of practiced negative coverage by mainstream English media, we can analyze articles from three media outlets: Firstpost, The Guardian and Scroll.

Secularize Yoga because Yoga Has Evolved?

Firstpost.com still does not seem to know the first thing about fair and balanced reportage. Its writers regularly concoct a tasteless hodgepodge of half-truths and an unhealthy dosage of their own prejudices.

Exhibit 1: Sandipan Sharma’s article in Firstpost which makes a shoddy attempt at trying to convince the reader that International Yoga Day would best be served if Yoga were to be considered secular.

The “rationale” for secularizing Yoga is that many countries have come up with their own adaptations of the practice. The article refers to this as Yoga’s evolution (sic). The fact that Mr. Sharma conveniently omits is that countries such as the U.S. and a few Islamic countries have molded Yoga to make it more acceptable to their population adhering to exclusivist faiths.

Many Yoga studios across the U.S. have stripped Yoga’s Sanskrit names and supplanted them with simplified English translations. For example, the ardha chandrasana becomes the half-moon pose; bhujangasana becomes the cobra pose; padmasana becomes the lotus pose or “crisscross applesauce,” and so on.

A common explanation offered by many is that it is difficult to pronounce Sanskrit words for many Americans, and that is fine. But the sinister underlying reason could also be that Christian fundamentalists have found the overt Hinduness of Yoga repugnant and have sought to craft their own rendition. Some have even produced the outlandish idea of “Christian Yoga. Christian or not, the yield of bountiful health dividends by Yoga is too irresistible for many people.

So, guilty Christians hold Yoga classes, where people are taught to recite Bible hymns, as they perform Yogic postures. It would have been helpful if Sandipan Sharma’s piece had given reasons for adaptations of Yoga by adherents of Abrahamic faiths rather than making it sound like it was just a natural progression.

When elements of an ancient practice are modified and/or appropriated to fit into someone’s narrow worldview, it can hardly be called evolution. These adaptations have offered nothing new because they are merely combining Yoga with prayers from Judaism, Islam or Christianity.

The fact is that those who have no objections to Yoga, or, those who are absolutely opposed to it, have unhesitatingly acknowledged its very Hindu roots. It is the duty of every journalist to research what he or she is writing about, and to present the facts without sinister trimming and distortion.

The article attempts to set forth the recent Ruling by California’s 4th District Court of Appeals, as evidence that Yoga is secular. But that was not the issue the Court was deliberating on. The Court held that even though Yoga is considered to have originated from Hinduism, the particular practice offered by the school District did not turn kids into Hindus when they performed the postures.

The Court asserted that while Ashtanga Yoga originated in Hinduism, the public elementary school’s curriculum was not engaging in religious propagation. The Lemon test which requires that the challenged government action must have a secular purpose, does not have primary effect of advancing/inhibiting religion, and does not encourage “entanglement” between government and religion, was applied here.

It was held that Hinduism was not being advanced by the schools’ incorporation of Yoga poses into their curriculum. But Mr. Sharma would have the reader believe that the Court’s judgment was a blow to those who believe that Yoga is rooted in Hinduism. The crux of the ruling is that the purpose of exercises from that particular school District is secular, and nothing more.

This pearl of wisdom flows from Jason Burk from the colonialist The Guardian which once again depicts India’s religious minority as hapless victims at having to accept the terrible idea of Yoga Day celebrations. To his credit, Burk does acknowledge Yoga’s Hindu roots, but that too, is done with a twisted intent to prove a point about hurt feelings of non-Hindus. Funnily enough, Burk provides an example of opposition from none other than Asaduddin Owaisi!

Now, since The Guardian has such an entrenched habit of dragging the 2002 riots into every story on Narendra Modi, it would have been helpful for readers to learn about Owaisi’s blatant and hate-filled anti-Hindu public utterances. The Guardian should also be cognizant of Owaisi’s shameless defense of his brother, Akbaruddin Owaisi’s downright seditious remarks.

It is against the fundamentals of Islam, claims the aggrieved Owaisi. Well that is nothing new. Unfortunately, a lot of rational and wholesome ideas are against the fundamentals of this exclusivist dogma. Nothing can be done about that except for Muslims who need to set their own house in order first. When countries pass mandatory rules, or mark national days for celebration, everyone’s opinion is not taken into account.

Instead of promoting Yoga’s benefits or even merely providing a disinterested commentary, The Guardian resorts to its hallowed tradition of Hinduphobic coverage. If a particular section of the population is not pleased, then it is not up to the rest to quickly reform and apologize. Islamic countries don’t just aggressively promote days rooted in Islamic history, but impose discriminatory laws on their non-Muslim citizens. Morphing everything into a Hindu-Muslim issue seems to be the norm for media outlets like The Guardian when it concerns reportage on Hindus and India.

Ever since its launch, Scroll.in’s single-point agenda seems to be a mindless and sustained trolling of Prime Minister Narendra Modi and his party while simultaneously distorting India’s history and kecking venom against anything Hindus, their traditions, their culture, their holy men and women, and institutions.

And true to its infamy, Ajaz Ashraf does not disappoint. For much of the piece, Ashraf bemoans the commercialization of an ancient practice at the hands of fickle politicians and Yoga Gurus.

But as we read his piece, it becomes abundantly clear that Ashraf does not care a fig leaf about the commercialization of Yoga because throughout his longwinded piece, there is no mention about how the multi-billion dollar industry in the U.S. has appropriated Yoga to make a profit without even stating that Yoga is the result of devoted meditation by enlightened Hindu sages for centuries.

Ajaz also does not mention how self-styled Yoga agents like Deepak Chopra who have amassed staggering wealth from selling Yoga as a non-Hindu/Vedic practice. Deepak Chopra instead likes to think of Yoga as a universal philosophy that predates Hinduism.

But Chopra is not alone. Many have benefited and made big bucks but blithely skipped the part where credit is given to the original source. Is this not brazen commercialization of an ancient practice?

Ashraf the harps quite a bit on the BJP’s motive for going all out for International Yoga Day. The BJP’s motive of promoting Yoga may indeed be to increase its vote share. So what?

The BJP, like any sound political entity, would be interested in attracting supporters. However, failing to highlight what I have briefly discussed earlier in this piece, is disingenuous of the Ajaz. It is obvious that Ajaz Ashraf has no interest in protecting Yoga from being commercialized, but his visceral hatred for BJP and Hinduism, has spurred him to write this insidious piece.

Interestingly, Ashraf, unlike the other two authors discussed above, actually attacks the International Yoga Day celebration by firmly asserting that Yoga is indeed Hindu. He rails against the particular date chosen for the day. Ashraf gives a synopsis of the significance of 21 June 21—that is, the sun shifting from the northern to the southern run. He goes on to claim that instilling pride in the ancient wisdom of Hindu sages is tantamount to inferiority complex. Moreover, according to him, the continuous self-conscious linkage of Yoga and other elements to Hinduism is akin to “drawing boundaries,” and excluding other communities in the process.

Ashraf’s claims are fatuous to say the least. First, no one has drawn boundaries around Yoga to the exclusion of others. The practice of Yogic postures and breathing exercises (Pranayama), unlike monotheistic dogma, does not seek to proselytize anyone. Indeed, some Hindus have been quite perturbed at the misappropriation, and have protested. One such example is the Hindu-American Foundation (HAF) which took strong objection to Yoga’s deracination from Hinduism.

But HAF’s 2008 initiative “Take Back Yoga” was certainly not aimed at asserting exclusive ownership, but rather sought to inform people that Yoga is about self-discovery, about promoting vegetarianism, about achieving Moksha, and is not limited to some artsy stretches and contortions. This is hardly drawing boundaries.

In the academic world, modifications and/or appropriation of an idea/philosophy without due credit to its original source constitutes plagiarism. This behavior would be punishable by expulsion or disciplinary action. It would be very ignoble for Ashraf to presume that an effort to inform people about the origins of a philosophy is tantamount to drawing boundaries and excluding non-Hindus.

On the brighter side

After a very long time, Hinduism is under a radiant spotlight. One would think that the media would give its counterproductive reportage a rest. However, pieces in mainstream media continue to protract non-issues. But on the brighter side, as I mentioned in the beginning, many people the world over have embraced this momentous day, and have gladly acknowledged Yoga’s undeniable Hindu roots.