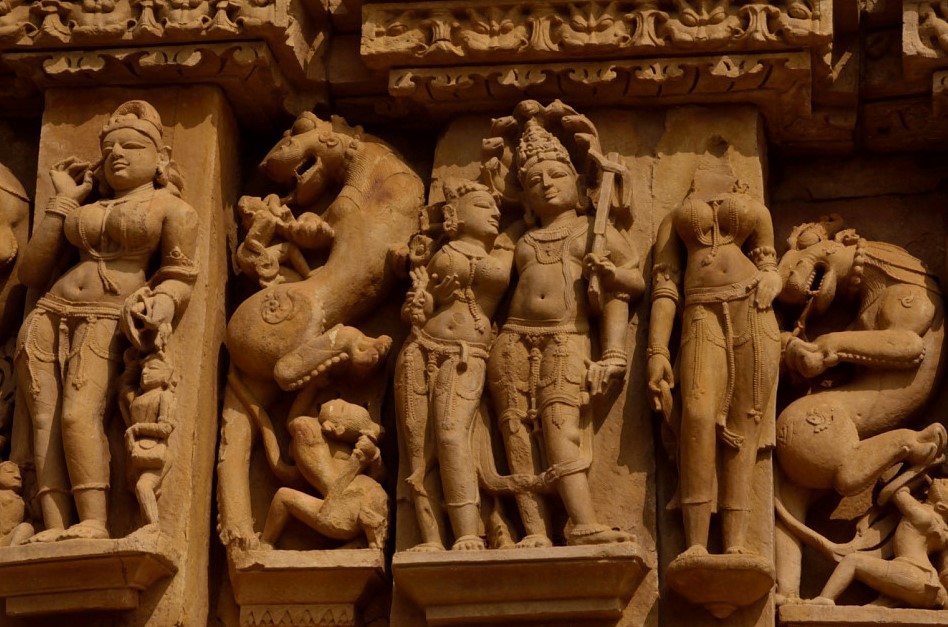 She who lives in the forest of Vatsayana. What a profoundly subtle and sensuous way, to compliment a lover. Enchanting.

But in today’s India, such expressions are rare. The society is torn between the extremes when it comes to topic of sexuality. Caught between the commercialized objectification of sex, on the one hand and the repressive prudery, of Islamic-Christian colonization of the mind, on the other hand, Indian society is veering from one extreme of perversion, debauchery and abuse, to the other extreme of prudery, repression and asinine mockery of traditions.

What was subtle, is now blatant;

What was sacred is now profane;

One narrative thinks to flaunt this sensitive aesthetic, in full public glare, is the definition of liberation. Confusing exhibitionism for feminism, promiscuity for progressiveness. They are more libertines than liberals. And the other narrative strikes down any expression of sexuality, to the extent of denying Kama as a Purushartha of the Dharmic Civilization; denying amazing treasures of literature and beautiful art depictions as in Khajuraho with catchy memes like ‘Kamasutra is a British invention’. One would think that these people are ‘Immaculate (Mis)Conceptions’ and not a result of their parent’s loving procreation!

This combination of extremes has made people, either to chase sexual desire as a headlong hedonistic pursuit or practice repressive prudery, causing an unnecessary and artificial stress. A perfect formula for rape, abuse and sexual crimes.

But was either such extreme, our heritage?

It (my mind) roams always in the forest of lust, it dances on the breast mounds of young women, it jumps around on the branches of desire rapidly, at will all around. O Kapali, O Bhikshu, tie my exceedingly fickle monkey like heart, firmly by devotion. O Siva, O Vibhu, make it subservient to you.

I do not worship your feet, to be saved from the dualities of material existence, Or from the grim tribulations of the Kumbhipaka hell; nor is it to enjoy the soft-skinned beautiful maidens, who reside in the gardens of heaven. I pray, only that I may remember you alone in the core of my heart, birth after birth.

I who sought the breasts of women, of spearing glances,

Dare I think of seeking and attaining your grace?

Rooted out the Krauncha Mountain.

Just the above three examples are enough to illustrate about how Hindu spiritual literature is full of many such allusions of great saints, who recount their attraction towards the sensuality of women and beseeching the god, to wean them away from such temptations. It could be metaphorical or arising from their personal experiences. Arunagirinatha, for example, was a wastrel, philanderer, until at the lowest point of his life Skanda Karthikeya bestowed his grace and an amazing Saint-Composer was born.

A p-lib (Postmodern/Progressive/ Pseudo-secular — liberal) feminist, reading of such literature, would bring out the worst possible take. It would be alleged that the saints of Hinduism were all perverts, who objectified women and then considered them as wily creatures to be avoided.

But is it so? Unlike the ‘one size fits all’ scriptures of Christian or Islamic worldview, Dharma is ever contextual: Kala — Desha — Varna — Ashrama, i.e. Time , Location , Profession and stage in life, all of them matter.

So let us now look at some contexts.

Each one of the text quoted above were written by men in pursuit of moksha. Unlike the prudery of Islamic-Christian cults, our ancestors never hesitated from accepting Kama — desire/sensuality, for it is a Purushartha, a goal as worthy of Moksha or Dharma.

But each of the Purushartha has a specific significance to the context of the individual. A Shaastra meant for Grihastha — Householder and duties meant for them, would never mention anything like avoiding women or sexual intercourse. It is only for those dedicated to Brahmacharya and Moksha that such temperance/celibacy mattered.

Context #2: Kala (Time)
Today pornography is available a click away. Movies are pretty much soft-porn in many of the cases. The density and mobility of population, means the interaction between genders are constant. But was it the case for these people in their time periods?

An extreme example is the story of Rishayasringa, his reaction and involvement when he met the princess Shanta of Anga, he was even unaware of women as a gender. So it can be reasonably said, that there was relatively lesser mingling of sexes.

It is a fact of nature that men are invariably attracted to women and vice versa, to deny that is to deny life itself. But the intent should always be to manage this attraction for the benefit of oneself, others and all the world. So these slokas that advice Mumukshus (seekers of moksha) to turn away from getting involved in a life of sensuality, made eminent sense.

But what about non-mumukshus, the normal householders, who are the majority in any society? There is immense literature for them where there is neither a shunning of women or a degradation of sexuality. Instead, there is a whole branch of literature like Kamasutra, Anangaranga, Ratirahasya, etc. as well as the rich tradition of poetics, which celebrate sexuality. These texts deal with love, man-woman relationship, sexual intimacy, and the duties of a householder. [For example, see the meaningful advice given to the newlyweds in the Kamasutra here]

But what about women, can’t they be mumukshus as well, might shriek the P-lib feminist, who may even brand these texts are sheer Brahmanical patriarchal conspiracy, written by men for men. For that, I give these two women exemplars, each an amazing saint and a wonderful poet, though each chose different life paths.

The Nayanamaar Karaikal Ammaiyar — Punithavathi, immersed in the Bhakthi of Shiva, she found that family life was not suitable for her, when her husband awed by her bhakthi, could only worship her. She chose to give up the body of youth and beauty, sought as boon, a body of a ghoul — ugly and frightful, to be among the Shiva ganas. Shiva Mahadeva gave her that boon, but called her as his own mother — ‘Ammaiye — Amma- Amba’

In one such verse Andal dispenses with metaphors and imagines that she herself in lying in the arms of Krishna, and making love to him. She writes:

“My life will be spared / Only if he will come / To stay for me for one night / If he will enter me, / So as to leave / the imprint of his saffron paste / upon my breasts / Mixing, churning, maddening me inside, / Gathering my swollen ripeness / Spilling nectar, / As my body and blood / Bursts into flower.”

In another poem, Andal says that her voluptuous breasts will swell for the lord alone, and scorns at the idea of making love to mortal beings, comparing that with the sacrificial offering made by Brahmins to Devas, being violated by jackals in the forest. She threatens Manmadha that she rather not live thus:

In fact, women devotees rather had this advantage where they did not need to deny their sexuality, but only direct it towards their deity of worship. So much so that many men, imagined themselves as women, in a Nayaki Bhava, to achieve that type of Bhakthi. Thirumangai Azhwar, for example, imagined himself as Parakala Nayaki and sung to the lord from the viewpoint of being a lovelorn bride.

In the context of spirituality, all Jeevas in this world are like women lovers, yearning for the grace of the lord Paramatma. That is the essence behind the Raas-Leela of Krishna, the Nayaka-Nayaki Bhava. Thereby, our ancestors even made sensuality a mode of spirituality. They managed the mind, turning every impulse of nature and activity of life towards spiritual evolution. But, unfortunately, in our times, such subtlety, nuance, the ability to appreciate this beautiful thing of nature, is fast becoming an endangered thing.

Those who are incapable of any such appreciation, walk around as the champions of sexual freedom. Their greatest ally are the Abrahamic radicals who apply the most extreme form of repression and end up in all sorts of perversions and abuse (Ex. Widespread sexual abuse in Church)

So the question is whether Hindu society is going to continue down the paths of either extremes, torn between them, or remember that there is a third path, that of their ancestors, where the sex is neither taboo nor reckless, neither suppressed nor promoted, but a sensitive and valued experience, celebrated, cherished and appreciated in the suitable contexts, while restrained and avoided in unsuitable ones.

Kama is Neither Prudery nor Promiscuity, but a Purushartha.

The place of Kāma among other Puruṣārthas: A Sanskrit Poetics perspective

A Week with the Purusharthas