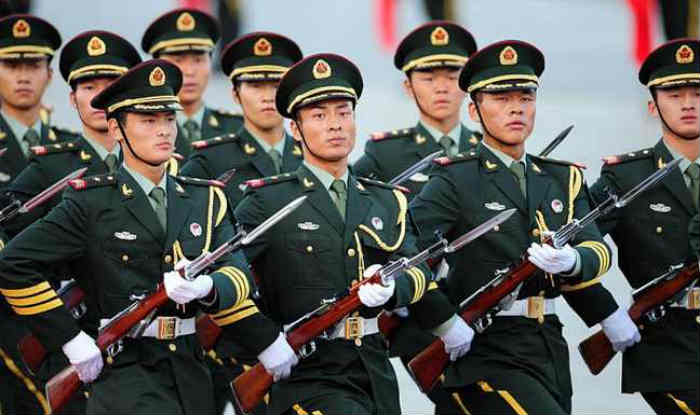 It is no secret that China has been asserting its dominance for the last 50 years on land, sea and even in space.  Every one of its actions have been executed with machine like precision, its modus operandi being that it disputes or blatantly disregards internationally-agreed upon borders, cherry picks treaties that coincide with its agenda, encroaches on foreign territory by building infrastructure in disputed areas and then claims its rights by citing evidence of that very same infrastructure it built, thereby refuting legitimate claims of other nations.  The past and current actions of China with regard to claiming Tibet, aggressive posturing in the South China Sea, China’s race to space programs all attest to these methods of Chinese aggression.
In its latest stand-off with India, China is once more flexing its muscles and creating a flash point.  India and China are currently facing off in disputed Bhutanese territory, in a region, which is very strategic to India.  This territory is near the tri junction area, i.e., the meeting point of Tibet (China) to the north, Bhutan to the east and Sikkim to the west.  An understanding of the local geography and topography is paramount for the gravity of the situation to sink in so that India can devise a long-term military offensive and defensive strategy.   The map below (Map 1) gives a birds-eye-view of the location of the current standoff: Where is the Current Standoff Actually Taking Place?

There is much confusion as to the location of the current standoff, especially within media reports. It is sometimes reported that the standoff is in Sikkim or in Doklam, etc. but the exact location is never explicitly mentioned in reports.  The actual standoff is taking place in the Doklam plateau region, which is not in Indian territory, but in western Bhutan; however, China claims that this plateau is part of Tibet and thus rightfully theirs.  Part of the confusion that surrounds the location is in the name, as many areas in the region have similar sounding names.   For example, there is Dhoka La, Doklam and the Doklam Plateau (the differences are noted below) – thus you can see where the confusion probably stems from.

As I have mentioned, the current standoff is in Bhutanese territory (Doklam Plateau), which is clearly south of the internationally recognized tri-junction at Bantang La (refer to Map. 2 – the meeting point of India, China, and Bhutan).  The narrow plateau, highlighted in blue, between Sikkim to the west and the Chumbi Valley to the east and north, is called the Doklam Plateau and is clearly not in Chinese territory.  Chumbi Valley is very narrow and steep and can be easily fired on, if necessary, by Indian troops stationed on the mountain ridges that border Sikkim and look down onto the valley.  Thus the valley is not suited to station troops of the PLA (People’s Liberation Army).  It is of utmost importance that Indian forces keep Chinese troops at bay and out of the plateau as the area could be used by the Chinese to mount an attack on the strategic Siliguri Corridor of India.  The Siliguri corridor (Map. 1) is the only access way for India to reach its north-eastern states of Assam, Meghalaya, Manipur, Tripura, and Mizoram and thus is of critical importance. Map 2 – shows the area of the Doklam Plateau in blue, on the western border of India and the eastern border of Bhutan and South of Tibet. This is the prize that the Chinese dragon is eying.

However, ‘Doklam’ in the north (see Map. 3), is also in Bhutan, although the Chinese have slowly but surely encroached this area and see it as part of Tibet.  The Doklam Plateau is 30 kilometers south of ‘Doklam’ and is clearly recognized as part of Bhutanese territory internationally.  It is on the Dholkam Plateau where the Chinese snake is slowly creeping in.  Hence this aggressive posturing by China doesn’t bode well for India. This standoff commenced when the Chinese tried to extend some of their roads further south into the Dhoklam Plateau.   The Chinese claim that Gymochen (Map. 4) is the tri-junction area and not Bantang La, and this justifies their claim to the Dhoklam plateau.  The Chinese have justified their claim by citing the Convention of 1890 between the British and Tibet, as the legal basis for their claim over the territory. The Convention of 1890, cites that the tri-junction is at “Mount Gipmochi” (which is further south of Tibet, as shown in Map 4) as opposed to Bantang La. However, the location of Gipmochi itself is not explicitly clear from existing documents. However, China has conveniently claimed that Gipmochi is indeed Gymochen, but the description in the treaty of Gipmochi does not at all match the topography of Gymochen. Despite China’s glaringly false claims, you might still be wondering why India is facing off with China in Bhutanese territory. This is because India and Bhutan signed the India-Bhutan Friendship Treaty in 2007. India, in an attempt to defend Bhutanese territory as per the agreement, invoked Article 2 of the treaty, which states that “Neither Government shall allow the use of its territory for activities harmful to the national security and interest of the other.” This has been the basis for Indian presence in this standoff.
In 1996, during the 10th round of border negotiations between China and Bhutan, the former offered to exchange the Pasamlung and Jakarlung valleys which have an area of 495 sq km for Sinchulumpa, Dramana, and Shakhtoe (western Bhutan which has an area of about 269 sq km and which encompasses Doklam Plateau).  Bhutan did not accept this offer.  This would have been a sweetheart deal for China as it would give them the strategic Doklam Plateau in exchange for relatively unimportant valleys (for the Chinese anyway) in the north of Bhutan.  They wanted the strategic Doklam Plateau, as this borders Sikkim, overlooks the Siliguri Corridor (One of India’s vulnerable chicken necks) and can be fired on by artillery from the Doklam plateau.   This is why the Chinese are so keen on getting their hands on the Doklam plateau.  Already, China has claimed more than 10% of Bhutanese territory over the years.  In addition to this, Bhutan, in 2007, essentially gave up claim to Kulakangri, the tallest mountain in Bhutan as a goodwill gesture to China.  China, however, took it as a matter of entitlement and gave no response to the Bhutanese. China today wields control deep inside internationally recognized territories of Bhutan and has been slowly creeping further south.
According to Bhutan, both Doklam and Doklam Plateau belong to Bhutan. According to the Chinese (refer map 5) they claim a vast area that encompasses Doklam and Doklam Plateau and everything in between connecting them both.  Besides, China claims strategic points in Bhutan, enveloping and clasping it, thereby getting access to vulnerable points in India.  Doklam Plateau will give China access to Sikkim and the Siliguri corridor, while territory claims in eastern Bhutan will give China easy access to Arunachal Pradesh, increasing India’s vulnerability even more. China has built many border posts in Bhutanese territories and has slowly pushed them farther into Bhutan’s territory from all sides. Much of Doklam Plateau is controlled by the Chinese forces as they have built roads in some parts of the plateau. From Map 6, you can see the extent of the roads in Bhutan that the Chinese have already built in classic Chinese aggressive operating style. One example of China’s slow but steady encroachment into Bhutanese territory can be seen in two satellite images of the same location of a road leading to a border post, one in 2005 and then 11 years later. In those 11 years, the road and border post went over 1.7 km deeper into its neighbor’s territory. The current standoff was the result of China trying to extend their roads to get full control of the Doklam plateau. Just because India stopped the Chinese from encroaching more into the plateau does not mean that this standoff is a win for India.  To regain some semblance of control, India must go across the international border into China’s Chumbi Valley thereby cutting PLA troop supply lines (as indicated in Map 4). This would make the PLA troops in Doklam Plateau isolated and would make them have to surrender and retreat. Then India could withdraw from Chumbi and gain full control of Doklam Plateau, and even Doklam to the north.
There are two main reasons for China’s successful takeover of territories in India and Bhutan.  Firstly, the lay of the land on the Chinese side gives them the edge, as it is much easier to access these remote border territories from the Tibetan side. Secondly, China has invested much more into the development of transportation infrastructure in these areas than either India or Bhutan.   China, as Map 6 shows, is light-years ahead in building durable roads in these terrains with alternate routes for back up, all of which help China solidify their claims to the land and help with mobilization of troops and supplies.
My own road trips within Uttarakhand have demonstrated to me the appalling state of Indian roads in less inaccessible terrain than the Doklam region – so you can imagine that state of affairs further north along the Indian borders. En route to Badrinath for example, the roads lack any controlled drainage in mountain terrain and are carved away every year during the monsoons leaving pothole-ridden roads covered in loose gravel.
And this was the state of the very critical artery road on the way to Badrinath leading up to the strategic Mana Pass at the Indo-Chinese border.
With Bhutan’s inability set up an effective resistance, the onus is on India to protect India’s interests while safeguarding Bhutan’s territories.  China’s invasion of Tibet has increased India’s vulnerability and this is probably one of the first in the series of provocations that are yet to come.  India needs to also show strength by taking appropriate action to ensure a Chinese retreat from Bhutanese soil, not just in Dolkam Plateau, but also in all other border areas.  India then should provide Bhutan with military and infrastructure support to secure its borders.  This is a tall order, especially given the terrain and India’s passive stance when it comes to securing borders within its control let alone the borders of a friendly neighbor.  With each passing day, China is nibbling away territory, engulfing Bhutan entirely.  Perhaps it is time for India to show its offensive and aggressive side, if it indeed has one.  China needs to understand that India has a zero tolerance policy for Chinese aggressions along its borders.  There is no other way!