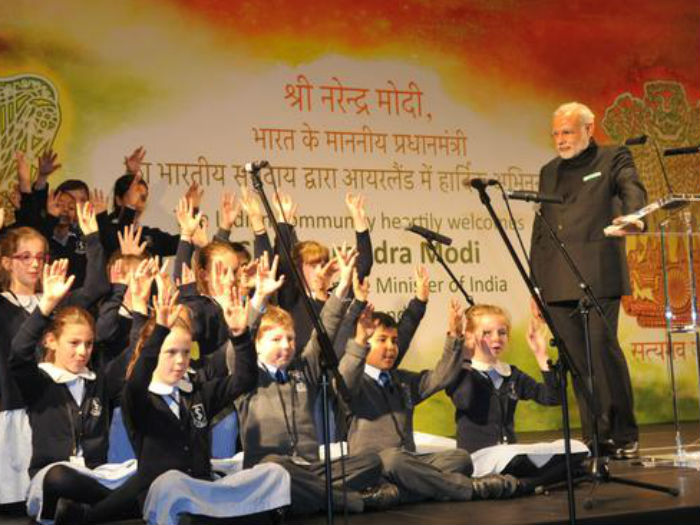 With a desire to unlock the meanings of Sanskrit phrases often quoted by India’s Prime Minister Narendara Modi, in Part I of this article series, I had provided some background – what is Sanskrit, what are the Upaniśads, Pura̅ṇas and itiha̅sas, etc. In Part II, I had explained two phrases: Satyameva Jayate and Ahimsa̅ Paramo Dharmaḥ.

In this article, let us examine two more phrases quoted by the Prime Minister:

If one visits any ashram (i.e. a place of learning Sana̟tana Dharma, not the many churches that are masquerading as “ashrams”), classes will typically end with the following prayer (1):

May all (living beings) live happily, may (they) be free of disease.  May all be blessed with auspiciousness. May (they) never experience sorrow.

This is a simple yet powerful prayer that expresses the desire that all beings all over the known worlds and unknown worlds live peacefully.  The source of this stotra is not known (2; 3).  The prayer reinforces our understanding of the universal need for life free of agony, and neutralizes any negative emotions we accumulate.  That is also the reason for the popularity of this prayer – it is sung in many temples, especially in Northern India.  Many musicians and composers have tuned this prayer to contemporary music, such as this.

Typically, a prayer calls out the deity such as Saraswati or Krishna.  In “sarve bhavantu”, there is no specific mention of a deity.  Hence, this stotra can appeal to people universally.  Additionally, Christianity and Islam, for example, claim that their “God” is the only True God (4), and all other “Gods” are false Gods (5) (6) (7) (8).  This is why such religions are termed as “Exclusive”, i.e. (a) the religion excludes their “benefits” from all those who aren’t adherents.  (b) the religion condemns non-adherents to eternal damnation/hell (9).  Such an outlook shocks many Hindus because they have never been told by their elders or scriptures that followers of other religions like Christianity are going to Hell, or that Hinduism is the only real religion.  Being naive in these matters, these Hindus believe that all other religions are like Hinduism, only with different names and forms!

So, for followers of such Abrahamic religions, a prayer that is not a “specific-god-specific” might appeal, God permitting! Narendra Modi, being a practical man, visualizes a need for such universal prayers to achieve his heartfelt vision for a balanced world ecosystem.

This phrase comes from the first verse of the Īsha̅va̅sya Upaniśad, an Upaniśad which gets its name from its very first words:

All this – whatsoever moves on this world – is covered by Ishwara.  Protect (yourself) through letting go (being dispassionate).  Do not covet anybody’s wealth (or, do not covet – for whose is wealth).

We need to take a short lesson on the core vision of Sana̟tana Dharma or the message of the Upaniśads.  The source of this universe is “Ishwara”.  Ask any Hindu where “God” is, and the answer would be “Where is God not?”  That is, Ishwara is all pervasive.  Every object such as a pot, needs a maker (potmaker) and material (clay). Now, replace ‘pot’ by the ‘universe’.  Ishwara is the maker of the universe, or Nimitta ka̅ran̟am. In addition, Ishwara is also the “material cause”, or upa̅da̅na ka̅ran̟am, the material of which the universe is made.  An example to visualize this bold idea unique to Sanatana Dharma is that of a spider mentioned by the Munḍaka Upaniśad (10).  The spider creates the web with the material it spins out of itself.  Since any end-product (such as pot) is never separate from the material (such as clay), and since the material (clay) is Ishwara, this results in the vision of Ishwara being all-pervasive.

For comparison, Christianity uses the word “creation” for this universe, which is created by “God”, and a universe which is “separate” from “God”.  The material for the creation is not found anywhere and hence “creation from nothing” is often implied.  The Upaniśad model views the universe as non-separate from Ishwara.  Hence, we cannot use the word “creation” to express the Dharma worldview of this Universe.  A better word to reflect this process is “manifestation”.  Finally, a̅tma̅, the Self, cannot be separate from this Ishwara, so Ishwara and A̅tma̅ are essentially identical.  These are the reasons why “Ishwara” of Sana̅tana Dharma is not the “God” of Christianity.

Let us summarize the above discussion:

Now, let us get back to the verse.  In Adi Shankaracarya’s commentary of this verse (13) (14), he says that “Atma – you – is the self of everything in this world (a topic of all Upaniśads, which is outside the scope of this article), so what is there separate from you to covet?”

The Brihadaaranyaka Upaniśad narrates a beautiful story.  Yajnavalkya, a prosperous householder decides to walk away from it all for apparently no reason!  Questioned by his intelligent wife Maitreyi, if what he is now seeking would give him “greater happiness” than the prosperity he was already enjoying as a householder, his answer was an emphatic affirmative and went on to teach her (15) (16) (17):

One loves one’s husband not for the sake of the husband;

One loves one’s husband for the sake of the pleased self.

Basic material possessions are essential for this body to survive.  However, an error arises when we make the mistake of equating our contentment with possessions. An insecure person will hoard.  A person who recognizes security as his or her own nature will naturally give.  It is this vision that has made India a country that has not attempted or desired to aggressively occupy the rest of the world.

What does our Prime Minister mean by this statement? He probably implies: “Do not take yourself to be limited or insecure.  What does an individual gain by being corrupt?  Unleash your full potential.  What is there to fear?  Consume less and contribute more.  Let us boldly use the sanctity given to us to address the challenges we have.” It would do good, if Indians reflect on this message and imbibe it in their lives.

In the succeeding articles, I will continue unfolding more phrases from the seminal texts of Sanātana Dharmaḥ that Narendra Modi likes to quote.

The author would like to thank Mary Amboji for her pointers to Biblical references.