Art Of Living and Vultures around it 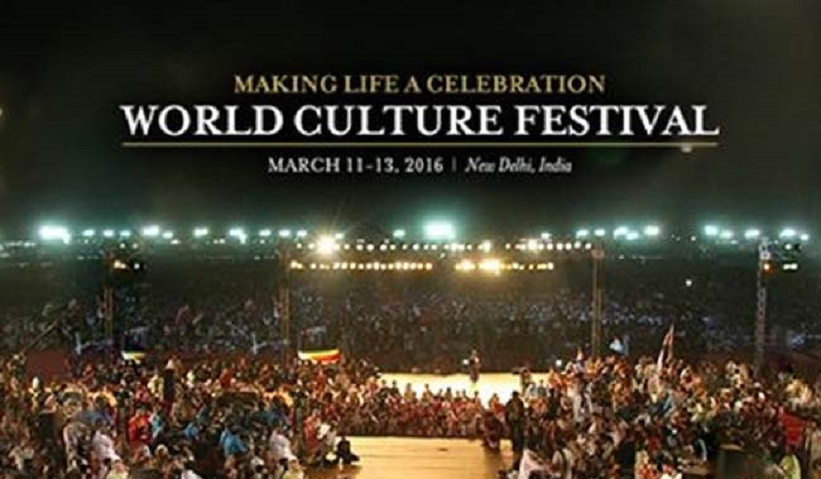 It started in 2010. Five thousand volunteers daily came together and worked hard for rejuvenating the forgotten river Yamuna. No one came to help them. They named that movement as “Meri Dilli, Meri Yamuna”.  They removed 512 tonnes of garbage from the same river. No one was in the picture that time. Now in 2016, in that same place Art Of Living announced that it will be organising “World Culture Festival” on March 11th, 12th and 13th and that too for 4 hours a day.

And this caught everyone’s attention. Suddenly Environmentalists, Environment Lovers, savers, worshippers appeared from all the directions and started their chest beating program in national media saying “Sri Sri Ravishankar Guruji is spoiling Yamuna river and that whole art of living is spoiling the environment near Yamuna river” etc.. etc.

I really don’t know where these rats were hiding from 2010? And why this outrage now? To know this secret you’ve to see this – The pride of World Culture Festival is:

One stage = 7 acres, whole program in 1000 acres, estimated participation = 35lakh and plus so many elites from all over the world and crores on money spent on this program. In this 3 days worldwide Art Of Living centres will  be celebrating, International media cover up, and literally whole world will be looking curiously at India.

And as far as I know there is no such cultural happened anywhere in any part of the world. As they say “A big thing has thousand hindrances” now some vultures are waiting to stop this at any cost.

“Ravishankar Guruji and team are polluting Yamuna and cutting off hundreds of trees” is itself a lame argument by NGT (National Green Tribunal). You just won’t believe if I say this – NGT was started by Sonia Gandhi led congress in 2010. And its main objective is to save environment. But unfortunately we don’t get much work from them. More than a river, Yamuna was a place of garbage dumping and a heaven for unlawful activities. Where were this NGT at that time? Until Art Of Living took over the responsibility of Yamuna cleaning, these buggers weren’t aware that there is something called Yamuna River in that garbage area.

After 5 years of hard work of AOL volunteers now these NGT roaches woke up. No, not for work but for collecting fine. If you look at the Yamuna River Bank closely, there is a building called Abdul Fazal Enclave. The NGT is creating  a scene when AOL said they want to conduct World Culture Festival. But when such a big enclave is built within the limits of NGT, they are least bothered.

Do you think AOL’s three days program will cause more harm to the Yamuna  than that Abdul Fazal Enclave? But all of a sudden national media started breaking news that NGT has imposed 5 crore rupees fine and allowed AOL to conduct WCF.  For argument sake if we accept that AOL is polluting the Yamuna , will it compensate the damage a after accepting the 5 crores fine? It shows their intention is only to collect money as much as possible. After all who will reduce fine amount from 120 crores to 5 crores. Hence, it proves something.

As the days are nearing, ‘environment saver’ rats are popping up with the same intention of extorting money from AOL. If you had observed, there is an online petition started by an NGO against WCF saying AOL is planning to encroach all 1000 acres land by constructing some buildings etc. But not even a single sack of concrete was allowed inside the WCF Premises, then where is the point of construction works. Well these are the lies circulating from the mouth of such missionary funded NGO’s.

If you know Delhi properly, you must be aware of a place called Asian Games Village. It is constructed in 35 acres land. The basic idea behind that was to provide hospitality for international athletes who came to Delhi for participating in events like the Commonwealth games. Now the same Asian Games Village is in the hands of some real estate agents. Do you think AOL’s 3 days program will affect the environment more than that 35 acres village? Surprisingly no environmentalist is shouting against the Asian Games Village because those real estate agents have given them many flats to be silent.

From the past two, three days the mainstream media is creating an outrage that AOL is using Indian Army to build bridges in WCF and for other security purposes. But to clarify the AOL didn’t invite the army . It was Delhi police who sought the help from the Army as they found it very risky to mange the whole program alone. If you can recall your memory, in 2005 from January 21st to 23rd Evangelist Benny Hinn came to Bangalore for his “Festival of Blessings” in which many people were converted to Christianity openly.

And the interesting part here is the program took place in Jakkur Airport. I was really shocked to know that the whole aerodrome was completely shut down for three days just for a missionary like Benny Hinn. How can you just stop Indian Air force planes from functioning for three days?

And all these tactics are clearly explained in Rajiv Malhotra’s “Breaking India” book. Just relate few developments happening from past one month. Shani temple issue, Ayyappa Swami temple issue,  are clear examples of how Hindu traditions are being harmed by these leftists and so called environmentalists.  Now NGT has given green signal for WCF only after giving 5 crores.  If AOL “satisfies” them it will be less of “Culture Festival” and more of a “Vulture Festival”. And this is how it is. Incredible India.

The Case Against AOL: A Case of Malicious Prosecution