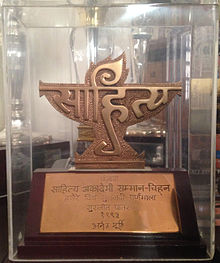 What is the common between dismissed IPS officer Sanjiv Bhatt, self-styled activist Teesta Setalvad and the writers who have relinquished Sahitya Akademi Awards or quit the Akademi? They all indulged in a well-orchestrated campaign against Prime Minister Narendra Modi, by spreading canards, which ultimately aims at defaming India.

Let’s cut straight to the award-returnee writers. When I was writing the piece, the award wapsi score reached 33. Five more writers have quit the Sahitya Akademi. Some more will follow suit.

Who are those writers? Leading the pack of award wapsi writers is elite fiction writer Nayantara Sahgal, the niece of Jawaharlal Nehru. Hindi poet Ashok Vajpeyi, who returned the Sahitya Akademi Award, is known as a power broker in literary circle. It is an open secret that Vajpeyi is slavishly loyal to the Nehru–Gandhi family. Not to forget that it was Ashok Vajpeyi who had hosted the World Poetry Festival in December, 1984 when Bhopal was reeling under gas tragedy. When being asked, Vajpeyi had shamelessly quipped, “मुर्दो के साथरचनाकार नही मरता.” Uday Prakash, another Hindi poet who relinquished the Akademi award, is an active member of the CPM. Hindi poet Manglesh Dabral, who returned the Sahitya Akademi Award, has been associated with Janwadi Lekhak Sangh, a Left platform. Malayalam novelist Sarah Joseph, who returned the Akademi award, had contested the 2014 elections from Arvind Kejriwal’s AAP. Akademi Award returnee writer Ganesh Devy’s NGO Bhasha has reportedly received dubious foreign funding to the tune of Rs 12 crore. Malayalam poet K Sachidanandan and Kannada  poet Aravind Malagatti — who quit the Sahitya Akademi — are known Hindu bashers.

All these writers who relinquished the Sahitya Akademi Awards or quit the Akademi allege that there is an “assault on right to both life and freedom of expression” under the Central Government led by Prime Minister Narendra Modi. They further allege that “an atmosphere of intolerance” has been created across the country under the Modi regime. They cited the lynching of a Muslim man by a Hindu mob at Dadri in western Uttar Pradesh, the recent murder of rationalist MM Kalburgi in Karnataka and the August 2013 killing of N Dabholkar, another rationalist, in Maharashtra as cases in point. But their arguments ring hollow.

First things first. All three incidents are unfortunate and should be condemned with strongest possible terms. But the Central Government has nothing to do with these incidents. Second, law and order is a state subject. It would have been wise for the writers to approach the respective Chief Ministers or take up the matter with the respective Governors. Third, the two states – UP and Karnataka — where the two recent unfortunate incidents took place are being ruled by Samajwadi Party and Congress respectively. The other unfortunate incident had taken place in Maharashtra when the Congress-NCP combine was in power. But the ‘intelligent’ writers choose to rant the Prime Minister to score brownie points.

The hypocrisy of these writers is unselfconscious. India saw anti-Sikh pogrom in 1984 and National Emergency in 1975-76 under the Congress rule. But majority of them received the Sahitya Akademi Awards under the Congress regime and more particularly Nayantara Sahgal had received the award two years after 10,000 innocent Sikhs were slaughtered by the Congress goons under her nephew Rajiv Gandhi’s watch. None of these writers fought against the Emergency and went to jail.

These are the people who are club members of Congress-Left combine. They are running a hate campaign against Prime Minister Narendra Modi. They are desperate to dislodge an elected Prime Minister. These elites can’t see the rise of a humble chaiwala occupying the Prime Minister’s post.

Lies have been the hallmark of this anti-Modi brigade. Ever since Narendra Modi took the reins of the country, these people have been continuously raking up the chiche that minorities are not safe under Modi. But the fact of the matter is that in a nation where PM Modi’s development agenda ‘Sabka Saath, Sabka Vikas’ (Together with all, Development for all) sans partisan politics, these forces don’t want this to happen because it is badly hurting their constituency. Under the Modi regime these people are scared of their own existence. They are scared of losing their perks.

Joining the shared campaign of these award wapasi writers are a section of main stream media (MSM as they are popularly known as) and a battery of sponsored NGOs. They all are vehemently opposed to the concept of ‘Nation First’.

By returning the Sahitya Akademi Award and quitting the Akademi for obvious political reasons, these writers have thoroughly exposed themselves.

The award wapasi shame has laid bare the dark under belly of the Sahitya Akademi. Needless to say that theAkademi is one of the many cultural institutions which the Congress systematically killed in its tenure. In the last one decade, ‪Sahitya Akademi  has been hijacked by Congress supporters, left jhoolawalas, overground Maoists, overzealous secularists and even rabid anti-nationals.

It is indeed painful to see that an institution which is supposed to be dedicated for promoting Indian literature is being ruled the roost by coterie. The Sahitya Akademi has become a place where awards are being fixed and the lobbying by some writers could even put the politicians to shame. A rampant scandal is brewing in the Sahitya Akademi which needs a deeper investigation. It is time the government recast the Akademi.