Beyond Belief: We Are Not All the Same 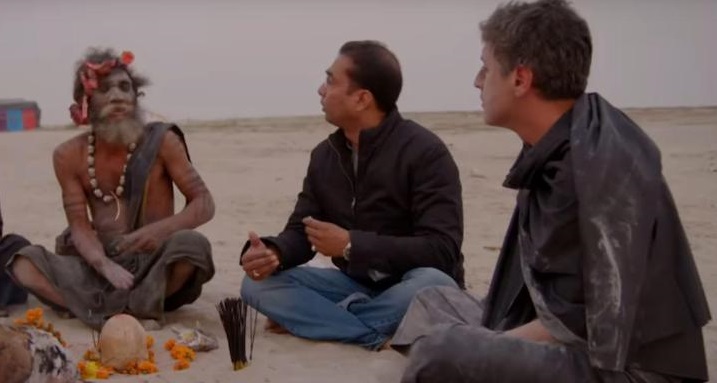 Believer, the recent documentary by Reza Aslan, succeeded in creating quite a buzz among Hindus all over the world. Most people took umbrage over the fact that Aslan zeroed in on a fringe community of ‘believers’ as if they were representative of Hinduism. Aslan was sly enough to acknowledge that the Aghori are a fringe group but that’s as good as saying nothing at all because in the ‘religion’ called Hinduism being a fringe group is quite the norm.

How justified are Hindus, intellectually speaking, in our objections to Aslan’s representation of our so-called religion? Not very, I’m afraid. This is because the problem we are contending with is a conceptual one first and foremost. It has little to do with the facts that one drums up in support of this framework. If Hindus are willing to swallow the conceptual framework thrust upon us by Aslan, then we have no solid ground to stand upon when disputing the facts.

How do we look at the world and who taught us to look at it this way? The Vedic seers did not cram a set of beliefs down our throats. Instead they made unparalleled discoveries with respect to what is Real and developed ways to access the Real, which they labeled as ‘Sat’. The key to lasting happiness lay in self-inquiry that provides access to the Real. Everyone can strive to be happy by following different paths to happiness based on their individual capacities and differences.

Meanwhile in the deserts of the Middle East there was another group of people that saw the world very differently. They claimed – as a factual truth – that there is an entity called God, who is the Creator of the world and who governs the world by his will. This God is the true God and if you don’t want to face dire consequences, you had better represent God’s truth the right way.

Notice carefully that there is no conceptual correspondence between the above two depictions of the world. One culture speaks about an entity called God, the other culture speaks of something called Sat. The concept of Sat has nothing to do with God or even Truth. Rather it relates to what is Real and invites you to discover this for yourself. The domain for the study of God is called theology. The domain for the study of Sat belongs more in the field of psychology or physics, but is ultimately even beyond the scope of these disciplines. Thus, there is no justification to lump Hindu discoveries along with religious studies. These discoveries are a form of knowledge, which is not something that can be said about a bald claim that there is a God in the heavens.

When the Europeans began their scholarship on India, needless to say, their imagination was constrained by centuries of religious indoctrination so that they were compelled to believe that all cultures had religion. They set to work looking for the ‘holy’ books of the Hindus in an effort to understand the ‘religion’ that was Hinduism. Slowly but surely a picture of Hinduism began to emerge that was based on the conceptual framework of Christianity. It is this picture that Hindus themselves have come to accept. In this framework, the Indian traditions are not seen as a variety of pathways to flourish in life, instead they are seen as a set of dogmas and doctrines. The Hindu standards of knowledge and ignorance have given way to Christian standards of good and evil. Pragmatic solutions to the human predicament are recast in terms of belief systems. The holistic Hindu world is now split into two realms – the spiritual and the material based upon the Abrahamic model.

The framework of religion does serious injustice to the richness and depth of Hindu thought. From within this framework our traditions can only appear ridiculous. Remember, people who have grown up within Abrahamic cultures are inured to seeing the world in terms of Truth and belief systems. The very title of Believer is an indication of the importance of belief in the Abrahamic religions. Of course, Hindus rely on beliefs too. As long as we have a mind we will have thoughts and as long as we have thoughts we will form beliefs. In the Indian traditions this is acknowledged as a human predicament, but in the final analysis, beliefs are meant to be overcome, not clung on to for dear life.

Meanwhile, our traditions developed ways of coping with this human predicament. They devised ways of shaping our beliefs so that they may be conducive to lasting happiness – hence the importance of Smriti or devices that go towards forging the contents of the mind. Our gods, our devotion, our fantastical beings all serve towards this end. They have nothing to do with the kind of God envisaged by the Abrahamic religions. They are stories, they are learning devices, they are means of social development and interaction, and they are means of finding happiness. They are most definitely not a theology of any kind and are not presented as the Truth.

The problem of seeing the world through the prism of religion is much more insidious that we can imagine. For deeper insight into the issues at stake, the works of S.N. Balagangadhara are an invaluable resource. He provides a meticulous account of western culture that has primarily been shaped by Christianity. He shows how ideas from Christianity have seeped into the social sciences and masquerade as valid knowledge. The problem is not that the ideas in the social sciences are based on Christianity or whether they come from aliens in Mars. The problem is – have they produced knowledge? The West has bedazzled us with the hard sciences and rightly so. But in the bargain it has snuck in the highly dubious social sciences including the domain of religious studies. Indians have fallen for the social sciences hook, line and sinker without ever questioning whether they have any problem-solving capacity relevant to us. It’s time we began to question what we accept as knowledge and to develop alternative frameworks to challenge those currently in circulation.

What conceptual framework do we adopt when we deny that the Aghoris do not ‘really’ represent the religion called Hinduism? From within this framework can we honestly say that the Vedas ‘really’ represent so-called Hinduism when in all honesty you would have to concede that Vedic scholars are also a fringe group? Surely we can’t be cherry-picking our facts based on miffed feelings just because Aslan’s representation of Hindus does not measure up to the pristine framework of the Abrahamic model that we too now adopt?

This is precisely what we are forced to do if we accept the religious model. Otherwise it makes absolutely no sense to take the very strength of our traditions, its vibrant diversity, and act like it is something to be apologetic about. Where do we draw the line anyway? Why isn’t it weird that some people believe in Ganesha or Krishna as well? Should this not be fair game for the current crop of popular atheist scholars? These are the pitfalls of looking at the world through the religious framework. Deeply entrenched within this framework is the idea that human practices are based on beliefs. There is no evidence in the sciences to corroborate this claim, yet we accept it as if it were the gospel truth simply because Christian scholarship (disguised as secular knowledge in the social sciences) proclaims it to be the case. The Indian traditions place more of a stress on ‘action knowledge’ without linking actions to beliefs. Once again the writings of S.N. Balagangadhara are a vital resource on this theme and can form the foundation of developing fresh ways to study human behavior.

Aslan’s trump card is that he went for the Aghoris because of their rejection of the so-called caste system. Never mind that Aslan could have found a similar sentiment echoed in innumerable other places in Hindu thought, how valid is this western, one-size-fits-all, model implicit in Aslan’s claim? A simple-minded proclamation that God created everyone equal does little to promote justice in the world. The idea that a human life is best lived in accordance with one’s predispositions and capacities provides a valuable alternative framework to understand how best individuals and societies can flourish. Of course, this idea has been demonized to represent an evil ‘caste system’ so that any genuine inquiry into the matter is rendered impossible. All we are permitted to do is to repeat after our colonial masters that India has forever been in the grips of an evil caste system.

By all means, let us put our traditions to the test as well. Let us question whether Hindus have produced any knowledge. If the Hindus have truly produced knowledge it should be possible to state what it is in 21st century terminology. It may well turn out that the knowledge produced by the Indian traditions can be of use to everyone all over the world, in all aspect of our daily lives, in our political and social lives, in our economic and artistic lives, in our academic lives, for our health and well-being, at work and at home. It is an injustice to treat it is as some mumbo-jumbo confined to a conjured-up realm of spirituality bequeathed to us by the Abrahamic religions.

Divya Jhingran studied western philosophy as well as theory and practice in the Indian traditions. She is co-author (with S.N. Balagangadhara) of Do All Roads Lead to Jerusalem and As Others See Us: A Conversation on Cultural Differences. She lives in New York.