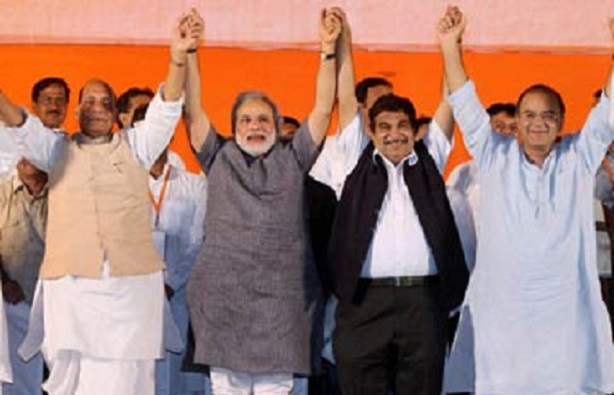 About two years ago, the Bharatiya Janata Party was not even a serious opposition in the nation’s politics. One of the perceptions was that it was acting like the B-team of the Congress, notably supporting the anti-people Ordinance of the Manmohan Singh government which would have negated a Supreme Court judgement that required convicted lawmakers to quit their seats.

Rahul Gandhi famously tore up that Ordinance, and “the people of India were saved (sic).” The first lesson from the 2015 Bihar elections is this: in just two years the BJP has emerged as the only party with a nationwide character.

The second lesson from Bihar: by any definition, the electoral verdict is not for development or social justice, which usually is the plank of Left-of-the-centre parties like the Rashtriya Janata Dal of Lalu Yadav and Janata Dal (United) of Nitish Kumar. It is not even arithmetic. The reason the BJP was comprehensively defeated in Bihar is because it has emerged as the largest party against which all other parties were allied, determined to defeat it. Throughout the course of election campaign, the BJP was attacked as if it was Bihar’s ruling party. This was also the case in Delhi elections last year.

The third lesson from Bihar is this: the BJP must make a serious attempt to become the nation’s most inclusive party with clear republicanism rooted in the Indian constitution. It is shameful that politicians continue to think that to be inclusive is to be subservient to castes and religious groups like Muslims.

Most importantly, the BJP must realise the power of Delhi’s media mafia. Journalists are partisans and media houses serve as branches of political parties. To challenge the brute partisanship of journalists, the BJP needs to appoint not less than two dozen national spokespersons. Each spokesperson must be a subject matter expert: one for the Uttar Pradesh politics, another for Kerala, others for foreign policy, Assam, rule of law (this is a serious subject), or youth affairs. Spokespersons must be hired from the party ranks or external talent must be recruited. Ensure that 50 percent of them are women.

It also appears that the BJP disbanded its social media team soon after the 2014 elections. It might be the time to recreate a social media think tank at the top of the BJP’s media strategy. Members of such a think tank must not come from the party: they should essentially be those below 40 years of age and with non-political degrees such as MBA, BTech, CA, and the like. People with non-political and non-humanities degrees look at the nation’s needs in a more constructive way than those coming from political backgrounds, or from the Sahitya Akademi.

It is further clear that messaging works in electoral politics. Modi’s style of messaging and tweets has been used against the BJP. The argument remains: Modi should tweet more. It also means this: he might not tweet on many issues. Does that mean the BJP will not tweet on the country’s burning issues?

As of now, the BJP leadership is styled after individuals, revolving around a few leaders such as Amit Shah, Narendra Modi, Arun Jaitley, or a few more. To be the most inclusive party for the 21st century India, the BJP needs to quickly adopt a collegium-style of decision-making. Its national decision-making bodies must have representations from all states and prior to each meeting, members should be asked to submit a set of ideas before the collegium that should debate and adopt workable ideas. We live in a digital age.

To be the face of the 21st century India, at least 50 per cent of the top 100 BJP leaders must be women. There must not be any compromise on this. Women are the face of modern civilisation and with them the BJP could look to the voters as the face of civilisation for the modern times. It is sad that the BJP government is not even seen speaking on women’s issues. A proposed bill to give women one-third seats in parliament and state legislatures is not even being discussed. Yes, the BJP cannot alone enact this law but can it also not speak, or organise seminars?

Tragically, and I know these are strong words but contemporary India is an intellectually bankrupt nation. Our total intellectual thinking is geared to the quota debate in the nation’s political life. Secular parties promise 5 per cent quota to Muslims. There is a way the BJP can make the quota debate redundant in the nation’s politics. The party needs to call for a conference of ideas and adopt a bold national initiative: all children of BPL (Below-Poverty-Line) card holders irrespective of their castes and religions will get free books, free clothes and free education till the age of 18. It is doable.

The BJP must take the ‘minority’ issue seriously. Its leaders must tell Muslims this: we do not promise communal ‘secularism’ and 5 per cent quota but we promise all Muslim girls will be taught mathematics, economics and sciences from Grade 1. The Right to Education requires the Indian state to give children of 6-14 years educational outcomes which must be matched by madrassas or they must be shut down as anti-constitutional. ‘Minorityism’ also resides in our failing Rule of Law and riots. The BJP must debate zero tolerance policing and work for radical police reforms.

Also, the BJP has a certain past which need not be its future. Clearly, a very small group of motormouths has dented the party’s image. In a democracy and free society, do not issue fiats to stop them from speaking. The BJP leaders must not act as autocrats who will issue their politicians directives about what to speak and what not to speak. That is not democracy’s way. The BJP must create a platform where motormouths should debate the nation’s constitutional values and with the assistance of constitutional experts be tasked to chart out a Vision 2030 for the BJP.

The BJP must adopt new issues for its future politics. For example, the BJP must publicly adopt gay rights and advocate abolition of Section 377. India’s youths, the next-generation voters, are ready to accept it. Similarly, BJP leaders must be educated to talk publicly about green technology issues instead of walking into the West’s climate change debate. As Prime Minister Modi gave new issues such as Swachh Bharat to the nation, the BJP needs to discuss and find newer nation-building issues every day and add to the nation’s agenda.

Finally, politics is also about educating people. The BJP must speak bluntly to people on new issues. For example, argue this boldly: if airlines and buses can be run by private entrepreneurs, how is that the Indian Railways cannot allow private companies to run trains? The railways and roads are the face of the government. Take the road to the door of every household. PM Modi is already working on electricity and cleanliness for all. Schools and police stations need total revamp from ground zero. Speak loudly against dynastic leaders. As you fight elections, fight for good politics, new politics.

(Disclaimer: This writer is not available for any political consultation and affiliation. This article is written solely in the interest of the people of India.)