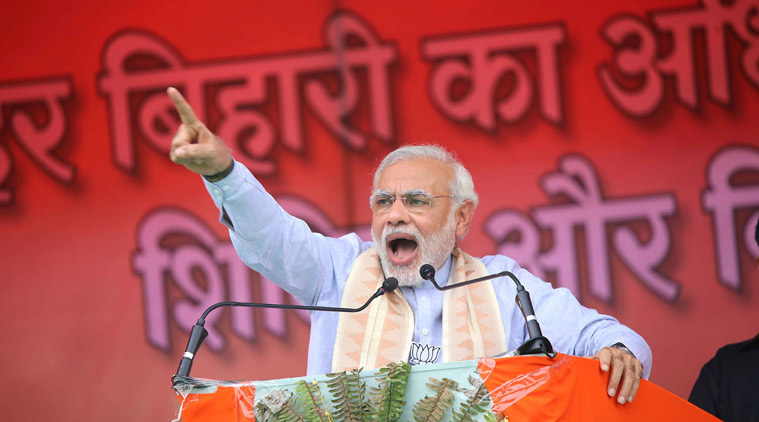 In continuation of the series on the upcoming watershed Bihar assembly election, let us examine the developments in the last few weeks and try to find if it shows any clear indication.

Narendra Modi in his rallies sets agenda for his opponents, and they keep responding to him for the next two weeks till his next political rally. Such behaviour shows that the opponents are low in confidence and unsure of themsleves.

In desperation Nitish Kumar once again ordered mass transfers of DMs and SPs to gain some advantage. In yet another desperate act, he announced 35% reservation for women in all Govt. services with immediate effect. But his announcement of Rs. 2.70 lakh Cr special package for Bihar, saying that he can throw more “crores” than Mr. Modi, was utterly baffling.

I wonder how such a senior leader can so foolishly support a non-entity like Hardik Patel, that too of a different state? And he thinks it will give him mileage in a complex state like Bihar? It did not end there. He brought Arvind Kejriwal to garner his support. Arvind Kejriwal is so meaningless in Bihar elections that I do not wish to waste more words. And then there were visuals or protesting madrasa teachers being beaten up by Patna police. Unbelievably stupid of Nitish’s administration.

These are acts of desperation and confirms that Nitish is feeling the heat of acute anti-incumbency and sensing the inevitable defeat has made him both irritable and combative.

[It is entirely unimportant and irrelevant, what others think or speak about you. The most important point is, what you think and know about yourself.]

In the history of Indian politics, Nitish must be the first sitting CM who will contest for less number of seats than the number of sitting MLAs he has.

In another embarrassing move, two JD(U) and one RJD influential MLAs quit their party to join BJP, citing suffocation in the grand alliance. One among them is Renu Kumari Kushwaha, once a very close confidante of Nitish and the other Dr. Sunil Kumar from Nitish’s home turf Nalanda.

The so-called master strategist Prashant Kishore was also sidelined from JD(U) core campaign strategy. To be fair to him, he did lack the enthusiastic volunteers that Modi enjoyed in his 2014 campaign.

When senior JD(U) Ministers like Ramai Ram says that contrary to surveys, RJD might win more seats than JD(U), he is sulking if not speaking the truth. Many senior Bihar analysts are also suggesting the same.

In last post we concluded saying, “The spectacle of Nitish holding hands with Sonia Gandhi, Lalu Yadav, and Sharad Pawar would be priceless.”

However, it wasn’t a spectacle at all. It was a sparse gathering, but not really a flop as many Hindi newspapers seem to have claimed. Whatever be the number, it was largely a good political rally. Those who made it were out and out Lalu Yadav supporters. RJD workers hijacked the rally and JDU flags were obscured. Despite being out of power for a decade, it was RJD’s cadre that managed the crowd and controlled the arrangements. It was more a show of strenth by Lalu Prasad Yadav to his alliance partners rather than to NDA.

Among the top leaders it was Sonia Gandhi who spoke first. Despite Congress having zero base left in Bihar, she tried her best to appear ruthless but statements like “Lalu Yadav has a pivotal role in the development of Bihar” made it hilarious.

Next speaker was Chief Minister Nitish Kumar. It wasn’t surprising that Nitish did not enjoy any regular claps and roars while delivering his punch lines. Why would RJD workers be enthusiastic about Nitish? It exposed JD(U)’s weaknesses, and it was showing on Nitish Kumar’s tensed, uneasy face.

In any political rally, the last speaker is general the leader and the most important one. Lalu Yadav’s speaking a the very end betrays evidence of Nitish’s diminishing position and general lack of confidence. Expectedly, Lalu did not utter a word on development and straight away played the caste and religious cards openly. Desperate looking Lalu Yadav had to resort to emotional clarion call to fellow Yadavs. It suggests two things: One that he senses a crack and the other that Nitish is rightly skeptical of those voters. Once Lalu finished speaking, Nitish reminded him of the ‘Dalit’ remark and he responded by calling BJP an ‘anti-Dalit’ party, an inadvertent admission that Dalits votes are consolidating behind NDA.

Many district level RJD leaders were fuming over Congress and specially JD(U)’s incapability to mobilize crowds. Senior RJD leader Raghuvansh Prasad and JD(U) MLA Kaushalendra Kumar accepted that the rally was not up to their expectation. Nitish, as some friends reported, was so disappointed that he skipped the pre-planned tea party at Bashishth Narayan’s house and drove back to his residence quietly. If rallies and crowd responses are parameters to judge the direction of the electoral winds, Nitish should be a troubled man whose lack of strength was has been exposed.

One more factor that I keep repeating is that Lalu is a ruthlessly shrewd politician, and he has every reason to hate Nitish personally. Nitish has everything possiible to have him exiled from the political stage. Every political development in Bihar is indicating a slow surge in RJD and if Lalu Yadav manages to win even few seats more than JD(U), we can imagine Nitish’s fate!

NDA also has a few reasons to worry too. The smallest partner, Kushwaha’s RLSP, is becoming a pain for them. RLSP is more interested in expanding their base for the next election rather than focusing on winning this one. It was reported in media that Lalu was behind Kushwaha’s unreasonable demand that they might go for a post-poll alliance, but the new vigilant central leadership of BJP got a hint of the same. BJP might consider ending the partnership with them.

NDA is expected to announce the seat sharing arrangement soon. Reports suggest that BJP will contest on 150 plus seats, and remaining will be shared by other partners, of which LJP will get half. Managing a peaceful seat distribution is a critical task for the NDA. BJP will continue tolerating people like Shatrughan Sinha till the election ends so as to avoid disturbing the prevailing momentum.

Very few Indian leaders have enjoyed this type of craze since independence as Narendra Modi does. Of course, NDA rallies were all mammoth in comparison to Parivar rallies and cadre-based political parties are good at mobilizing crowd. BJP has a strong cadre, so they can easily mobilize more people, RJD being the next in the state, they also managed a reasonably good crowd for the Swabhiman Rally on their own.

The most visible difference between “Swabhiman Rally” of Parivar and “Parivartan Rally” of NDA was not only in terms of enormity, but also the composition of attendees. Unprecedented number of youth in the crowd and their craze was worth noticing which reminded me of Modi’s “Hunkar Rally” in 2013. There are more than two crore voters in Bihar aged below 30. The majority of this lot in all possibility will cut across the caste matrix and vote for hope and development. Every recent election results confirm that people punish those who create hurdles in the progress of the nation. But only Narendra Modi’s successful rallies are not going to win an election. The most important factor would still be the ticket distribution. If the BJP manages to fine-tune this at the constituency level while carrying on with the momentum, it would be difficult for the opposition to reverse the mandate given a year back.

Pollsters and media houses conducting surveys are at sea on Bihar poll projections. You will not find a single media house or psephologist clearly predicting on Bihar Polls and those hazarding an indication sound unsure of their own predictions! But the fact is that the signs are clear and does not suit their narrative. If they give the Parivar a clear lead against the visible wave in favor of NDA, they are scared that they may end with the proverbial eggs on their faces.

This is going to be yet another wave election, and the wave seems to be in NDA’s favor. With complete responsibility and without hesitation, I predict that NDA is going to win the Bihar elections with a clear margin while Nitish Kumar is heading towards certain political death.