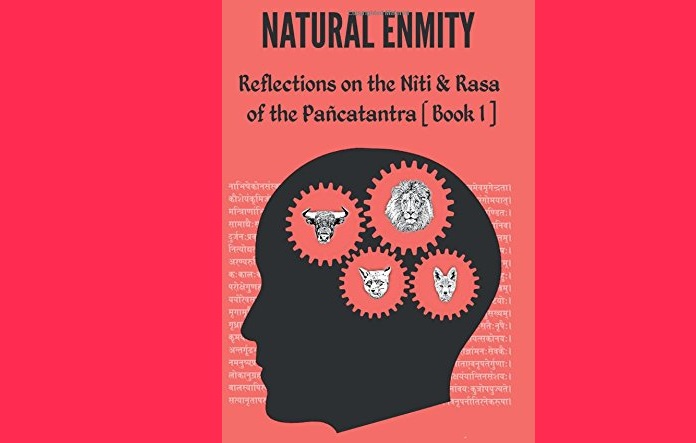 The book “Natural Enmity- Reflections on the Niti and Rasa of the Panchatantra [Book 1]” by Ashay Naik is available for purchase from Amazon.

Ashay Naik’s book, “Natural Enmity – Reflections on the Niti and Rasa of the Pancatantra [Book 1]”, is a fascinating and scholarly commentary on perhaps the most famous of all animal-tale anthologies.

The Panchatantra, like much of great Indian literature, is multi-layered. It is a fable told through animal stories. It is a brilliant exhibition of the frame-within-a-frame storytelling concept, outdone perhaps only by the Mahabharata. This style went westwards, resulting in the Thousand and One Nights and later the Canterbury Tales. The Pancatantra lends itself to a simple reading and interpretation, making it ideal for children to read and enjoy when young. As one grows older, and hopefully, wiser, and if the interest should awaken itself, the same text then reveals its myriad facets to the reader. The Pancatantra is perhaps the greatest exemplar of this aspect of Indian literature.

Like most Indian texts that have been read, analyzed, and distorted, by Western scholars, the Pancatantra has also suffered a similar fate. As Ashay points out, Western narratives have tended to characterize the Pancatantra as either “politically immoral” or “socially oppressive.” Such mis-characterizations perhaps reflect more the agendas with which Western scholars have approached Hindu and Indian texts than the texts themselves. As has been the case with most Western scholars writing on Hinduism, a constant theme has been the almost unimaginable amount of vitriol directed towards the Brahmins. Therefore, when a McComas Taylor writes, “The Pancatantra is an emanation of brahmincal power, a social manifesto, at once the product and the producer of orthodox tradition, one of whose effect is to perpetuate the privileged position of one section of society to the disadvantage of another” it is but yet another example of the ill-informed, biased approach, and perhaps even Hinduphobic agenda, that drives much of the Western academic output on India.

Anyway, coming to Natural Enmity, Ashay’s book is divided into two parts – The Frame Story, and the Sub-narratives. The Frame Story is where the main story progresses, of the intrigues that Damanaka and Karataka, ministers in the court of the lion king, Pingalaka, and their plotting to remove Samjivaka, the bull, from the court of Pingalaka. The Sub Narratives cover the stories that are told within the frame story itself. Both the Frame Story and Sub Narratives contain Ashay’s insightful commentary.

It is the genius of the Pancatantra and a testimony to its longevity that several of the lessons from the story can be applied to even modern-day situations – even in the corporate world of the modern, post-industrial age. The parallels the Pancatantra invites the reader to draw could easily come from a management expert’s bestseller. Ashay’s commentary helps in precisely this direction.

The most illuminating reflections on the subject are arguably to be found in the thirteenth chapter of the book. I will quote from it at length:

“Piṅgalaka and Damanaka – the lion and the jackal – are the characteristic metaphors for the master and the servant, the king and the minister. The lion seeks only to fight wars and be hailed by one and all as the supreme leader. The jackal, who has resigned himself to play second fiddle, aspires to take control of the administration of the conquests, which is a matter of little interest to the lion.”

Not Samjivaka, but it is Damanaka that is the exemplar of the “servant” in today’s corporate, or political world. In the commentary above, isn’t today’s political world a stark reminder of this reality? One is tempted to draw modern-day parallels with India’s Prime Minister, Narendra Modi. He is a political lion, like Pingalaka, who has won elections and earned the right to be recognized as the party’s undisputed leader, and therefore the prime minister. Is his confidante, and the President of the BJP, Amit Shah, Damanaka? Perhaps. But of greater worry has to be those, sometimes derisively referred to as the Lutyens Durbar elite, who are in effective control of the administrative reigns of the nation. They stay, mostly, behind the scenes, but exercise their control over the administration to cement their continuing power and longevity, privately profiteering in cash and kind. Disrupting this breed of Damanakas is perhaps a tougher battle than most realize. At what point does an equilibrium establish itself between these two? Can it establish itself at all? Is there a Samjivaka in this entire plot of characters?

“What this means is that it is from here, in his capacity as a servant, that he will assert his power. He will not make a bid to become the lion himself or attempt to transgress in any other way the boundary which lies between master and servant. But he will influence the master to pursue his advice and embezzle the resources he is designated to manage. In this setup, the lion is not unduly worried by the petty mischiefs of his servant but on that account he always remains for the lion an object of despise. Furthermore, even if the lion is aware that the jackal has acquiesced to his status as a servant, he is fearful that the jackal may switch his loyalties to another master. The bitter engagement between the lion and the jackal, at once complementary and competitive, thus allegorizes the unwholesomeness which characterizes the inter-relationship between master and servant in the world.”

“What Piṅgalaka desires above all is a companion who possesses the virtues of nobility and magnanimity, typical of a master, and yet occupies the position of a servant who, as a result, does not pose a threat to him – and he discovers such a person in Saṃjīvaka.”

The most stable form of this master-servant relationship, without the insecurities that haunt the master, nor the angst that gnaws away at the servant, was in exhibit during the UPA’s reign of power from 2004 to 2014. Dr. Manmohan Singh was the Prime Minister, but the real power was wielded by the Congress Party President, Mrs. Sonia Gandhi. The relationship between the lion, Mrs. Gandhi, and the jackal, Dr. Singh, was at its most stable. What made this relationship stable was that Mrs. Gandhi had no fear that Dr. Singh would ever “switch his loyalties to another master”, nor was there ever any threat of a competitive displacement between the two. This stable relationship between master and servant provided the unbridled opportunity for the other servants of the state to “embezzle the resources” of the state.

“The jackal suffers from his own misgivings in this disagreeable state of affairs but life is hardly a paradise even for the lion, who must face a miserable loneliness arising from his distance from his servants, who are inferior to him in character, and from the other masters, who are his rivals.”

Here it is very, very difficult to not draw parallels with the corporate world. Take the charismatic CEO who is focused on setting the overall vision for the company, managing shareholder expectations, and being the face of the company. Or take the product management head who is focused on meeting with customers, following industry trends, and figuring out the direction the product should take to stay competitive. The execution invariably falls on the jackal – the person – who perhaps lacks the charisma or the ambition to aspire for the lion’s job. Being the trusted confidant of the master, the servant enjoys privileges in excess of his peers. This however comes at a cost. The cost being the target of his peers, who are either patiently waiting for the opportunity to pounce when the servant slips, or actively execute campaigns of disinformation and corporate intrigue to plot the first-among-servant’s demise.

“This is the illusion which Damanaka shatters when he asks Piṅgalaka to consider prudently: for how long can such a servant resist an attempt to become the master himself?”

Whether the CEO or a CXO, the fear is always there. There are enough examples in the corporate world of Presidents, COOs, or other executives who grew impatient with playing second fiddle. Their aspirations for the lion’s chair led to their downfall. Often it came at heavy cost to the company. The CEO survived, but the company was left weakened as a result.

In conclusion, it does not quite matter whether you read the Pancatantra first and then Ashay’s book, or vice-versa. In either case, you will have a better appreciation of the great Pancatantra. In that lies the value of Ashay’s book.