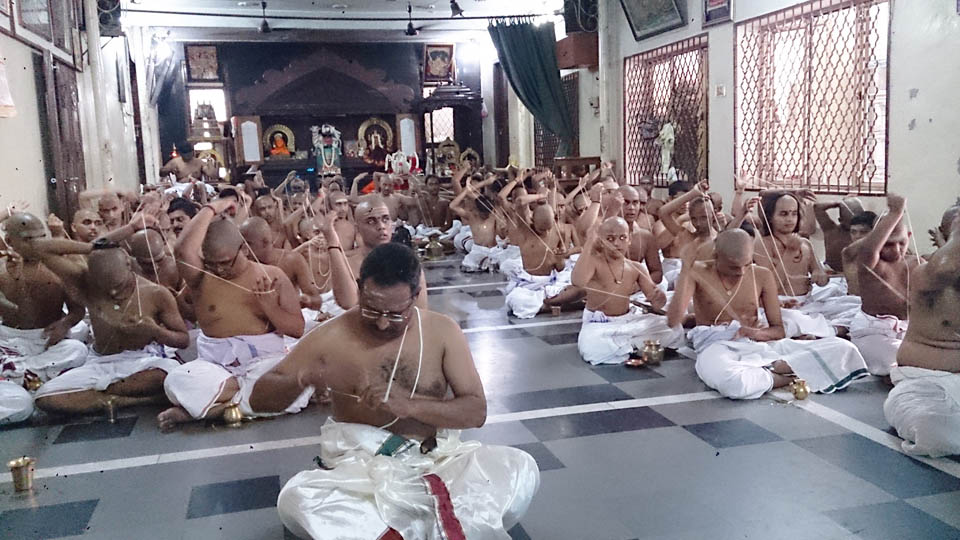 Nothing needs to be said about Aurangzeb, his bigotry and how he even detested the existence of Hindus. But even Hindu hating Aurangzeb had a Brahmin Pandit in his court. His name was Pandit Jagannatha. He had retained that Brahmin by way of money and other riches. Mrutyunjaya Homa and other religious fire related rituals was performed by Pandit Jagannatha. Which means that a vegetarian, mantra chanting Brahmin was imperative even for a bigoted Muslim King.

Similarly, this JD(S)-Congress coalition Government needs Brahmins too. In the erstwhile Congress Government they had totally ignored and abused Brahmins. But JDS not only established Brahmin Development Corporation but also sanctioned Rs 25 Crore grant for the same. This once again reaffirms the fact that Brahmins were needed during Aurangzeb’s reign and also by the JDS-Congress Coalition Government. This is the significance of Brahmins or so it may appear.

If the Brahmins are under this kind of impression, they are the biggest fools. It is delusional to assume that he has done a great favor by establishing a Brahmin Welfare Corporation and granting it Rs 25 Crore. It is hogwash and just another superstition that can find a mention under the Karnataka Anti-Superstition Bill. Brahmins jumped in glee the moment Kumaraswamy mentioned this and have forgotten the truth behind this move.

What are the facts? It’s worse than what was done to divide Veerashaivas and Lingayats. What are the benefits that Brahmins would derive out of Brahmin Development Corporation? Will they provide free education or scholarship? Will they bear the medical expenses of the poor? Will they provide Housing to those poor ones who still live in huts performing their ablutions? Or would they provide employment to Brahmins? What are the intent behind this? Brahmins have not asked such questions till now. Most likely it will never be asked too since they are celebrating funding received by the Corporation.

Just to remind the readers, there was an announcement regarding establishing a Vishwakarma Development Corporation. How many members of the community have been helped and developed? Forget Vishwakarmas, are you aware of the ugly politics in getting the post of the President? Till date this Corporation has never seen the light of the day and remains on paper. Do they need this anymore considering the long incessant wait? Now it is the turn of Brahmins

Who will be the President of this planned Brahmin Development Corporation? Smarthas, Madhwas, Vaishnavas? Saraswats? If a Smartha is appointed the President, would Madhwas accept it? If Madhwa become, would Sri Vaishnavas accept it? If Saraswat become, would Mangaluru Brahmins accept? This is yet another sinister attempt to sow distrust and discontent amongst Brahmins with objective of dividing them. Finally Kumaraswamy would end up on the side that would break and emerge victorious.

Imagine the narrative had BJP Government established the Brahmin Development Corporation – Congress would have called it communal and brahmanical. Is it secular if JDS-Congress establishes Brahmin Development Corporation? There is not a whisper from Congress now.  There was a demand to establish the corporation earlier too. This was sabotaged by Dinesh Gundu Rao who himself is a Brahmin. Why is he silent now?

That this is not a silly matter can be illustrated by this example. Take the lines in the Karnataka state anthem that says Shankara, Ramanuja, Vidyaranya… Basaveshwara, Madhvara divyaranya that was changed to Basaveshwarariha divyaranya. Madhwas were up in arms for excluding Madhvacharya and vehemently opposed it. It was a matter of a very animated debate for long time. When you have Shankara and Ramanuja named, was inclusion of Madhva a big challenge? Now when you celebrate only Shankara Jayanti do you think Madhvas would be silent observers? No way would that happen. To claim that Kumaraswamy would be unaware of these machination is an insult to Deve Gowda.

Mind you, this is a question asked by me, an ardent follower of Shankaracharya. Why not observe Madhvacharya as Kannadiga? Irrespective of whether we agree with his philosophy or not, shouldn’t we bow our heads for to his monumental knowledge? Isn’t Madhva not deserving enough to warrant a Madhva Jayanti celebration?

How do you expect Kumaraswamy to be aware of Madhvacharya? Do you, who keep screaming secular at the drop of the hat, even know anything of Ramanujacharya? He was driven out of Tamilnadu and did remarkable service in Karnataka. Temples of Srirangapatna & Melkote as primary testimony to that, there are many temples, temple ponds etc. in Old Mysore and Hassan regions established by him. He got initiated in Thirukoshtiyur by Guru Goshtipoorna to the ashtakshara mahamantra (8 lettered sacred hymn) Om Namo Narayana. Despite clear instruction of Guru not to reveal the mantra to anyone, he went up the peak of Vishnu Temple tower and screamed the same delivering it to the entire village and not just for Brahmins, saying God should be seen for every religion and castes. Why is his Jayanti not observed given his “secular” credentials by todays’ standards?

Do they know how the Acharya Trios are trusted, revered and followed by the Brahmins? This idea of celebrating Jayanti of one the Masters is to incite and to trigger a dogfight amongst the Brahmins in the society. Not realizing this, Brahmins are already jumping in joy as if they have chanced upon some treasure.

If the concern and love for Brahmins was real and intent was to develop Brahmins, they could have directly done the same. Would they have limited the development of Dalits, Schedule castes & tribes to certain groups? They could have helped economically weaker Brahmins with free bus passes, concession in the School/College fees, concession in the age limit while applying for jobs – isn’t that the right way to develop? Instead establishing a corporation or a society, or celebrating Jayanti. This only proves that Kumaraswamy is as politically cunning as his father Deve Gowda – he is the true son of the father.

Already affected by the announced increase of petrol prices, & more levies on the middle class, he has announced unconditional waiver of loans. His town criers are already talking as if they have already done it and also propagating that he is pro-Brahmin.

Pandit Jagannath the court poet of Aurangzeb writes Dillishwarova Jagadishwarova, meaning the Lord of Delhi (Aurangzeb) is the Lord of the world. Similarly, JDS-Congress combination merely announcing Brahmin Development Corporation and sanctioning Rs 25 Crore is being praised by thrilled Brahmins. It requires no saying that the way they corrupted the minds of Veera Shaivas and Lingayats into believing that they are different and ought to fight with each other, they have now set out to create a division by sowing sense of superiority amongst Brahmin sects like Smartha, Madhvas, Vaishnava, Shrivaishnavo, Saraswats. It is quite evident. This fight amongst Brahmin could well be far more vicious than the division of Lingayats and Veerashaivas.