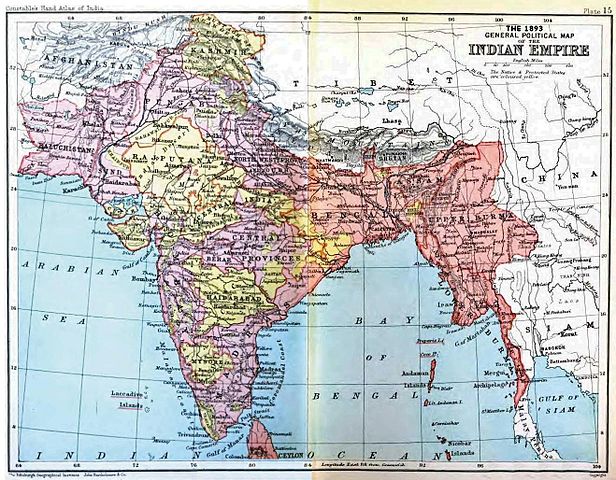 Mr. Ram Madhav stirred a hornet’s nest recently by talking about Akhand Bharat. Our electronic media had a field day with ready primetime material over 3 days, more may follow.  I am surprised by the pained efforts of BJP on one side disowning Ram’s statement and RSS on the other side trying hard to justify Akhand Bharat only as a cultural idea not a geographical or political idea.

May be, Ram Madhav chose a wrong forum to express his views. Anchor, Mehdi Hasan has pronounced that all non-Muslims are like animals, clearly he has no respect for other religions. You cannot lose your cool once you have said something from your heart, sitting on a pro-Islamic channel of a pro-ISIS government against a known Islamist. There is bound to be retaliation.

The topic of the discussion it was a dead give away. He should have objected to highly biased opening backgrounder of Al Jazeera itself and demolished their argument with facts. His opening gambit could have been assertion that Islam is a fascist philosophy while Hindutva is not, as it is pluralistic. That would have fitted well in talk of pluralist Culture of Akhand Bharat that world has witnessed  since eons from Western boundaries of one time geographical and now cultural from Afghanistan to North in Tibet,  South till Sri Lanka and West of its geography till Vietnam and Kampuchea.

Leaving the goofed up strategy aside, point is why Akhand Bharat raises heckles of sick secularist/leftists like Congress, Communists and their sponsored intellectuals. One – as soon as this subject comes up, Congress is reminded of its historical sin of accepting division of India. This, then,  leads to its history of pandering to orthodox Muslim leadership and alienating the then secular progressive leaders like Jinnah and Maulana Abdul Kalam. While Maulana opposed Pakistan till last within Congress, Jinnah walked out to claim separate homeland for Muslims, thus paving way for Pakistan.  2. This error was further compounded by not listening to highly reasoned and sharp observation by Dr. Ambedkar that there should be exchange of population.  Ofcourse, many Muslims would still have stayed back with clear understanding that they have same rights as all other citizens of India with no privileges as minorities.

Left-secular propagandists talk about Hindutva forces responsible for partition alongwith Muslim League. They forget that seeds of partition were sown in 1906 by Ali brothers. Seeds were nurtured by misguided Khilafat movement that led to bloodbath, rapes, conversions in thousands by Moplah Muslims in Kerala iin 1920s. RSS was  not even born at that time. When Jinnah went ahead to enjoy the fruits of orthodoxy, RSS was still an infant organization limited to Nagpur and Central  Province region. Hindu Mahasabha leaders of the time were part of Congress since Congress was not a personal fiefdom of Nehru till then but an umbrella organization for freedom movement. The torch bearers of internationalism – Communists supported Pakistan, they were stooges of British in 1942 as their big brother Russia teamed up with British in WWII.

There are many apologists and escapists who reason that Hindus would have faced worse fate in an  Akhand Bharat. But, all that we have achieved may be postponing the pain. The kind of politics that is being played in the name of secularism will ultimately lead to even worse scenario in coming years. Look at secondary citizenship Hindus are suffering from in rural Bengal away from the eyes of media ensconced on cities. Rajdeep Sardesai excused himself for not reporting such incidents by talking something like ‘tyranny of distance’. Look at Kerala where all key ministries are controlled by Muslim League and where Hindu population has for the first time dropped below 50%. Refusal to allow unveiling of a Malayalee poet’s bust in Mallapuram and stopping midday meals during Ramadan two year back in Muslim majority districts are examples of tolerance of secular forces in Kerala.  Intolerance of Muslims to Hindu human rights is exemplary.  Look at competition to gain favours from Muslim vote bank and neglect of Hindu interests by nearly all political parties.  Ostrich like stance of our liberal secular ‘intellectuals’ is similar to European liberals who are finding to their chagrin how their culture is being overrun by refugees from Middle East and North Africa who were refused space by their own Land of God, Saudi Arabia and others.

Historical fact  is sought to be wiped from our people that British were breaking India since last 200 years, starting from Afghanistan and ending with Pakistan.  Missionaries in North East are still at it.

RSS is not the first to expound theory of Akhand Bharat. Seer Aurobindo had clearly affirmed that partition is a mistake, ultimately Pakistan will break and India will become one again.

I do agree that a ruling party office bearer cannot express views that may be distorted politically and diplomatic.  Having said this,  what does modern history tell us? Bangladesh broke away from Pakistan in 1971. Baluchistan that wished to stay with India was sacrificed at the altar of political convenience by Congress is ready to break out anytime, struggling and fighting Punjabi Pakistani domination bravely for decades. Sindh is never comfortable and has been put down cruelly and violently by same Punjabi lobby. Displaced Muslims who sought Pak land as their land of Allah have suffered worse ignominy as ‘Mohajirs’.

Thus, whether RSS wishes or not, whether Ram Madhav said this or not, chances of Pakistan imploding are a brutal possibility of history. Massive might of Communist USSR couldn’t keep it together. When RSS ideologue Mr. Dattopant Thengadi talked of breaking down of Communist nations at peak of their glory in 1960s people laughed at him.

At the same time unimaginable merger of Germanies and Vietnamese is truth of current history. Koreans could be next but for dictators of North Korea. But, how long can they stop the march of time?

It is moot point that RSS now talks about cultural unity not political unity. I believe this is correct position that gives due respect to nations that have already come into being and established their own identities. Though, dissociating itself totally from Mr. Ram Madhav’s statement may be expedient politically but doesn’t reflect well upon its image of sticking to its stand even at the cost of political correctness or popularity.

At a cultural level, sharing of common civilizational values is a truth nobody can deny. Our improved relationship with Bangladesh will cement further based on shared cultural values, not religion. Our relationship with Nepal inspite of all ups and downs and insensitive handling of Nepal for decades stays firm at people to people level because of strong shared culture.  Opinion about India in Shri Lanka has turned positive in a big way with due respect and attention given to it by Mr. Modi’s government.

Pakistan intelligentsia is increasingly speaking up against futile antagonistic behaviour against India that has gained them nothing. There has been loud thinking whether Pakistan was a mistake. They have almost admitted that continued anti-Indian sentiments  fanned by army run government to justify birth of Pakistan better be given up if Pakistan wishes to progress and give dignified life to Pakistanis. There are attempts to link themselves to ancient civilization of Bharat – talking of Mohanjodaro, Taxila as their heritage while earlier they talked of Mohammed Bin Kasim as their ancestor.

These are signs of sprouting of idea of Akhand Bharat in different idiom. In the history of mankind, a few decades or even a century is but a blip. We are nobody to shut the door to future.  If forces of nature and human longing for better life work together we might see economic and social integration of Akhand Bharat in coming years, though possibly  not political merger.

Responding to Mehdi Hasan – How Hindus Should Engage Their Opponents