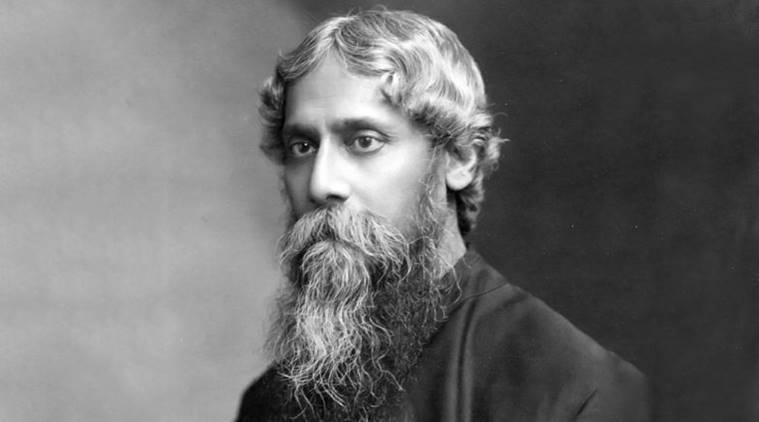 Rabindranath Tagore played a key role in India’s freedom movement, but he was no ardent nationalist. At heart, he was an internationalist and humanist. To the great poet and Nobel Laureate, humanity was “rich, large and many-sided” (1) which made it impossible for him to confine his humanity to just India. Like the great Indian sages of yore, he wasn’t confined by the boundaries of nationalism.

In 1926, during his visit to Mussolini’s Italy, he wrote: “I have said over and over again that the aggressive spirit of nationalism and imperialism, religiously cultivated by most of the nations of the West, is a menace to the whole world.” (2) In the novel ‘The Home and the World’, he wrote: “I am willing to serve my country; but my worship I reserve for Right which is far greater than country. To worship my country as a god is to bring curse upon it.”

Again, in a letter to the Anglican priest and Christian missionary C.F. Andrews, he explained: “This is the ugliest side of patriotism. For in small minds, patriotism disassociates itself from the higher ideal of humanity. It becomes the magnification of self, on a stupendous scale – magnifying our vulgarity, cruelty, greed, dethroning God, to put up this bloated self in its place.” (3)

During the freedom movement, Tagore was strongly committed to secularism. He, in fact, blamed Bengal’s nationalist Hindus for engaging only with the highly educated classes. According to him, this was one of the reasons why the Muslims, did not generally respond to the nationalist call. (4)

After the assassination of Swami Shraddhanand by an Islamic fanatic in 1926, when the communal situation all over India had taken an ugly turn, Tagore in a homage to the swami wrote: “India has two major communities – Hindus and Muslims. If we think that we can achieve our welfare by excluding the Muslims, we shall be committing a grave error. Out of anger, one may say that while building the roof we shall erect not eight but five pillars, because we hate the other three pillars – yet that will not lead to erection of a stable and strong roof….When the Swadeshi werewolf reached our country I was active in it. The Muslims did not join it, mostly they were against it. Some of our leaders then said: Let us go ahead totally ignoring them. But none of them queried: Why are they opposed to the Swadeshi Movement? We leant nothing but ignored the gulf of difference.” (5)

In 1931, during the Civil Disobedience Movement, he stated: “A country where religion divides the land, that is an accursed land. A country where religious beliefs pollute political wisdom, who can save such a country? Yet the Hindu and Muslims must unite in the common cause of giving birth to independent India.” (6)

Being an anti-nationalist, the poet blamed Hindus for the growing divide in Bengal. According to him, “As our nationalists put on Hindu overtones, the Muslims also start feeling they should assert their separate Muslim identity. The Muslims now want to be equal with the Hindus in all respects. We should whole heartedly support this effort of the Muslims.” (7)

While Tagore was what you would describe as a card carrying secular in today’s popular discourse, he did not hesitate from offering an accurate assessment of the Indian Muslim’s psyche. First and foremost he understood that the Indian Muslim’s loyalties could be easily hijacked. So for instance, a Moroccan Muslim or a Kazakh Muslim would first be loyal to Morocco or Kazakhstan, but for most Indian Muslims, Hindu-dominated India wasn’t his first preference. He would offer his loyalties to even barbaric, stone age Afghanistan. This in Tagore’s view was a huge stumbling block for religious harmony.

“A very important factor which is making it almost impossible for Hindu-Muslim unity to become an accomplished fact is that the Muslims cannot confine their patriotism to any one country. I had frankly asked the Muslims whether in the event of any Mohammedan power invading India, they (the Muslims) would stand side by side with their Hindu neighbours to defend their common land. I was not satisfied with the reply I have obtained from them….. Even such a man as Mr Mohammed Ali (one of the notoriously fanatic Ali brothers, the leaders of the Khilafat Movement) has declared that under no circumstances it is permissible for any Mohammedan, whatever be his country, to stand against any Mohammedan.” (8)

According to Tagore, the reason for such intransigence was the very nature of the two desert cults. In a letter to Kalidas Nag he wrote: “There are two religions in earth, which have distinct enmity against all other religions. These two are Christianity and Islam. They are not just satisfied with observing their own religions, but are determined to destroy all other religions. That’s why the only way to make peace with them is to embrace their religions.” (9)

A man of Tagore’s vision could have easily foreseen the disaster waiting to engulf Bengal. In an eerie premonition of the 1940 Kolkata killings by the Muslim League goons and the partition of India in 1947, he wrote: “Meaningless ritual keeps the Hindus divided into hundred sects. So we are suffering from a series of defeats. We are tired and worn-out by the fortunes by the internal-external enemies. The Muslims are united in religion and rituals. The Bengali Muslims, the South Indian Muslims and even the Muslims outside India-all are united. They always stand united in the face of danger. The broken and divided Hindus will not be able to combat them. Days are coming when the Hindus will be again humiliated by the Muslims. You are a mother of children, one day you will die, passing the future of Hindus society on the weak shoulders of your children, but think about their future.” (10)

The irony of Bengal is that the leftists and liberals who try and appropriate Tagore as a Bengali, listen to countless hours of Rabindra Sangeet, enact his plays in New Delhi’s smoke filled Mandi House theatres, and claim to be diehard Tagore bhakts, will not cleverly avoid adopting his more practical words of advice. This isn’t unique to Bengal but is in fact a common affliction of liberals and leftist across India. Jawaharlal Nehru his camp followers too found it easy to attend UN sessions and preach world peace but were not prepared to do the hard yards of making India wealthy and strong. It was only when the Chinese rolled across the Himalayas that these liberals, leftists and Gandhians realised there was a need for a strong army, or any army.

Considering these lotus eaters still exist, they would do well to stop reading their Bhadralok poetry for a moment and listen to what the bard said about the existential threat looming over the country: “Weakness harbours sin. So, if the Muslims beat us and we, the Hindus, tolerate this without resistance-then, we will know that it is made possible only by our weakness. For the sake of ourselves and our neighbour Muslims also, we have to discard our weakness. We can appeal to our neighbour Muslims, ‘Please don’t be cruel to us. No religion can be based on genocide’ – but this kind of appeal is nothing, but the weeping of the weak person.” (11)

The election results of May 23 have shown that many Bengalis have woken up to the danger posed by communism, secularism and minorityism. The rest should wake up too before it is too late and Bengal passes into Islam’s digestive tract.