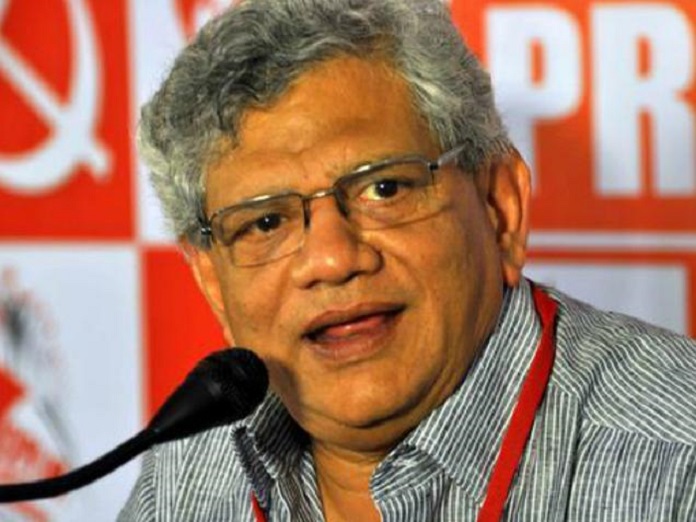 More than 150 countries around the world may have wholeheartedly supported the celebration of International Yoga Day, but our very own communist Sitaram Yechury – unable to digest the global celebration of an essentially Hindu tradition – is writhing in pain.

He has vented his frustration in an article in the Hindustan Times that reeks of his Hindu hatred in addition to being factually and logically incoherent.

In Mr.Yechury’s opinion, the declaration of June 21 as International Yoga Day by the UN General Assembly is not an accomplishment of any significant value for India. This is how Yechury begins his article:

Under this BJP government’s aggressive global campaigns, India appears to be seeking a global positioning not on the basis of its internal strength, economic or otherwise, but on the basis of such ‘accomplishments’ as having the UN General Assembly declare International Yoga Day on June 21.

The fact that a senior communist leader in India fails to see the potential to leverage the acceptance and spread of Yoga across the world as a means to further India’s global influence and power is a testament to the monumental intellectual bankruptcy inflicting the communists in India. But Yechury’s bigger problem is that a person no less than the Prime Minister is himself driving the project:

A PM-led government patronaged event on Delhi’s Rajpath, where public gatherings have been banned since the demolition of the Babri masjid, is aiming to enter the Guinness Book of World Records as the largest public participation in yoga exercises.

Well, Mr. Yechury, should we not ever conduct a public demonstration in Rajpath because public gatherings have been banned there since the demolition of the Babri Masjid? Don’t you think that a mega demonstration of yoga is the best way to restore the Rajpath for public events? Perhaps, Mr. Yechury would not have had a problem with a public gathering in Rajpath if it was organized by say, the All India Muslim Personal Law Board or some Maoist group. But because it is the celebration of Yoga and is driven by a BJP government, Mr. Yechury’s heart burns.

Let’s see what Yechury has to say next:

There can be no dispute over the practice of yoga postures improving the quality of life. Leaving aside the controversies over the promotion of a Hindutva agenda, such a mega marketing exercise definitely smacks of a dubious effort to Hinduise our richly diverse people…

This is the part where Yechury cleverly attempts to sound pro-Yoga and anti-Hindu at the same time and in doing so, scores a self-goal. Also, Mr. Yechury exhibits his primitive understanding of Indian society when he says that an effort to Hinduise our society would be detrimental to its diversity.

It is unfortunate that Mr.Yechury’s communism has clouded his thinking, for he does not realize that our society is so richly diverse precisely for the reason that it is still predominantly Hindu.

Unlike totalitarian ideologies like Yechury’s Communism and Islam, which believe in unity in uniformity, Hindusim celebrates unity in diversity. In fact, the aim of Yoga — which etymologically stems from the Sanskrit root Yuj, which means to unite or to bind— is to unite its practitioner to the ultimate principle behind the universe, the universal consciousness.

But acknowledging this philosophical position would mean that Mr. Yechury would have to concede the undeniable truth of Yoga being an essentially Hindu practice, which he desperately tries to divorce from its Hindu roots. Yechury continues:

Yoga is an ancient Indian set of practices that predates the Vedic civilisation. Several seals discovered at the Indus Valley Civilisation sites depict figures and positions resembling yoga meditation poses. The Rig Veda and various later Upanishads mentioned this term. The Katha Upanishad, believed to be composed between the fourth and third centuries BCE, describes yoga as the steady control of the senses leading to a supreme state. The Buddhist Pali Canons and earlier Jain texts also speak of meditative postures to liberate cognition. There are Patanjali’s yoga sutras. The Bhagwat Gita gives the descriptions of karma, bhakti and jnana yogas.

Here, Mr. Yechury ingeniously tries to delink Yoga from Hinduism by stating that Yoga predates Vedic civilization. But he does not realize that this statement of his not only exposes his shallow understanding of Yoga, but also smacks of his ignorance of Indian history.

Regardless of the fact whether pre-Vedic Indians used the appellation Hindu —which was a much later usage— Yoga was practiced, preserved and evolved by an unbroken chain of Yogis starting from the pre-vedic days to the most modern times. It is only recently that people other than Hindus have started to make a study of Yoga and its practices.

Is Mr. Yechury trying to tell us that people before the Vedic period were not ‘Hindus’ – in today’s understanding of the term?

The other fact that Mr. Yechury perhaps does not seem to realize is that the science of yoga evolved simultaneously with the philosophy of Hindusim.

Yoga was seen as a scientific method to arrive at the final aim of all Indic spiritual traditions—including Buddhism and Jainism— of attaining liberation or moksha. Also, the purpose of yoga was the quest for experiential truth which is unique to Hinduism, unlike faith based Abrahamic religions like Islam and Christianity.

Swami Vivekananda in his commentary on Raja-Yoga, explains this primary philosophical pursuit of yoga:

The teachers of the science of Yoga, therefore, declare that religion is not only based upon the experience of ancient times, but that no man can be religious until he has the same perceptions himself. Yoga is the science which teaches us how to get these perceptions. It is not much use to talk about religion until one has felt it. Why is there so much disturbance, so much fighting and quarrelling in the name of God? There has been more bloodshed in the name of God than for any other cause, because people never went to the fountain – head; they were content only to give a mental assent to the customs of their forefathers, and wanted others to do the same. What right has a man to say he has a soul if he does not feel it, or that there is a God if he does not see Him? If there is a God we must see Him, if there is a soul we must perceive it; otherwise it is better not to believe. It is better to be an outspoken atheist than a hypocrite.

Seen in this context, one would understand the fallacy of trying to view Yoga in a limited time frame. Also, Mr. Yechury does not seem to acknowledge that all of yoga’s ancient practitioners have been Hindus and only in modern times, have non-Hindus started practicing it. Practicing yoga does not make one a Hindu. Similarly, just because non-Hindus or non-Indians can practice yoga does not change the fact that yoga is a Hindu tradition.

Any keen observer of Indian politics would notice that there is a discernible pattern among left-liberal thinkers in India: if a certain Hindu practice is well taken by the world and is appreciated, attempts are made to delink it from Hinduism and at the same time, if a certain practice is looked down upon and is condemned, every attempt is made to link it with Hinduism, even if it does not find any scriptural sanction.

A case in point is the mention of the “caste system” which Marxist historians and sociologists invariably present as an integral part of Hinduism, even though it finds no sanction in any of the Hindu scriptures. To put it in simpler words: if praiseworthy, delink it from the Hindu; if blameworthy, heap it on  Hinduism.

However, Mr. Yechury does not desist from acknowledging the fact that Yoga is universally accepted as bringing tremendous health benefits to its users, perhaps, for the fear that he may sound ‘unscientific’ or ‘irrational’; communists have a penchant for calling themselves rationalistic and scientific.

All the same, Mr.Yechury conveniently attempts to change the goal post — a well mastered strategy of left wing intellectuals in India — by highlighting the need for addressing the country’s poverty.

Whatever may be the implications of all these, yoga exercises are universally recognised as ensuring a healthier existence. But the moot point is that people have to first live, only then can they improve their quality of life. Such concerns, however, appear mundane for Modi’s campaigns….

….People have to live first in order to improve the quality of their life through yoga, is it not? What our country needs today is not the ‘marketing’ of such not so subtle demonstrative activities seeking to promote the Hindutva agenda but concrete measures that the prime minister and the government must undertake to remove such gross deprivation of our people.

Mr. Yechury then goes on to quote statistics from various UN reports on human development index, poverty, food security, slavery, malnutrition, lack of basic health care and illiteracy. Nobody denies the fact that India needs to do more to uplift its poor. But what Mr. Yechury fails to note is that the country is in such a dismal state precisely because of following communist and socialist inspired statist control of the economy which sapped all the entrepreneurial energy of the Indian people for six long decades after independence.

It would do well for Mr. Yechury to look at the pitiable condition of his own backyard – the states of Kerala and West Bengal, where his fellow communists were in power for decades together. People of India came out of the delusion created by the communists and their ideological cousins in the Congress party and vehemently rejected them and their policies in 2014. It was precisely for this reason that the country overwhelmingly voted Narendra Modi to power, with the hope that he would liberate the country from the stranglehold of the communism-inspired poverty perpetrating ideas.

It is understandable that Mr. Yechury is frustrated over the fact that the country has rejected communism, whole and soul. It is high time that he too comes out of his worn-out dogmas and takes a fresh view of life. It would do him a world of good if he could come out of a blood-soaked ideology like communism and instead, make an earnest study of Yoga, which proposes a universal method for a harmonious living of humanity.

Mr. Yechury need not wait for too long to begin this new journey. June 21 is just round the corner. And Delhi’s Rajpath is not too far for Yechury.