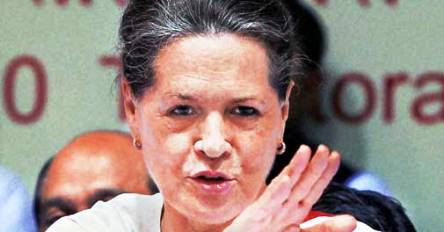 Some years ago Smt Sonia Gandhi created a stir by calling Narendra Modi by calling him ‘Maut ka saudagar’. A few days ago, she went back to the theme in her public appearance in Gulbarga charging Modi and the BJP of practicing ‘Zeher ki kheti’. It is obviously the work of a Bollywood script writer for Smt Gandhi is not known to be an Urdu scholar. But what is her own record and concern for life? Here is a little history.

A few years ago, the same Sonia Gandhi accepted the Order of Leopold, instituted by the Belgian royal family. The name Leopold, King of the Belgians is synonymous with the worst excesses of European exploitation of Africa. Leopold, the king whose name the award carries was a slave merchant who rivals Hitler as a mass murderer.

Much of the controversy since the story broke has focused on the violation of Indian law by a high official (Sonia Gandhi)— accepting an award that requires swearing allegiance to a foreign power. It is a legal technicality that ignores the moral dimension. Her acceptance was a sordid and ignoble act that smacks of servility and utter callousness to human suffering. (For the record, though founded by Leopold I, it was appropriated by Leopold II in 1908 by integrating it with his own order of the Congo Free State, which was the victim of his atrocities, more of which later.)

Sonia Gandhi being awarded the Order of Leopold

The name ‘Congo Free State’ is one of the great ironies of history, for Belgian Congo under King Leopold was a massive slave colony that was ruthlessly exploited for its rubber and ivory. According to a recent BBC report by Mark Dummet (http://news.bbc.co.uk/go/pr/fr/-/hi/africa/3516965.stm):

“Of the Europeans who scrambled for control of Africa at the end of the 19th century, Belgium’s King Leopold II left arguably the largest and the most horrid legacy of all.”

Leopold claimed he was taking over the Congo Free State to civilize the natives by bringing Christianity and Western capitalism to Africa. In the process “he turned his ‘Congo Free State’ into a massive [slave] labour camp, made a fortune for himself from the harvest of its wild rubber, and contributed in a large way to the death of perhaps 10 million innocent people.”

Leopold’s plan was to harvest as much natural rubber as possible from the forests before organized cultivation of rubber could break his monopoly. He was interested also in looting the ivory gathered by African tribes. His government created a force called Force Publique to terrorize and plunder the African natives into surrendering everything they possessed and provide also slave labor for harvesting wild rubber. Dummet quotes an eyewitness report:

One officer[’s] method… was to arrive in canoes at a village; the soldiers were then landed, and commenced looting, taking all the chickens, grain etc, out of the houses; after this they attacked the natives until able to seize their women; these women were kept as hostages until the chief of the district brought in the required number of kilograms of rubber. The rubber having been brought, the women were sold back to their owners for a couple of goats apiece, and so he continued from village to village until the requisite amount of rubber had been collected.

Companies operating in the Congo used prison stockades to keep hostages. If the men in the village resisted the demands for rubber it meant the death of their wife, child or chief… The Force Publique supplied military might under contract and each company had its own mercenaries.

Adam Hochschild in his book King Leopold’s Ghost— A story of greed, terror and heroism in colonial Africa quotes the Governor of the Equatorial district of the Congo Free State when the demand for rubber became ferocious: “As soon as it was a question of rubber, I wrote to the government, ‘To gather rubber in the district… one must cut off hands, noses and ears’.” The victims were often teenagers or even younger who were ‘punished’ in this manner for not meeting the quotas assigned to them.(http://www.wwws.org/articles/1999/sep1999/king-s06_prn.shtml )

Hochschild also notes: “During expeditions, Force Publique soldiers were instructed to bring back a hand or head for each bullet fired, to make sure that none had been wasted or hidden for use in rebellions. A soldier with the chilling title ‘keeper of hands’ accompanied each expedition.” Sometimes the soldiers saved bullets for their personal use like hunting by amputating the victims to meet their quota.

So if anyone deserved to be called maut ka sudagar—merchant of death—it was Leopold, King of the Belgians.

If Sonia Gandhi, a European of humble origins, feels honored to be admitted to an order that carries the name of this mass murderer because he was a European prince it is her prerogative. But she should do so in her own capacity as Antonia Maino, not Gandhi. Coming back to her propensity for name calling—those who live in glass houses should not throw stones at others.